Stacey’s Family Trip Day 4 or “Here, Son, give me your magic band. You don’t want that FOP FPP.”

Day 4 dawned with us making our way out of the Grand Floridian with all of our bags in tow and checking them at bell services as we made our way to AK. The bus was pulling away just as we turned the corner out of the front door. I called to the CM at the bus stop and she got the bus to stop for us. That marked the fourth time on our trip that we caught a bus just as it was about to leave! Great timing. Drivers were always so nice about waiting for us.

This was another club-level fastpass day; we had 6 booked but I pretty much knew that we were not going to use all of them at AK, as they have to be spaced an hour apart and we were leaving by 2:30. But, being able to book FPP’s at 90 days out guaranteed we would get FOP, and at the times we wanted. DS5 is not quite 44’ so he could not ride FOP. I had already done it once with my daughter, and also had already done KS (it’s fine but I’m not really a zoo person—yes, I know, many people think it is unfair to compare AK to a zoo.) So, DH took DD7 and DS5 off to RD KS (standby) while I went to do FOP twice; once on my MB and once on DS5’s mb (I had booked DS5 and I for a 9 a FOP FPP knowing I would use his band to get in one extra ride…hey, I did all the planning for this trip…didn’t feel guilty one lick as DS5 did not actually miss out on anything he could do). The RD crowd was lining up around and through Pandora…it was about 8:50. It was not apparent where to go if you have a FPP, but another person asked a CM holding a rope and she said to stand with her until 9 a.m. Then she led us across the RD standby line and we waited outside the FPP entrance until exactly 9 a.m., and then they let FPP holders start to scan in. Got to do this 2 x in a row and just loved it. I did notice that the pre-show varied a little (certain parts of it were sometimes omitted). Was done at 9:50, just as the rest of the family had completed KS and were walking to Pandora for DH to ride FOP with DD7.

While they did that, as a consolation prize, I took my son to get his face painted like a N’avi. I had just shown the movie Avatar to both kids for the first time a couple of weeks ago, so they were totally enchanted with Pandora and DS5 loved his face paint (super fast, $22) and got comments from most passers-by. He then proceeded to prowl around Pandora like “Jake Sully” and asked me to take pictures of him, so I obliged.

(Total side note: Does anyone else think that Jake Sully’s initials are a nod to John Smith? My little theory.) Then the drum show started and we were hanging out and watching that when DH and DD7 walked up having completed their ride.

It was 10:47 and we had an 11 a.m. FPP for NRJ. We tapped and got the green light. NRJ was neat for DS5 to be able to experience Pandora since he could not do FOP. I wouldn’t call it amazing. Well-done, though.
Went to lunch at Satuuli Canteen (theming amazing) and then all shared one smoothie at Pongu Pongu. Posed with the large Pandora robot thingy for a picture.
We had 45 min to kill before our FPP for Nemo, so we enjoyed a slow stroll around the park. It was a lovely day and it was really nice not to be in a rush to get to any ride. Kids stopped and played with things along the way and we saw a few street shows.

Then did Nemo (DS5 is an ocean-life-lover) and it was a hit. Exited to have a message that Dinosaur was down, leaving me and DS5 with an anytime FPP while DH and DD7 went off to do EE. I got a RS pass for that first. Interestingly it had no set return time, they said I could come back anytime. I had not planned on doing KRR (had not known if weather would be okay for getting wet) but it was a pretty good day and DS loves water rides, and close to Everest where DH and DD were, so we used our Anytime for that. Fortunately we did NOT get soaked and it turned out to be DS’ favorite ride of the trip (my take was that it was rather unexciting, as my Unofficial Guide suggested). Met back up with DH and DD7 and I rode EE with DD7 again. Noticed that the “ads” as you wait in line have your name on them. Mine said something like “Yeti Tea…’Hot’ –Stacey.” Pretty funny.

After doing EE again, we all met back up and walked out of the park.
We had to be back at GF by 3;30 for our pick up (Ultimate Town Car Service) to transfer to UOR. Our timing was again perfect for the bus, got our bags from bell services, and headed out to the Hard Rock Hotel as we once again bid WDW goodbye!

Overall take on staying club level: It was nice to have drinks and snacks whenever we wanted, but for the most part the food was not a real substitute for a filling meal. DH and I hardly drink and did not fill up on the desserts either. If we ate breakfast there (oatmeal and one day a mickey waffle), kids were pretty hungry 2 hours later. Lunch stuff was decent --they had roast turkey and veggies–but we were usually at the parks around lunch time. For us, it was worth it b/c I had a fall discount that, for whatever reason, applied only to club level rooms but not to standard rooms, so it made CL about the same as a standard room. And we were able to purchase the extra FPP’s. Next time, though, I may opt to save the money. The rooms themselves were no different and our room above the CL lounge was sooo noisy.

Our drive allowed a grocery stop (we were not staying club level at HRH) on the way and we arrived about 30 min later. DS5 did not, as was my plan/hope, nap in the car. To the contrary, he was off the rails with his sister. But happy. Oh well.

The front entrance of HRH was surprisingly unremarkable and bland; I was surprised the hotel does not make more of an exterior “statement.” Then, with only 3 people ahead of me and 2 people at the check in desk, I waited in line for 30 min to check in. No “room ready” texts here! Then DH had to stand in a separate line to get our park passes and that took another 15 min at least. Not a great or efficient check in system.
Our room, however, was great. We had a “garden” view but it really was a pool view. Second floor, 3 doors down from elevator had me a little concerned about noise but there were no issues, even on our last night when the Wallflowers were literally playing a concert in the lobby—which was the floor above us (yes Lobby is on 3). We didn’t hear a thing. I was impressed.

There was also more storage in the room at the HR than in the GF—better dressers and space under the dressers to stow suitcases. Also water in the bathroom was much hotter and better water pressure than the GF. In addition, the bathroom had a second, lower sink that was low enough for DS5 to brush his teeth without needing to stand on an upside down trashcan. The modern décor was a nice change as well; kids thought it was very hip. I had considered Portofino Bay Hotel but thought a change in style from the GF would be a fun way to break up the trip. Also had selected HRH for its closest proximity to the parks (which we ended up really appreciating throughout our trip).

After unpacking a bit, we headed out to the pool around 5 and swam for an hour. The slide was great, with a fun dip in the middle that the GF slide did not have. Kids loved the music playing at the pool (they said they could hear it underwater (as HRH advertises) but I didn’t think it was that noticeable underwater). We ordered dinner from the bar, poolside. It was tasty but very pricey—turned out to be more expensive than any of our other sit down meals at the big UOR restaurants. Not sure why there is a premium to eat at the pool bar but there sure seemed to be.
After pool, we showered and headed to bed….early admission was at 7 a.m. for Diagon Alley, which was pretty much before sunrise, so we closed our eyes and went to sleep, with dreams of Harry Potter dancing in the kids’ heads. 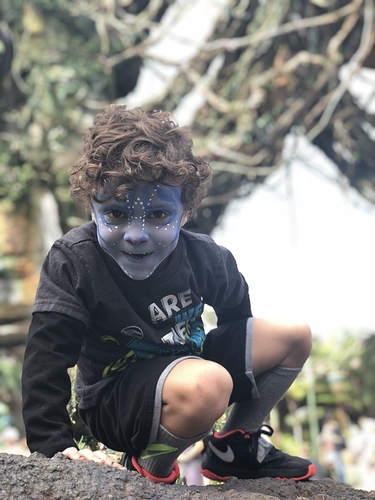 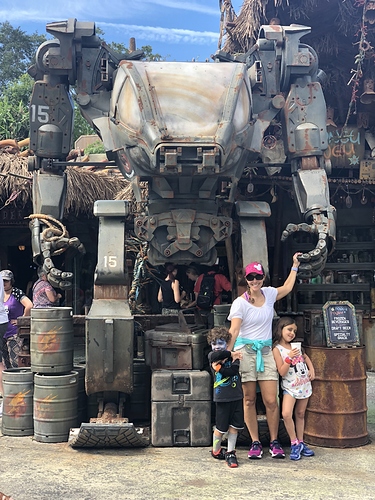 I did notice that the pre-show varied a little (certain parts of it were sometimes omitted).

My impression is they vary the FOP pre-show based on how quickly the group before you clears the room. If they need to stall some, they add some extra things - nice little trick that is very organic, but definitely noticeable on multiple rides…

Yes, that was my guess. On one of the times, we did not have the “decontamination” thing.

Thanks for the report! We are doing a similar trip in a month. Would love to hear more about UOR! Also I love the face paint! That is so cool and turned our really well. I could see my DS wanting to have that done!

The face painting turned out great, highly recommend it–fast and a great thing to do if one of your kids is not tall enough for FOP.

We loved HRH! I couldn’t really hear the music underwater either though.

And glad it wasn’t just me.

My son is 15 and may want that face paint!

And he should have it.