Screamscape posted a link to a video Disney put out about the upcoming Skyliner.

One part that I found interesting was the statement “3 lines”. I guess I had assumed it was essentially one continuous line (perhaps split up to keep the cables shorter). But stating this is 3 lines…I’m wondering what this means. This seems to indicate you will potentially have to transfer from one Skyliner to another in certain circumstances. The layout, however, I’m not sure what that means. Anyone have any insight?

Looks like Caribbean Beach station will be a hub/transfer station.

Looks like Caribbean Beach station will be a hub/transfer station.

Yep, that’s what it was described as when they announced it:

“The Disney’s Caribbean Beach Resort station will be the hub of activity for Disney Skyliner. This station is inspired by the open air village marketplaces of the Caribbean and will showcase the nearby resort’s architectural detailing and color schemes. At this station, passengers will be able to transfer gondola routes to reach their destination, or are invited to sit and admire the waterfront resort setting.”

I’m guessing the three lines will be CB to Epcot (via Riviera), CB to Studios and CB to POP/AoA.

Okay. Thanks. I guess I didn’t pay close enough attention the first time around! (Of course, the idea of riding this thing terrifies me, so I’ll admit I wasn’t fully engaged.)

So, those at POP or AoA will need to transfer to get to the parks. Got it.

So, those at POP or AoA will need to transfer to get to the parks. Got it.

Hmm, I hadn’t realized that. I wonder if that will make them less appealing? Though, after experiencing the Disney buses with my DS2, who has sensory issues, I would do anything to not be packed like sardines listening to my kid scream bloody murder for 20 minutes, while doing everything I can to just make sure he didn’t hit his head on something (I never minded the buses in the past, this trip made me despise them). I hope they don’t pack the skyliner cars like the buses. I get it, everyone wants to get home. We did try the Minnie vans once, but at around $40 with tip one way, wasn’t gonna happen every day. Unfortunately, with the little ones, they were the only option because of the car seats.

There won’t be any need to cram them. They’ll arrive continuously. I suspect for the most part, families will get their own cabin to ride. They hold 10 people in theory but Disney are apparently “assuming” or planning for an occupancy level of 8 per cabin.

Think of a busload of people loading in 2-3 minutes! There really should never be a long line except maybe right after the evening show, possibly at RD but even then it’s unlikely everyone from POP and AoA would arrive at CBR at the same time as everyone at CBR decide to board.

I think the idea of the Hub is to allow the 3 resorts, all of which are huge, access to both parks. Otherwise POP and AoA would have access to one, and CBR to another. Also, they are designed to be transport from the resorts to parks, not park to park (there’s the boat or walking path for that, or indeed a bus from the front of Epcot).

I worked around gondolas for a few years back in the day. Dopplemayr is the manufacturer of this gondola, they’re probably the best in the world. All the gondolas will be detachable and come off the support cable so people can get off & on safely. It’ll be the same at the end of the line.

I also think they’ll put a walking path of some type under the gondola, through the woods from CBR to DHS. Then there will be lighting and a way to access the cables/gondolas, as needed. I’m really looking forward to this, we’re staying at BWI in May and it sounds like they’ll be done by then!

The manufacturer of these gondolas Is known for their high-speed ski transportation. The CM will figure out ahead of time which parties have what number of people and sit them across from each other, to balance. It’s kind of amazing how many people they can put on a ski hill in an hour- the industry has completely transformed downhill skiing with these high-speed lifts since I was a kid and had to wait in line for 45 minutes or more…

They won’t have a walking path. There’s a major road and water in the way.

The emergency access is already there, from where they have been putting up the towers. And a special dock in Hourglass Lake for boats.

Have you seen the double bull-wheel design? Unique to WDW, but not at the Riviera as it’s midline. My guess is they just send down every 5th cabin empty from CBR for Riviera guests.

I’ve been improving my knowledge on these things, thanks to a guy called Liftblog over on WDWMagic. His real name is n his blog, Peter someone if I recall. Amazing how so many people have become so interested in gondola mechanics!

Too bad about the walkway, it would be a neat feature. I hope they don’t just leave a swath through the woods, very unimaginative and not at all Disney-like!

I agree that leaving a set number of cabins open is what they’ll do, too. If the line backs up the operator can always call for a few more gondolas to be left open from EPCOT or CBR.

Gondolas are an interesting thing! One of my favorite “behind the scenes tour” is of the tram at Jackson Hole. That’s a different system from a gondola because they don’t detach, but they are engineering marvels. These WDW gondolas are very big, too, not as big as a tram but bigger than most American gondolas.

It’s almost a tradition for young adults around here to spend a year or two being a liftie. I did back in the day. One of my good friends has a son who they’re trying to pry away from the ski resort- he says he’s going to law school but we’ll see…

Did you see the job advert that went up last week. Admittedly for a Senior manager, but maybe DS of friend could get a job as a “lifetime” at WDW?

Not enough snow in FL! This kid is a ski bum through-and-through! 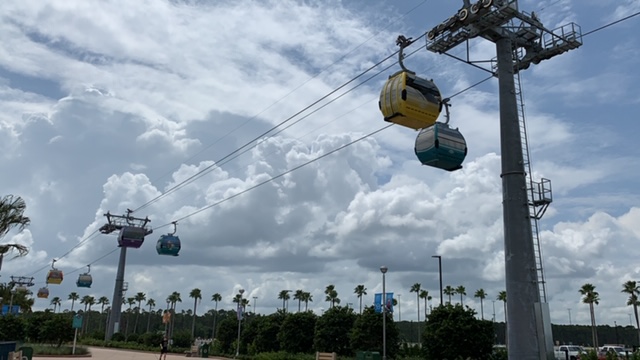 I wonder how much harder it will be to get through the international gateway after that?

Too bad about the walkway, it would be a neat feature. I hope they don’t just leave a swath through the woods, very unimaginative and not at all Disney-like!

I suspect that this is exactly what they’ll do. There will probably be an access road underneath for maintenance purposes, but it will not be guess-accessible.

I wonder how much harder it will be to get through the international gateway after that?

There will definitely be increased throughput at the IG, but only time will tell as to how much.