Getting super close to my fast pass section day and I’ve been pouring over each ride, prioritizing my fast pass selection and sweating a whole lot. And, after checking my custom plans (over and over again) and checking off all of my must-haves and cannot-misses, I’ve come to the conclusion that I need to SKIP FOP this time. And I have guilt. Make me feel better about my decision.

Here is who is coming along on this trip
DH (who “hated Avatar, so who cares about the ride?”)
Father-in-law (“I don’t even know if I saw that movie…”)
Me (gets motion sick even thinking about most rides)
DS6 (“All I care about is Slinky Dog and Star Wars…” and doesn’t even know FOP exists)
DD2 (Just turned 2 and cannot sit still for more than 30 seconds.)

It just doesn’t make sense to even count this ride on our plans. IF I was going to add this to the list, it would be my priority pass (the one I would try to snag first) which means seconds will go by on FP day when I could be grabbing Na’Avi River (which everyone would like), Slinky Dog, Peter Pan, etc. Plus, by having to do rider swap/child swap, it adds so much more time to our plans.

We already know we will return when DD is older and can ride this ride as well. So I think it makes sense to skip. Tell me I am right here.

Sounds like skipping it would be fine for your group. I skip it every time and I never feel guilty!

I get motion sick and I don’t want to feel terrible. I even skipped it during the Passholder Preview when the line was non-existent. I went through the queue and that was fine for me. DD24 did it and agreed that I wouldn’t like it.

Personally I think liking the movie or even having seen it is irrelevant. FOP is by far the best ride I have ever seen in my entire life. It’s so beautiful a lot of people actually cry at the end. While aesthetically very pretty, all members of our family thought Navi River was sort of boring. Sorry to contradict your plans, and I know others have different opinions, just giving you my honest thoughts…

Sounds like a solid decision to skip. Though the hatred for Avatar doesn’t really come into play (I also hated Avatar, but the ride has little to do with the movie in total.)

I am in the minority and found the ride “meh” anyway. I mean, it’s cool and all, but I had much more fun in Star Tours than I did on FOP.

Our last trip I didn’t get FOP FP because a party member couldn’t ride. It turned out we wanted to swap our last AK day and I would have been stressed about the FP if I had it. Instead we were able to swap and had a great day at AK. I don’t think DD even realized the ride was there.

I would not skip this ride. And I get terrible motion sickness. I just close my eyes when things start to feel woozy.

I just close my eyes when things start to feel woozy.

Not on this ride, at least not for me. If it were a more jerky movement simulator like MS - yes OMG yes! I found the “bike” movements on FOP very gentle - not aggressive.

Interesting! I don’t get sick, but i know if I start getting issues with my fear of heights, closing my eyes is the WORST thing I can do. I figured it was the same. Fascinating that it’s not.

I would have to close my eyes the entire ride!

This ride is an absolute no go for my husband (motion sickness) and younger son (he was 6 when I took him on it and he is emphatic that he is never doing it again). I think you’re making the right call for the majority of your party.

I will say that I’ve never seen the movie and I get motion sickness on very few rides and this is one of them. However this is by far the best ride I’ve ever done. DS8 ranks it right up there with SDD and 7DMT. I hope to split our FP for AK. I’m doing FOP with DS8 and H will do NRJ with DS6.

So, I think you’re making the right call however you may want to note the AK drop times for FP’s and try to snag a couple for your H and FIL that day. They can do it while you do the Pandora drums with the kids. Oh, and there’s a water thing at the entrance to Pandora that had my boys enthralled.

Oh, and there’s a water thing at the entrance to Pandora that had my boys enthralled.

What IS that supposed to be anyway?

Really? Are you sure the ride vehicle doesn’t move slightly side to side?

It does move quite a bit in 3 directions. This article explains it really well, but is quite long. https://www.coaster101.com/2018/12/11/what-makes-avatar-flight-of-passage-so-immersive/

So this is the relevant part. 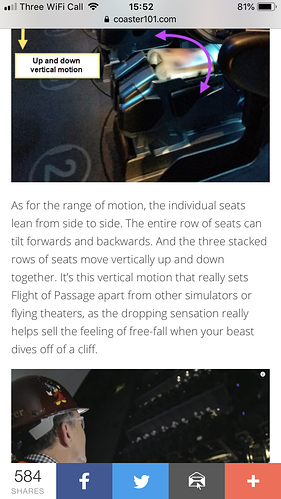 If nobody cares about riding FOP, then skip it. There’s no point getting it for the sake of it.

Do what makes everyone happy first. You can always try for a SDFP if it works out.

Currently I have us skipping 7dmt because we are staying off site and with the EEMH in Sept, we can never make a true RD. I can’t see waiting 40+ min for a 3 min ride. Might jump in line at end of night. I’d rather go do other in park rides, adventures, than wait.

The ride vehicle has movements.

It does not move in the way that you appear to be moving from the action on the screen.

A similar example is Star Tours. And to a lesser degree, Soarin.

The physical sensation is engineered primarily by the visual input, further enhanced by the vehicle movements. The actual vehicle motion isn’t enough by itself to continue the discomfort.

Yes. The ride vehicle has some motion.