So I travelled to Chicago for the Fourth weekend. Originally just supposed to be this 40 something mom and her teenage daughter but a surprise happened and a friend from junior high/high school joined with her two daughters (11 and 14). They got there before us having driven four hours from Warsaw, IN while we rudely slept till 9AM and got coffee at Phil’s which OMG is sooooo good. We arrived around 1130am to a long line of cars that kept us from parking for about 30 min. Then we got in a long line for the park that took another 20 min. 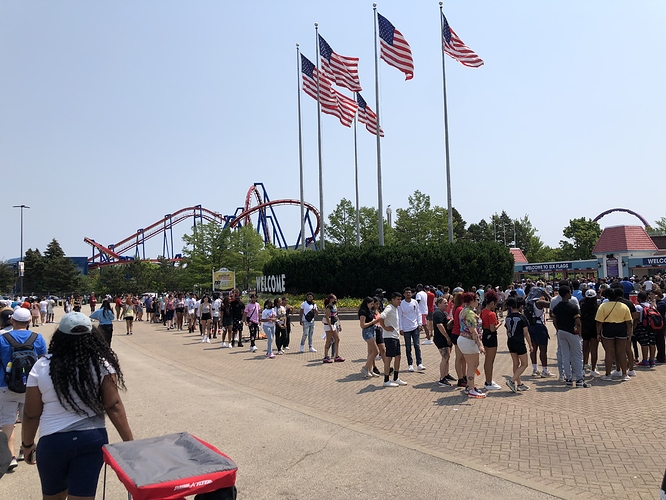 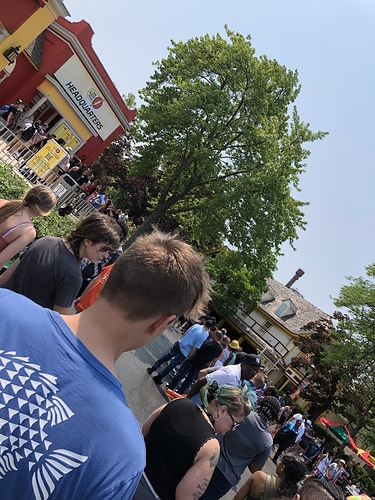 BDA39D85-DB0E-439A-AE76-9F20601627AE.jpeg3024×4032 4.48 MB
This park is packed with people for the holiday and we need this Flashpass and yet we’re gonna wait an hour for it. When lo and behold after about 10 min in line I realized there was a giant sign saying we could scan this QR code and use our Flashpasses on the app and woohoo we were happily off to meet our friends at Maxx Force. Thanks to @ryan1 and @Tall_Paul1 I knew this was not to be missed and I 100% agree. I didn’t black out or get sick. It was thrilling and smooth and I’d do it again but we only get one ride with flashpass for this. I get it. Asked DD are we going left or right which she replied left. We later learned this is the wrong choice as fireworks occur behind Maxx Force and to the right so they begin closing those rides early and we didn’t make them.

But no worries we did enough I promise! We rode Rue Le Dodge (bumper cars), Superman Ultimate Flight which was the only ride of the day that made me lightheaded, The Dark Knight Coaster, The Joker Free Fly Coaster right after our mobile order lunch at Johnny Rockets which is always edible (compared to the other food reviews I read online for this park I think it was a wise choice), winners circle go karts which believe it or not I’ve never done go karts before and they are 1000 times better than speedway/autopia, loggers run, goliath (my fave ride of the day), revolution, dare devil dive (our longest wait at 45 min), XFlight and Whizzer which reminded me of space mountain outside. We did a lot but have a lot we missed so always room for another trip.

With the exception of Superman, Dark Knight and Revolution and Whizzer everything was very smooth. I think the prolonged heat down south really messes with our coaster smoothness. Many of the Flashpass rides were closed, or closed to Flashpass but operating like Vertical Velocity (which i wasn’t waiting 70 min of standby for when I had paid $145pp for flashpass), or closed early like Justice League, Giant Drop and Raging Bull so we missed them.

The girls decided after Whizzer to miss the fireworks in order to beat the crowds so I was able to stop and pick up sandwiches in Chicago proper for dinner allowing us much better eats than Six Flags provides.

We had a wonderful time despite the crowds and even as packed as it was it was nowhere near as packed as Universal Studios has been my last two trips and walkways while filled with people were nothing like Disney crowded so it was very relaxing. I tried to stay hydrated and keep my blood sugar up with a couple of sodas mixed in as snacks and I never once blacked out on a coaster so I had a superb time actually enjoying the rides. My friend was pretty terrified of the roller coasters so she only rode a few and some how Maxx Force was one of them. Flashpass worked wonderfully for the rides we were able to do and our only real lines were the rides we paid for (go karts and dive (free fall/swing) which were both very affordable at $12pp and $15pp respectively. If you go when there are fireworks do the park counter clockwise since they close those rides for the fireworks. Flashpass is worth the investment as is the $26 all day photo pass. Here’s some shots from that. 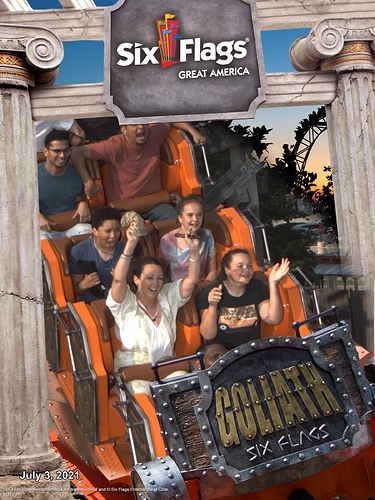 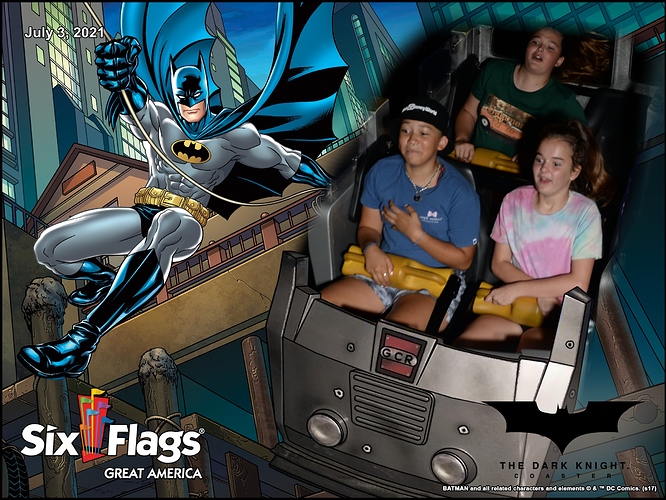 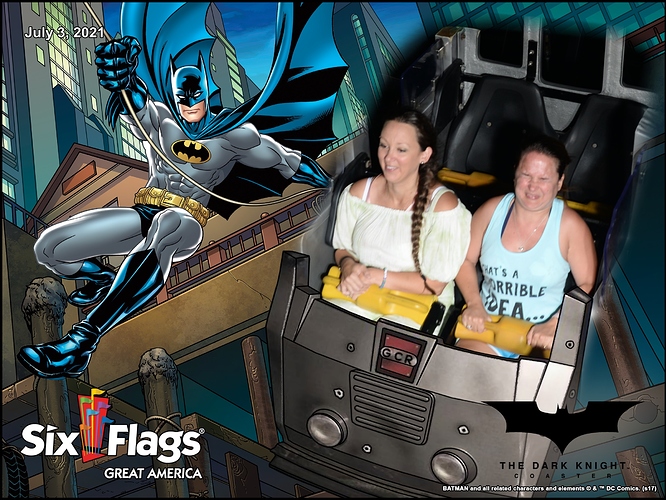 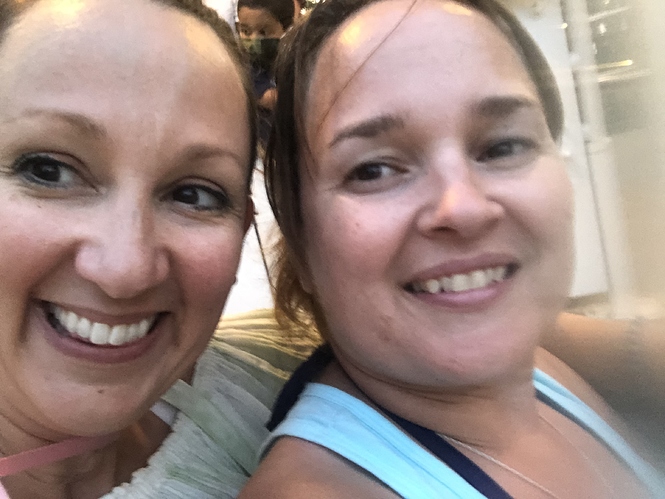 And my daughter and friends daughter on the log ride. 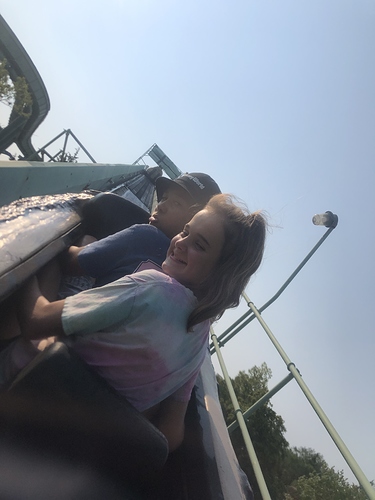 We stayed in Hyde Park and I loved the Sophy Boutique hotel. Very cool vibe and the hotel restaurant breakfast was extremely well priced. We all five ate well under $100 and was yummy. 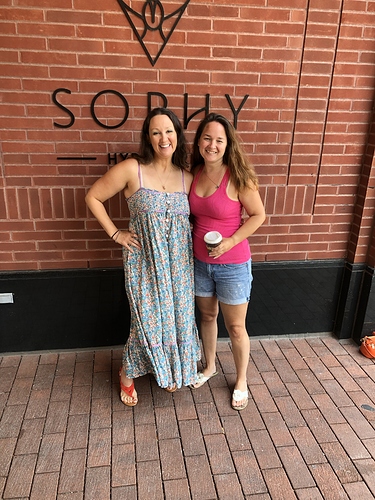 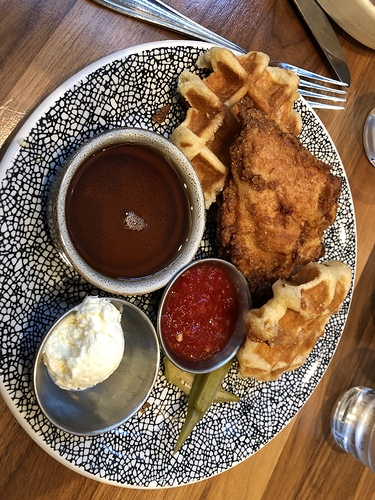 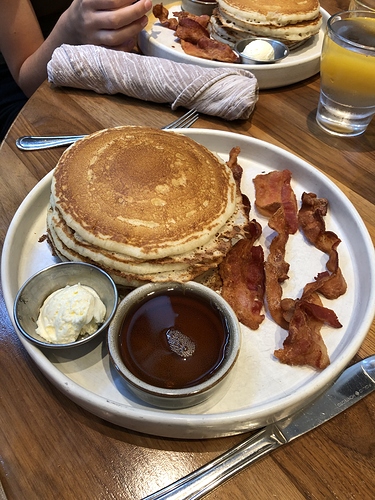 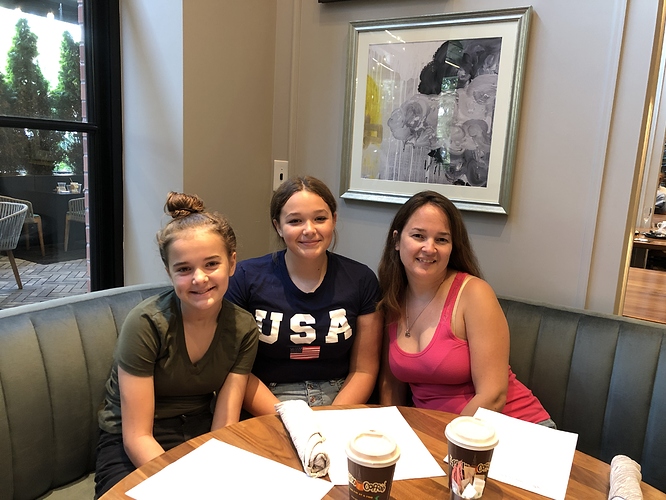 DD and I had some deep Dish pizza at Giordanos our first night. 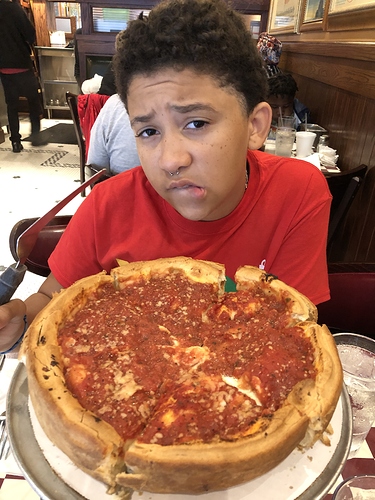 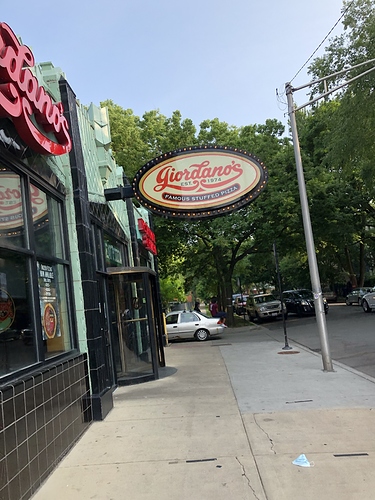 And we tried out the Tilt in 360 Chicago 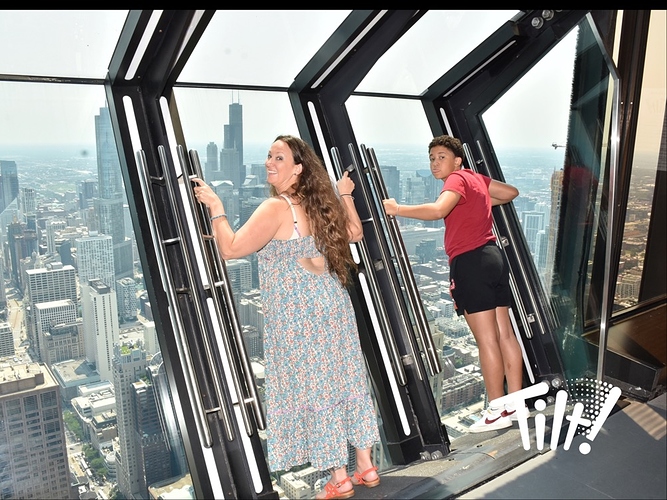 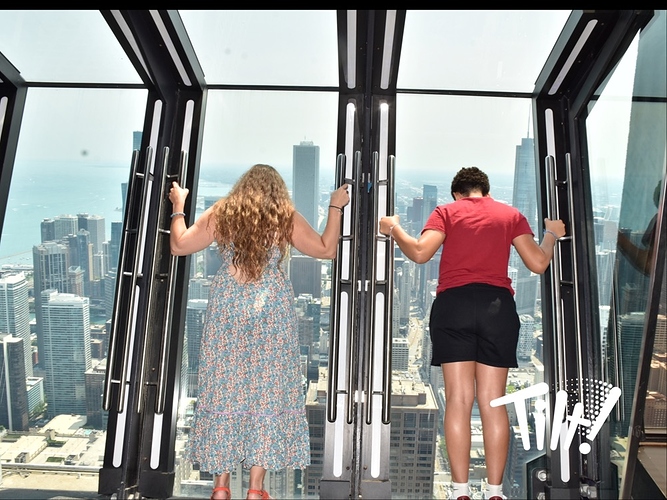 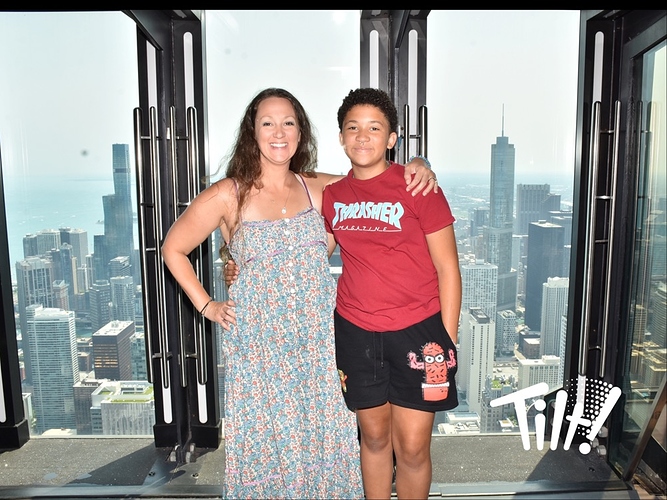 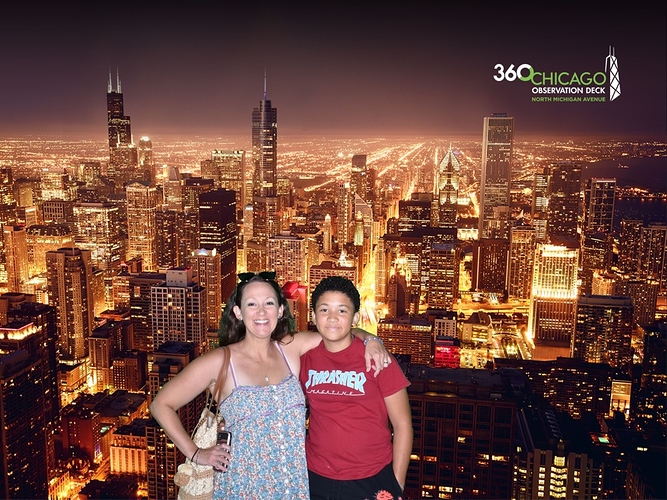 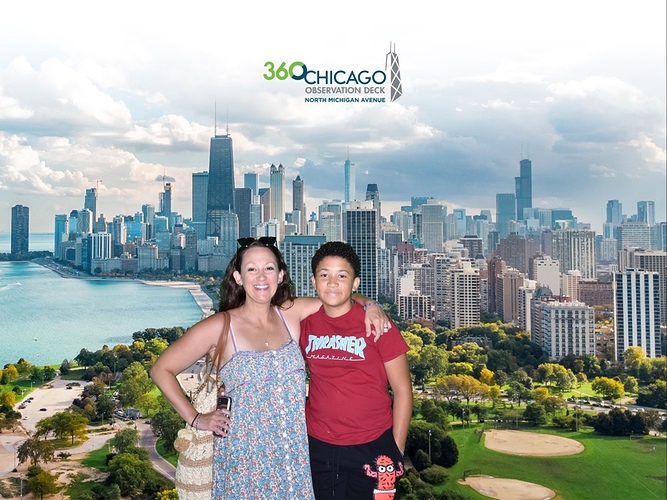 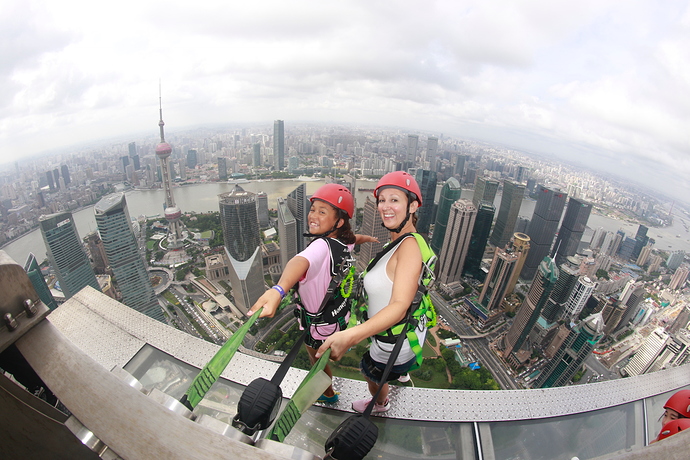 I was hyperventilating at arriving at 11.30!! Looks like you had a great time though!

Looks like you had lots of fun. Of course SFGA isn’t the best park in the world and is what it is, but it can still be plenty of fun. Enough good rides to make it worth it. And I know Chicago style pizza isn’t everyone’s thing, but I love it, and Giordano’s was a great choice.

It was a conscious decision to get there late and sleep in a bit. lol. I had told my friend 11:30am was my goal because the park was open till 10pm and then the fireworks and I just didn’t think I could go 12 hours straight. I probably could have though as I was in fine shape for the rides. Our local 2 Six Flags (Dallas and San Antonio) make me sick maybe because it’s hotter here so I just didn’t think I could do 12 hours.

I had a great time. I loved Six Flags as a kid and of course it’s nowhere near Disney quality. But it’s different too and more about the thrill so that’s fine. Goliath was hands down my favorite followed by Maxx Force so thank you for the recommendations.

The pizza was delicious. They kept apologizing for how long it took but I get it and it’s worth it. The sauce was my favorite part. I chose Giordano’s because it was literally around the corner from the hotel and walking > driving in Chicago (traffic is awful and where I was there was nowhere to park). But also our hotel checkin employee told us it was good and Yelp agreed.

Daughter is now addicted to Pot Belly sandwiches. She made me stop there twice and I saw her calling her second sandwich “hello beautiful” and taking a picture of it. Lol

Goliath was hands down

No, no. You did it wrong. You ride it HANDS UP!

I did almost lose my hat and glasses so I’m holding onto them very tightly and that’s why my arms went up in the first place “and they stay there”.