My sister and I are doing a short trip in September, with park days 9/13-9/15. My question is related to the DCA hours on Thursday 9/13, which are official now. 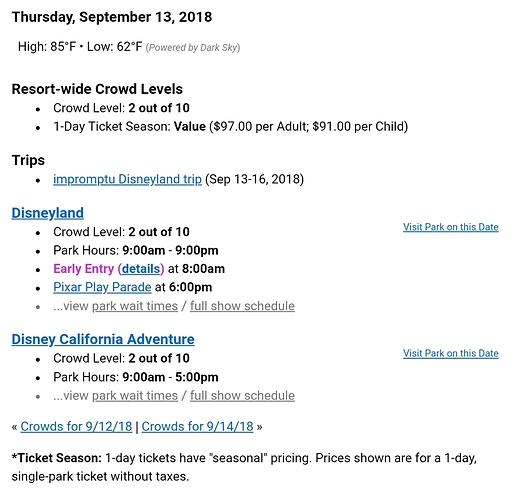 Why does DCA close at 5pm? It closes at 9pm on Wednesday, and 10pm on Friday. The Thursday before and the Thursday after both have closing times of 8pm. Why the early close on this one day? Touring Plans predicted it, too, so is it common for this one Thursday to have such short hours?

I know that when I have been in Sept, DCA has Occasionally closed early for a private event. Not sure if this is the case as well.

If I remember correctly, it’s a Cast Member appreciation event (I think for a certain tenure but I could be totally wrong there). But yes, once a year DCA does close at 5pm in mid-September for the same reason so that’s why TP was able to accurately predict it.

And of course, it’s the day we’re there. Good to know. Thanks!

You’re welcome! The reason they usually do it then is because crowds are lower so less impact to guests. Hopefully the crowds behave for you & then it won’t matter so much that you miss a few hours of reg DCA time. It would be great time to enjoy some atmosphere in DL while jumping from MP to MP.

That’s the plan! That’s why we have park hopper tickets and are gonna get the maxpass.