Hi everyone! We are having a great time at Universal. I’m resting in our room at Royal Pacific right now, and my family is swimming, so I thought I’d start writing this.

Cast of characters: me, my husband David, son Tommy is 12 and son Charlie is 9. We just moved from Albuquerque, NM to the Washington DC area for a temporary work thing, so we are going to be taking a few fun trips while we are living on the East coast.

We arrived at MCO at around 1 pm yesterday. I had researched the different transportation options for MCO to Universal, and had decided to just take a taxi. There was a guy waiting in the walkway leading to the taxis, and he asked us if we were looking for a car service. We told him where we were going. He said it would cost $55. That’s about what we expected to pay, so we hopped in his car. In hindsight, this sounds rather sketchy!

It turned out fine. He drove us right to Royal Pacific without any delay, and we paid what we expected. He gave us a business card and we were not murdered, so score one for the naive tourists.

The Royal Pacific lobby is gorgeous and the check in process was swift. Our room wasn’t ready yet, so we checked out bags with bell services, printed out Unlimited Express Passes (hotel perk) and headed out.

It was after 2 pm by this time, and we were starving. I listed off a few City Walk options and the boys chose Cowfish. Yummy! This was a great lunch. We spent about $130 including tip, which sounds expensive, but is right in line with my idea of “reasonable” for enough sushi to satisfy growing tween boys and their athletic father, plus a cocktail for mama. The All-American Double Bacon Cheeseburgooshi roll was our favorite. 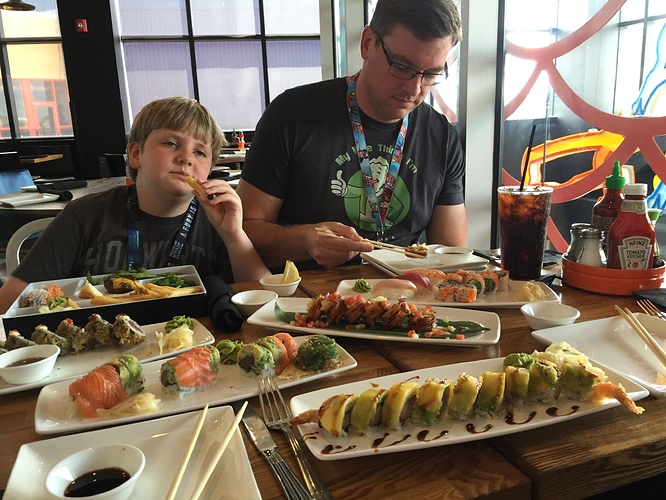 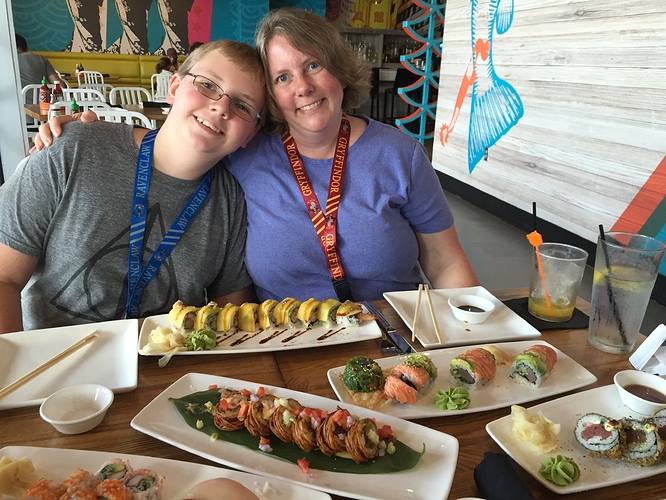 With bellies full-but-not-too-full of sushi, we sunscreened up and headed towards Diagon Alley in Universal Studios. I think I’ll stop here and continue later. I have dinner plans with @MooreDisneyPlease and @jkizjkiz at Tchoup Chop tonight, so I need to get ready for dinner. Stay tuned for more!

Love trip reports! I look forward to hearing about the rest of your stay! We just got back last week from Cabana Bay (loved).

I am adding Cowfish to my list for spring break, that sushi looks fantastic! Hope you have a wonderful time with Monica and Jayne!

Have a great time tonight - looking forward to reading more!

We really enjoyed Cowfish too.

In November, I got to Citiwalk. We landed up eating at Margaritaville and liked it. Fun eatery. I don’t think feeding two hollow legged boys is easy. Enjoy the rest of your trip.

More please! I need all the details. I think we’re almost more excited about Universal this year than we are the Disney part, except of course that so many of our friends will be with us at Disney.

On a side note we can’t wait to see you again Sally!

That was just a tease…hehehehe! Can’t wait for more!

We are resting in our room while it rains, so I have time to forge ahead here.

After our yummy late lunch at Cowfish, we were ready to enter the parks for the first time. We had park-to-park tickets, and Tommy was most excited about the Harry Potter stuff, so we decided to get a taste of both Harry Potter areas this first evening. We had about 4.5 hours, and this was plenty of time to see some of both areas.

We entered Universal Studios first, because we wanted to start with Diagon Alley, just like Harry did. Following typical theme-park logic, it’s way at the back of the park.

We saw Kreacher in the window and talked to the Night Bus driver and Dre Head first. Then we walked into Diagon Alley and we were just as amazed as everyone always is. It’s larger than I expected! 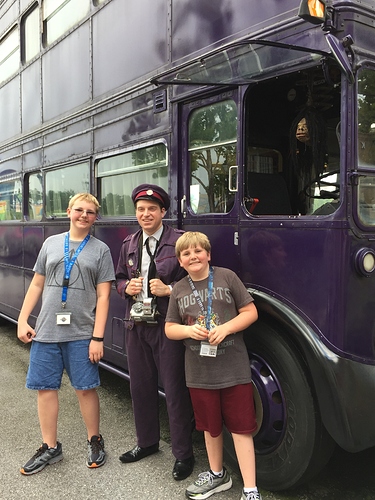 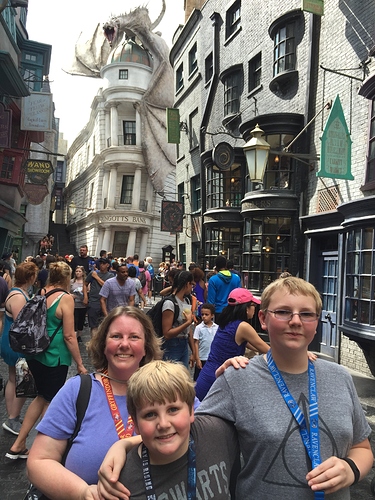 Our first stop was Ollivander’s for wands. We did the wand selection demonstration and Charlie was chosen! He’s not a huge Harry Potter fan like Tommy is, so this was the perfect thing to make him really excited about wands and spells and seeing things. (I don’t have very good photos of any of this because it was so dark inside Ollivander’s.)

By the time Charlie was presented with his wand, it was raining like crazy outside. This made the shop super crowded. Tommy knew exactly which wand he wanted, so we paid, ponchoed up and headed outside.

At this point, we lost the thread a bit. We New Mexicans still aren’t very good with rain. We did some of the interactive spell casting. We went into some shops, but they were all crazy crowded because of the rain. We got some ice cream at Florian Fortesque’s. We tried hanging out in Knockturn Alley, because it was covered, but everyone else had the same idea. We finally went into the Leaky Cauldron for some butterbeer, and managed to sit out the heaviest rain. It should have been a fun, immersive hour, but I think we need to try again sometime when it isn’t raining. I must admit we were all kind of cranky and uncomfortable. 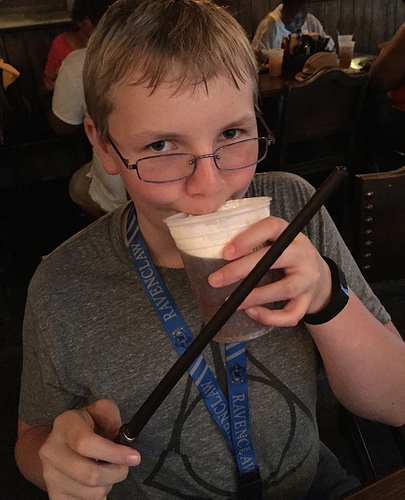 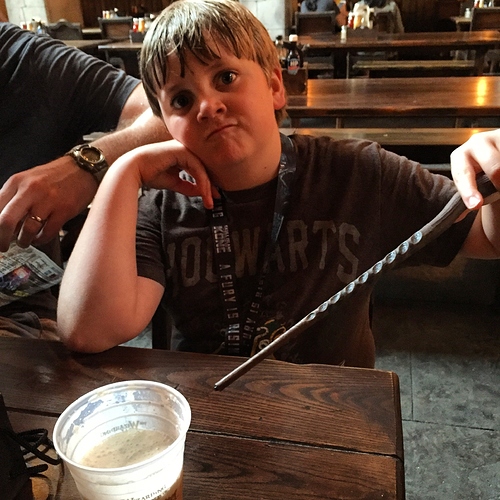 Charlie saved the day, I think. He suggested that we might as well do the Gringott’s ride since we were just sitting about waiting for it to stop raining. He said it was better to wait in line than to wait doing nothing. Wise 9-year-old! It only took us about 30 minutes, and that’s really not bad for late-afternoon. It was a fun ride, but not something any of us feel like repeating.

It was no longer raining when we were done with Gringott’s! 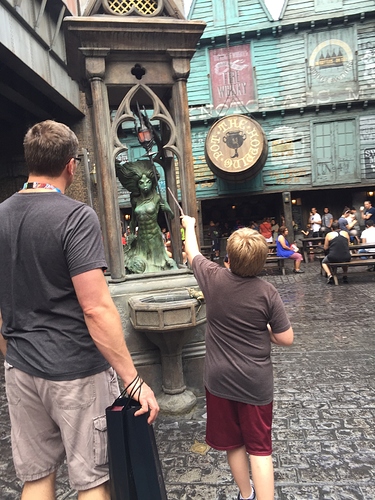 We headed over to King’s Cross Station to ride the Hogwart’s Express at around 6:45. It was excellent. The boys had their wands out the whole time. 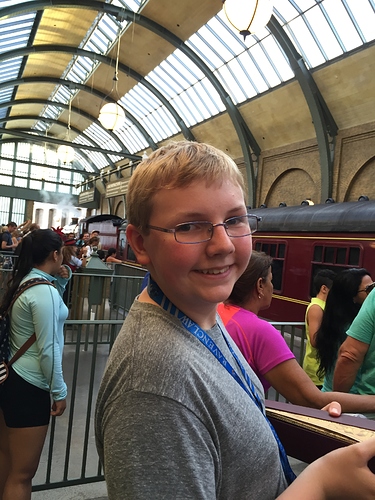 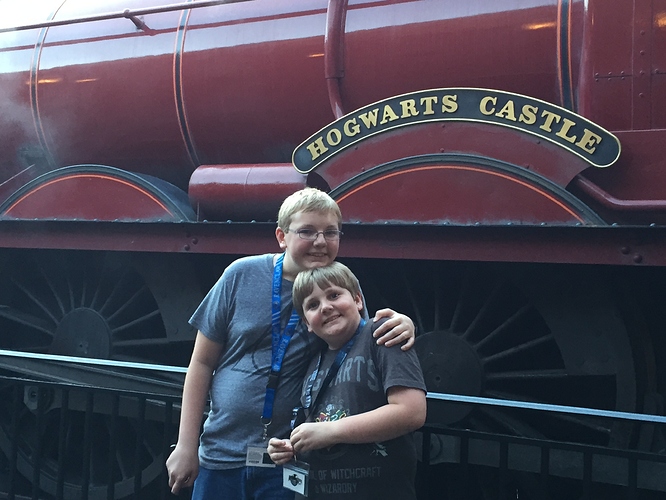 We had a little more than an hour in Hogsmeade before closing. This was such a fun hour! Tommy and David rode Dragon Challenge. They had almost no wait using Express Pass. Charlie decided at the last minute that he doesn’t want to do anything that goes upside-down, so I waited with him. We had some pumpkin juice, which is our absolute favorite of all the Harry Potter drinks.

We did Forbidden Journey and the walk through Hogwarts next. There was no wait at all! (This was at around 7:30. The boys and I loved it. We left David on a bench and went back through one more time before closing.

That had us exiting the park at the same time as everyone else. The walk back to the front of the park felt very long. Then we realized that lots of those people were waiting for water taxis, so we decided to walk back to the Royal Pacific. Bad idea! It’s not that far, but it feels like a Death March at the end of the day. We should have waited for the water taxis or done the rickshaws.

At least we slept well after all that walking. It was a great start to our trip.

and we were not murdered

Congrats on not getting murdered! LOL!!!

Girl, are you kidding me with all that sushi! I nearly leapt through my monitor!

We didn’t like the pumpkin juice at all. Butterbeer for me every time! What flavour icecream did you get?

I must admit we were all kind of cranky and uncomfortable

Ha! This is how I feel in Florida pretty much the whole trip. That humid, sticky, thick air just feels so wrong compared to Washington and pretty much all of the west! We also spent an evening in pouring rain trying to figure out what to do in Diagon Alley. We too went to Fortesque’s for ice cream!

I love seeing different people’s opinions of rides. When my sister and I went to Universal last year, she loved Gringotts so much that we went on it three or four times in the course of a two-and-a-half-day trip!

cannot wait to get to Universal and get our interactive wands!!

what exactly does the butterbeer taste like? I can’t decide if I am going to give it a go this time

It’s like cream soda with butterscotch flavour foam - more than foam really, it’s thick and creamy. It’s so good! Sweet though, it’s not to everyone’s taste. They do it frozen, which I think is less sweet (I haven’t had it) and I believe warm too, which I don’t fancy at all.

The icecream is good, but really just like vanilla with a butterscotch swirl. There’s also fudge, which I haven’t tried.

The frozen butterbeer is absolutely amazing! You must try it!