Running into a bit of a planning issue

As I gear up for my next trip in September (1-9), I am seriously concerned about my mom’s energy levels throughout the days. I really don’t want a repeat of a few of things that happened on my last trip.

To remedy this, I’m currently working with a strategy of having a huge break built into each day spanning several hours (5hrs). Basically what will happen is I drop her off at the hotel for a while as I go and keep myself entertained. The problem is this kinda splits the day into 3 “acts” for me and I fear as soon as I get started doing something, I’ll have to stop and then go back to the hotel.

But I can’t figure out a better solution.

I guess my question is: anyone have any suggestions? My fast pass window opens up on the 3rd and I don’t even have a solid idea of where I want to be on what day yet because of this.

Considering when you’re going, park attendance should be pretty light. (We’ve been the first week of September, and things were often walk-ons.) As such, I don’t know how much of a break you’ll need.

BUT, if I were you, rather than block off 5 hours, I’d plan several leisurely (air-conditioned) breaks instead. Lunch/dinner for example, and maybe some shows that allow sitting, etc. HOP, for example, COP, that kind of thing.

If your mom ends up particularly tired, go back to the hotel for a nap and then come back. Modify any FP you have accordingly.

I know it’s inconvenient, but my vote would be for a break in the middle of the day. That always works best for our family.

I don’t have personal experience, but have enjoyed reading this trip report that kind of does what you’re talking about.

Prologue: Before we begin, a few things of mention must happen. This trip was originally designed and planned to be in September, with celebrating my graduation from college and that’s pretty much it. However, as time went on, my mom Nancy, had endured some of the worst life can throw at you. At the risk of over sharing here’s the cliff notes: After surviving Breast Cancer and being cancer free since 2011, in 2016 my mom’s husband waited until she went to work one day and then left her with a …

What time does your mom normally get up? Mine is a new guy owl, so getting up early wouldn’t work. I’d probably plan on having her guys be me a call when she was ready to go. I guess what I’m saying is that like trying to stay within the schedule of small children (let them nap when they’d normally nap), that would probably be the best way to handle things with your mom.

*night owl. Not sure what a new guy owl is!

I am in a somewhat similar boat. Except it is not only my mom, but also my almost 3 year old. My mom also has a bum knee so breaks are necessary. What has worked well the past two trips is blocking out essentially blocking out 1pm to 4 or 5 in the afternoon as nap time/rest. Usually they nap and I hang around the hotel. This was annoying when we stayed at DAKL, but we are staying at Boardwalk for our trip in September and I am planning on just popping over to Epcot while they nap. Attached is a time layout of how I’m kind of planning our days. The hours before and after nap are a little flexible but the main plan should still work. 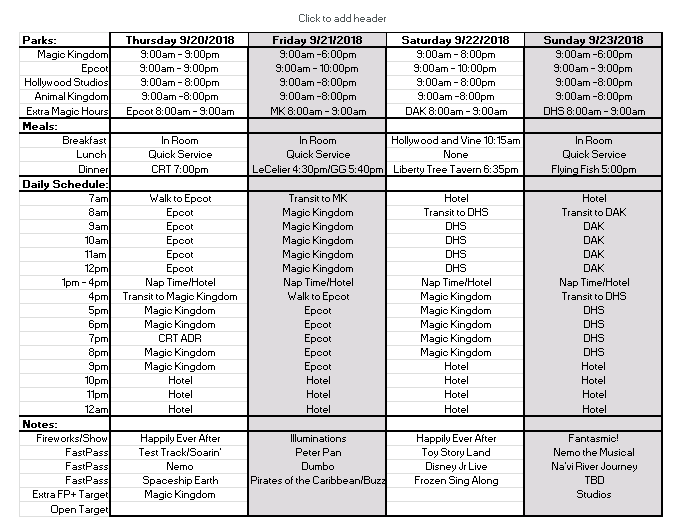 Unfortunately I can’t do that. As I said, she will need to sleep and it won’t be enough to just relax in the AC.

I don’t have personal experience, but have enjoyed reading this trip report that kind of does what you’re talking about.

heheh thanks, that’s actually my report from May. The strategy only somewhat worked and didn’t seem to allow enough time the longer into the week we ran. Which is why I was considering more of a break this time. Before I was only giving her 3-4 hours at most.

Mom usually gets up fairly early (I think) but has been known to sleep in considerably since the cancer set in.

Ha! You can tell how well I paid attention to names!

Unfortunately I can’t do that. As I said, she will need to sleep and it won’t be enough to just relax in the AC

Your trip report makes me wonder how to help my parents. They were originally planning a big trip with a tour group to Scotland, but decided they didn’t have enough energy for it. I can tell they are disappointed in this decision. My dad hates Disney, but I’ve been wondering where else we could go that’s so accessible. We went as a family once when I was in high school-I loved it, they tolerated it

That’s a tough one. The only thing I could suggest is still do Scotland, just not on a group tour? This way they can take it at their own speed. It might also open up some flexibility to visit other parts of Europe too if they end up not really enjoying it.

Have you talked to your mom about it?

My mom passed in 2014 (from an entirely different ailment) and she absolutely wasn’t interested in traveling.

Every person is so different. Is this a trip she really wants? Is she excited about it? What parts in particular?

If she has specific things she wants to see, i think I’d focus on those at her pace for a few hours less than she thinks she’ll be able to manage. I haven’t dealt with the affects of cancer treatment though.

I park hop and put a break in between almost every day. I do break my days up that way. I start with my nights, then plan mornings (never an early start before a late night) and about 4 hours in between. The traveling is an issue. With Uber/Lyft it is easier to do this. I do think cutting out some mornings (depending on the weather) may help. It is going to be brutally hot.

Is this a trip she really wants? Is she excited about it? What parts in particular?

Depends on the day you ask her.

She was wishywashy on going since we got back and only this week has decided that she definitely wants to go. (I was going regardless because it was a DVC Rental and there isn’t a refund).

As far as things she’s excited about or wants to see she will give no answer to that. She just says “all of it.” …yeah, real helpful, mom

The traveling is an issue. With Uber/Lyft it is easier to do this.

Anyone know how they handle wheelchairs? Mom’s ability to transition could be a major factor.

Anyone know how they handle wheelchairs? Mom’s ability to transition could be a major factor.

If you have a collapsable wheelchair, should fit in the trunk of the Lyft.

Another idea, can you bring a 3rd person along? Maybe someone who would tour with y’all in the morning and then take your mom back to the hotel so you can stay in the parks?

Not sure if this is feasible. But just throwing it out there.

I would recommend against a scooter, as it really makes getting around hard at WDW. I won’t use a scooter again unless we have too it was SO STRESSFUL!!!

Oh, that makes it SO MUCH harder. I’m sorry. My mom would just holler what she wanted.

I’d observe her to figure out how long she can keep going at a time. Likely, as someone else suggested she’ll need a long midday break. Maybe 3-4 hours in the morning. Nap during the day, then you can pick her up for another 3-4 hours in the evening.

I am a huge supporter of the mid-day break. Everyone here told me to do it, and i really feel like it made our trip go more smoothly. I think we packed in a lot from open to around 1, went back took naps/showers/watched tv in the ac, and went back for ADR around 6 each night. I never felt like I missed anything, probably because if I had overdone it I would have burned out and been miserable (and cranky, my poor husband)!

We always do exaltly what you are saying would best for your mother. We hit a park early in the morning, and quit right after lunch, go to the room and really sleep, get up and go to the park where are ADR is and then tour it. We sometimes try to get FPP for the second park after we have burned the ones for the morning park, or we do the less popular things after dinner. We are doing this by choice and it works well for us. We get out of the heat and we get refreshed and we are always ready to go again the next day under this system.