Hi all - we are looking at visiting MK and/or HS on the weekend of April 2-3. The TP Crowd calendar shows as being reasonable - levels 5 and 6. Yet we know their is a runDisney event that weekend and other websites seem to flag this as a challenge. Does anyone have any experience with these events or have thoughts on whether they’ll impact the crowds? I’m not sure how often the Crowd Calendar is updated so perhaps it is a function of it not being updated but I’d welcome any thoughts. Thanks in advance.

Historically the race weekends don’t tend to impact the parks in terms of crowd level too very much. Especially in the evenings when smart runners head to bed to prepare for that painfully early wakeup hour of 2am.

This race series may be different though as I know at least one of the events occurs at night. So you may see some impact there. The greater impact, however, will be getting around WDW in the hours leading up to, during, and immediately after the events. Plan extra time to get from place to place.

That is very helpful, thanks for taking the time to respond. Cheers.

If I’m ubering/lyfting from Dolphin to Universal on April 1 around 7:00 a.m., would that be affected, do you think?

Thanks for laying this out! I am thinking about a last minute trip and just realized it was a runDisney weekend and I still have PTSD from trying to RD MK during a marathon weekend.

Ugh, should I forget about rope-dropping Animal Kingdom on April 2? Early entry time is 7:00am!

That one will be tough.

Let’s look at the courses and see where that one goes. BRB

10K runs only around Epcot and the Epcot area resorts 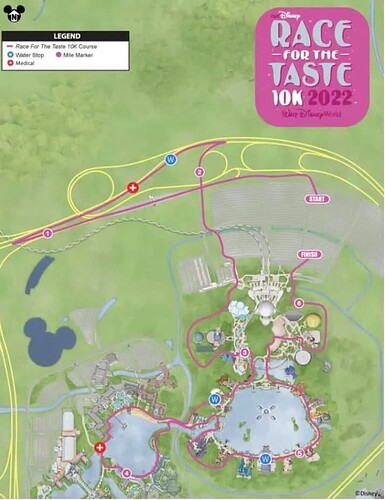 Where will you be staying/traveling from to AK?

Probably minimal effect then. They shouldn’t need to take Epcot Center drive which appears to be the only roadway affected on that day.

I’m not looking forward to that early wake up for the 10K. …we decided not to do AK as a first park for this trip (4 nights) …so I won’t have to do 7 am. Doubling up on DHS instead. Will hop over to AK one afternoon.

We are doing MK the day of the 10K. Going to be an interesting day…the last time I did Run Disney races was at at Disneyland. Where the time change was in my favour.