I had a great experience RD’ing Hollywood Studios a few weeks ago and have been meaning to do a quick report with pictures. There are many people there this morning asking questions, so I thought I should post this quickly. I should note, my family was rope dropping Toy Story Mania, but I will give tips about how you should do things differently if starting with Slinky Dog. I have no advice for starting with Tower of Terror.

My family got out the door a little later than we wanted to because we were waiting for bell service. I was at Boardwalk Villas, and saw the friendship boat at the dock around 8:10. We headed out the door over to the Swan and Dolphin and were able to catch the boat within a few minutes there.

The boat arrived at HS at 8:30. The line through security was not bad at all and we were at Rope Drop by 8:36.

Here we made our first good choice. If you kept straight on Hollywood Blvd, the line at the rope was about 40 people deep. 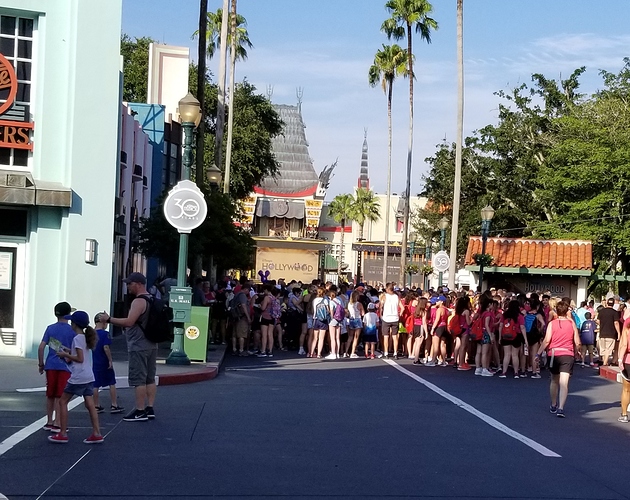 Instead we took a left at the fork at Keystone Clothiers where that family is standing so we were by Echo Lake. The line was maybe 10 people deep and more loosely packed. 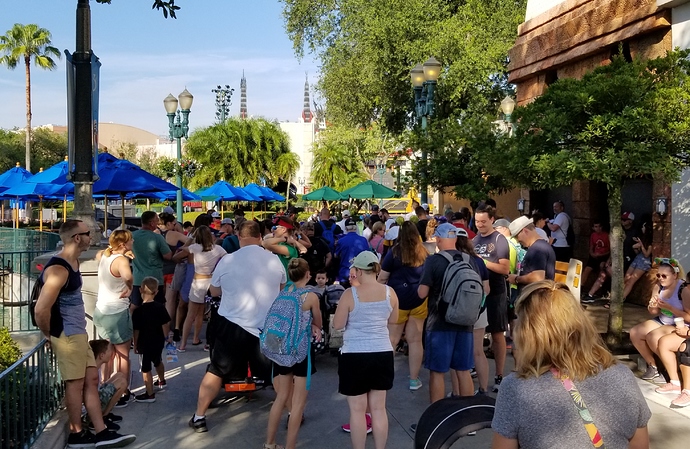 At 8:41 they started to walk us forward to be further up Hollywood Blvd. At this point, the cast members were lined up in a wall to our left. But they were way over to the left. We asked if we could fill in over that way, and they said, “yes”. Shockingly, this put us one family back, right at the rope. There was all this space, and nobody was standing in it. Meanwhile, to the right there were hundreds of people. Here are my attempts to capture this. 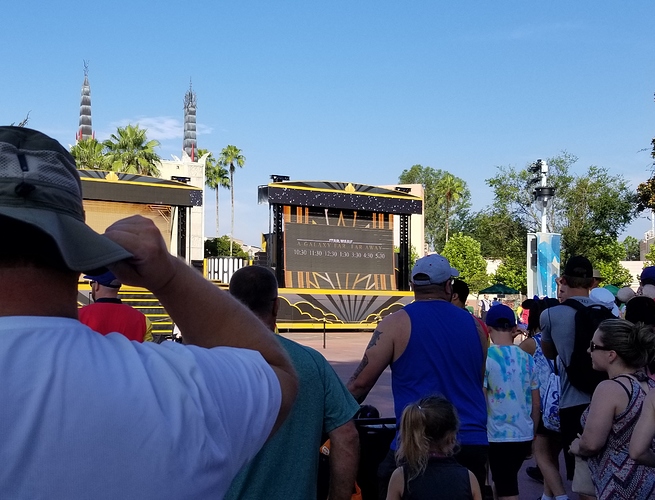 The next part is where I would have messed up, had we been Rope Dropping Slinky Dog Dash. When the Cast Members started walking us back to Toy Story Land around 8:45, I went through the wrong archway in Animation Courtyard. The rule of “left” no long applies here. You want to go through the center or the right archways. The left archway bogs down.

Here’s the walking path and what I mean:

Once through the arches, stay right if you are going to Slinky Dog, stay left if you are riding the other two rides.

Ultimately, we were off both Toy Story Mania and Alien Swirling Saucers by 9:15. So it was a great start to the morning.

All of this will change when Star Wars Galaxy’s Edge Opens up, but in the meantime I hope it is useful!

Very useful, thank you! We haven’t been since TSL opened so I have got no clue!

Great report! I am wondering what the CL was on this day. We RDed HS last week and the crowd was MUCH bigger by that time. Though I will say there were multiple very large tour groups so perhaps without them it would have been more like your pictures. I think all your really detailed and helpful tips still apply no matter the crowd size. Also, for those wondering about signing up for Jedi, we were able to go sign up once in the park but pre-RD and still get back to the RD holding area and be in the front part of the pack. And see that sunny patch on the street? If you do line up on Hollywood Blvd., try not to end up in that spot of the waiting crowd. There is shade just in front of it and clearly just behind it and it makes a significant difference in your comfort during the wait. The group that had been standing in that sunny spot cheered with relief when we got moving a little and they reached the shade just a few feet in front of them.

Great question! It was a 6 that day, which felt about right. Was a predicted 3. That clearly makes a difference. Note, I do NOT recommend rolling up at 8:30 if you want to ride SDD!

Interesting. Ours was a similar CL so it must have been those large tour groups making the crowd that much bigger or our day just had earlier arrivers. But by that time you arrived, Hollywood Blvd. was backed up way past the point in your picture on our day.

Our crowd definately felt like it built later in the day. By the time we got to TOT and RNR at 9:45 it was hopping.

I like the play by play, thanks for posting. I maybe doing this before my Star Wars Preview time…but not sure if it will still work with the first session of AP preview people lined up too.

This was so awesomely helpful!

You had it easy! Last fall we arrived at park at 8:10 or so and were still further back from where you were on hollywood!

Seems like the morning started off as a CL3 and then got way busier! Epcot had EMH that morning so maybe people started at Epcot and came.over later.

Great thread, thank you for sharing! I won’t even be there until well after GE opening, but felt this was very helpful in trying to sidestep the masses on Hollywood blvd. Wondering if the rule of left makes a comeback with GE?

Probably not as a hard left at that intersection (before Echo Lake) takes you to SWGE. Unless people enter through TSL which seems like a recipe for disaster. If people do go through TSL, then I think this would still work.

Overall I think the key is to look around to see if there is a way to zig when others are zagging!

Where is the entry to GE at (right by Muppet Vision)?

If it is, I see what you are saying and it will be good for RD flow as they will have created 3 main RD groups: RNRC &TT / TS Land / SWGE and all will be going ready to rock in a different direction.

There are two “entrances” to GE, one is near Muppet Vision and the other is at the back of Toy Story Land. I put “entrances” in quotes because it is widely assumed that one will be an entrance and the other an exit for a long while. At DLR there are 3 - I believe 2 are used as entrances and one as an exit, as of now.

No way RD could handle all that volume going to SWGE and TSL. Those streets by animation courtyard are very narrow! But I am not the decision maker!

Great play by play. For those doing it, one thing that struck me was that the CMs hold a very tight slow moving line. Makes it tricky to move - very different than doing Pandora RD. Just a heads up because if you are at the front, prepare to be a bit squished and pushed around.

@MrsWeb On a crowded day, what time did you arrive at HS (tapstiles) in order to sign up for Jedi training AND still get a good spot for RD? Also, were you able to get onto SDD pretty quickly?

We were heading to TSMM not SDD because we had a FP for later. We got there about 50 mins before park open but didn’t need to get there that early with what we planned to do. Transportation took less time than anticipated. Someone who RDed SDD could better tell you what time you need to get there for that.

But it sounds like if you get there early enough, you can sign up for Jedi before getting in the Rope Drop line?

Thank you very much for posting with the pics and your maps.

Yes, we did without problem. But because we weren’t aiming for SDD we didn’t care nearly as much about our RD position.