Riding the Skyliner for Fun

I know I have seen a lot of info about riding the Skyliner but I cannot keep it all straight in my head, and some of the posts with this info are pre-Covid so probably outdated.

We are staying at Wyndham Bonnet Creek and for our HS day will probably take an Uber/Lyft to the Swan and walk to HS in order to be very early for RD. Hopefully we’ll ride MMRR and maybe SDD or MF, get a BG, and be able to relax about the day.

We’d like to ride the Skyliner for fun at some point in the afternoon. Or, alternately, we could take it out of the park at park close and then take an Uber/Lyft home from wherever it drops us off. What would you suggest? Where does it go directly from HS? I know it hits a lot of different resorts, goes to Epcot, etc., but you have to change in order to get where you’re going, so I’m just really not sure of the best plan of action.

I know my girls would enjoy the ride and it would get us out of HS during the busy afternoon. I know it doesn’t run if it’s raining (right?). What else do I need to know about riding it for fun?

This article has good information about the Skyliner. 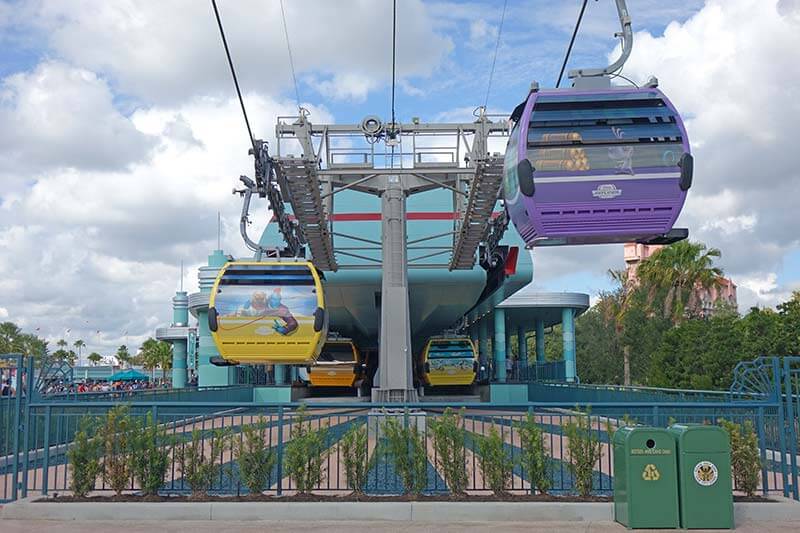 Our Expert Guide to the Disney Skyliner Transportation System at Walt Disney...

Where does it go directly from HS?

The first stop is CBR. 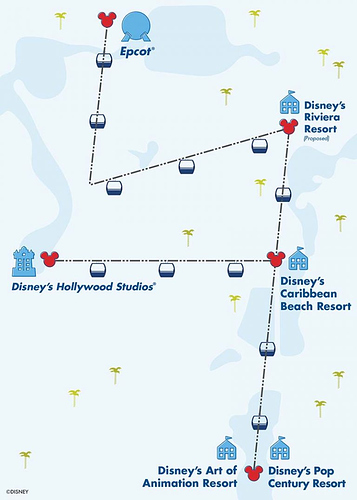 The Riviera station is the only station that you do not have to get off at, unless it’s your intended stop. Caribbean Beach Resort guests can also hop on at the Riviera Resort station if they’re closer to it (for example, staying at a room in Aruba) and would like to go directly to EPCOT.

So once you get to CBR, you will have to get off the gondola and either grab an Uber from there, or transfer to another gondola if you want to go somewhere else along the Skyliner route.

We enjoyed talking the skyliner to AOA. We got off and toured all the themed sections. You can also tour Pop. We started from Epcot and transferred.

We rode the Skyliner on our trip in August “just for fun.” It was our last park day at HS. We rode to CBR, then transferred to the other line and rode to Epcot. Then got right back on and did the reverse route. It’s very relaxing. And since you’re alone in the gondola, you can take masks off. It does take a little while, though.

On our 2nd DHS day we took the Skyliner to Boardwalk Bakery for lunch. It was a great break in the day.

That’s a great map and article, thank you!

Sounds like I’m not the only one who thinks this sounds fun! How long would you say it takes to go all the way to Epcot, @Julianne_fki @meekomist is Boardwalk Bakery at the Epcot stop? I just have us bringing food for our HS day because most of the options there don’t really appeal to us (except maybe a couple of the Halloween treats), so going somewhere else for either lunch or a snack would be great.

is Boardwalk Bakery at the Epcot stop?

Well, the Boardwalk is closer to the Epcot Skyliner station, walking distance, than walking from HS. It probably isn’t faster, though. It would likely be faster to walk from HS directly to the Boardwalk. This is because if you get on the Skyliner at HS, you take a short stint to the CBR station, and then you have to disembark and board the Skyliner from CBR to Epcot, which is a much longer route, due in part to the extra turn, plus the Riviera station.

It is an estimated 16-20 minutes to walk from HS to the Boardwalk.

So, basically, taking the Skyliner from HS to get to the Boardwalk will probably take you an extra 10 minutes, more or less (not including additional wait times if there are lines at the station or if they Skyliner has to stop temporarily). But, on the other hand, you get to experience the Skyliner this way.

I’m pretty sure we’ll start our day walking right by the Boardwalk if we get dropped off at the Swan and walk to HS, right? Maybe it would be silly to take the Skyliner back there for lunch. Maybe there’s something at CBR? Ugh, I dunno. I kind of just want to wait and see if we get to ride MMRR and get a BG before I even make plans for the rest of the day. If all else fails I think we can ride the Skyliner to CBR at park close and get an Uber home from there. It’s so close that it’s too bad there are hedges and no sidewalks to get to WBC from CBR!

walking right by the Boardwalk if we get dropped off at the Swan and walk to HS, right?

You’re pretty close. It isn’t very far out of your way to head over to Boardwalk. I suppose the question is why you would want to. Do you plan to eat breakfast at the Bakery or something? Not much open on the Boardwalk at the moment.

No, we wouldn’t go there that early. More like looking for someplace to possibly eat or get a snack or relax after taking the Skyliner for a break in the middle of the day.

Maybe you could do a character meal at Topolino’s at Riviera?

I don’t remember how long it took us, but probably the better part of an hour. We had finished up our (3rd!) day at HS and had no pressure to get anywhere. If you want something faster, you could just ride to CBR and back.

I wish. Too expensive for a reduced experience this trip!

I’m pretty sure we’ll start our day walking right by the Boardwalk if we get dropped off at the Swan and walk to HS, right?

Maybe it would be silly to take the Skyliner back there for lunch. Maybe there’s something at CBR?

Maybe you could take the Skyliner to Riviera and eat their quick service (Primo Piatto) for lunch. It is really good and easy to get to. Just place your mobile order when you are on your way in the Skyliner.