Reserving a meal for more people than necessary

At a table service restaurant, if I reserve for a certain number of people, do I have to specify who will be eating? I’m doing a solo trip. Can I make a reservation for 2 or 5 people and then just ask people I meet in the parks if they want to join me for a meal? And then what happens if I arrive solo for the meal?

You only need to give your name plus the no. of guests.

No penalty unless noone shows up.

Can I make a reservation for 2 or 5 people and then just ask people I meet in the parks if they want to join me for a meal?

What a fun idea!

I often will make reservations for an extra person or two. There is no penalty to show up with less but can be impossible to get seated with extra unreserved guests.

I mean, they have to pay for their meal.

You aren’t penalized by WDW. However, you took away a full table from a family of 4 that wanted the same ADR time for the last 6 months. I get it if you definitely have a party of 5 - 6, but someone decides not to go. That’s still the same table size. If you requested 5 and you show up solo just because you “hope” someone will go with you that’s a real pain to the restaurant and your server. (Who had a table with a potential 5 person gratuity who is now making a third, maybe less, of that amount from a large table with only 1 guest.)

Hopefully, they’ll ask you to wait until a smaller - two top - table is available. It’s still a pain to the hosts and staff to have to shuffle you around.

Please don’t take this personally. I’m sure your intent was pure and wanted to make a new friend. However, do this at a QS or lounge over drinks - not a TS. I see too many posts from people who can’t get their group into a place because it is full.

They have always sat me at the table for our party. It also allows a walk up to get a table if it frees up a table. There are advantages both ways.

You can also modify the reservation down. I have done that in the past - I find an ADR for a larger size party and modify down to my size immediately.

And as a solo, there are some places (giving ‘Ohana a super strong side-eye) that will never show for only 1 (sometimes for any odd number). Disney is aware of this glitch - but since it is only a handful of restaurants they have not fixed it for years but instead have actually advised searching for 2 if solo. ‘Ohana is the only one I will not modify down because the system will not “find” an ADR for 1. (To clarify, if I were to find it for 4 I would modify it to 2.) But there are no 1-tops there or really anywhere other than the counter at Beaches & Cream assuming it stays in the refurb, so unless you think solo travelers and odd-numbered parties should only eat QS (where we would still be at a minimum 2-top, parties of 3 at a minimum 4-top, etc.) there will be some tables with an empty seat.

I knew when I wrote my opinion it wasn’t going to be popular.

Sure, they’ll probably ask you to wait while they shuffle tables around. However, that family that has been trying to book that table for 4 over the last six months is out of luck unless they walk up and are willing to wait because a solo traveler overbooked.

I’ve worked the other side of the counter at theme parks. It’s not fair to people who want to play by the rules. (But hey… I also dislike when people try to claim a whole section of fireworks viewing for a large group that isn’t actually there.) Maybe I’m just uptight.

Of course not… But OP is wanting to book for a “possible” 5 people not 2 people. I get the need to book for 2 at select locations just to get a table. And of course you can modify a large group down to a smaller number in advance. However, OP wants to wait until the same day to do so. Which, IMHO, is unfair to a family that has been trying to get that table for months.

Again… I know I’m probably going to get hate for this opinion. It’s not personal. I just take only what I need, so I don’t take away from anyone else.

So maybe I shouldn’t overbook. My idea is to give a magical moment to people who would get a booking with me on the spot and I would have their company at my table. But maybe it’s kinder to just leave the spots open for other guests to book.

Why not invite them to a lounge or to a place in Epcot WS for drinks?

More people are apt to join you for a casual drink than a TS. I travel solo and have made many “one-night” friends at pubs.

I’m more the type to enjoy sitting with a solo traveler or a family with kids at a character meal.

Unlike most places, many Disney restaurant last are not full, even when there are no ADRs available. They do limit but people report it is a customer to server ratio- not table? Did you serve at Disney? Is this new? I often travel in February at the same time my 85 year old dad and his wife take their yearly trip. I never know when he can make it. Everyone does what they have to do.

Everyone does what they have to do.

I totally get that. I’m not saying don’t overbook for +1 or even +2. However, OP wants to overbook +4 and not cancel until late the same day. There’s a difference in booking for someone who is definitely in your party who might not make it versus booking for the “chance” a random stranger will join you.

Did you serve at Disney?

No. I have not worked for Disney. It is my dream job. I’ve worked at WB MovieWorld - the largest theme park in Australia and for Six Flags (In many positions - I worked Ops / Entertainment / Group Sales / Dinning and finally at a Corporate level doing Marketing & Corporate Sponsorship)

This was my career from high school , college and after until the economy collapsed in 2007. I had to choose to try to stay in the industry, move my family across the country and struggle in an industry that was laying people off everyday or get an office job that was stable. It’s still one of the hardest choices I’ve made in my life, but I put my family first and took the office job.

Just in case you need evidence that I’m not misrepresenting myself on the internet - I know people do that. 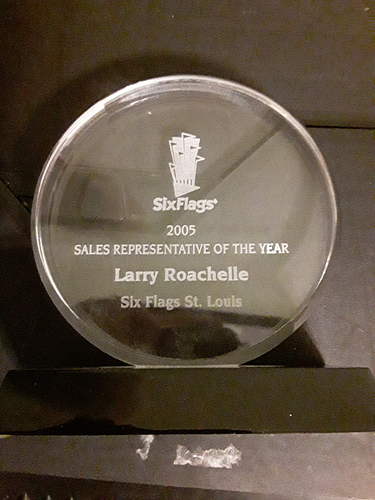 Also, I can go through some of my scrapbooks and dig out pics of me in costume / uniform working in the parks if desired. The award was easiest since it’s on my desk ATM

My DD is going off to University next year and I have told my DW that I’d like to retire to Orlando and do any job at WDW or Universal. She hasn’t said no!!

I hope your dream comes true!

Me too! Her company’s US headquarters is based in Tampa so she could transfer there!!

Honestly, as a solo traveler, I might be keen to join another solo traveler I met in line for dinner. As a mother, I think it would creep me out if a stranger in line asked us to join them for dinner.

So maybe I shouldn’t overbook. My idea is to give a magical moment to people who would get a booking with me on the spot and I would have their company at my table. But maybe it’s kinder to just leave the spots open for other guests to book.

I don’t see anything wrong with your initial plan. I don’t mean to pick on @darmite2 … I get his point, I just disagree with his conclusion on this one.

I travel solo and have made many “one-night” friends at pubs.

I do not think this means what you think it means.