Any BBQ experts on here who have tried the sauces at Regal Eagle Smokehouse?
The only BBQ I have enjoyed was in Alabama which was vinegar-based. Is the North Carolina sauce similar to this?
There is also Smokehouse, Mustard and “Savory spice”. Any comments would be appreciated!

North Carolina sauce similar to this?

Having lived in NC and been appalled at what they consider BBQ (raised in Texas and living there again)…it is not what you’re thinking of. NC is JUST vinegar…nothing else. I believe South Carolina is a vinegar based sauce. Now I’m not sure if Epcot’s version is authentic but if it is then NC should be plain vinegar pork

Yeah, no. NC sauce is NOT just vinegar. It is mostly cider vinegar, a touch of brown sugar, a kiss of tomato( we usually use paste- just a touch/barely any), and spices. The NC style at regal eagle is about accurate with a bit more tomato added than I’m used to. I can’t eat TX bbq sauce, as I find it too sickly sweet

Interesting! It says the Texas sauce is “mop sauce”. Is that the sweet one?

“mop sauce” is usually a vinegar based one a la NC/SC. I didn’t know that they used that phrasing for Texas sauces🤔.

The one I had in Raleigh area was literally just vinegar…none of that brown sugar, tomato, etc. I literally spat it out and threw the whole sandwich away. I was told that this was the way of NC and what you describe is SC according to my Cary, NC coworkers.

I don’t really use BBQ sauce in Texas. We make our meat so good from the rub/cooking process alone it doesn’t need sauce. Sauce is for bad BBQ. If you ask Franklin for sauce on his brisket, he’s gonna be offended LOL I don’t know that for sure…I am just talking out my butt!

But I can tell you DH who smokes a lot of meat would be offended.

This is a typical Texas BBQ sauce: 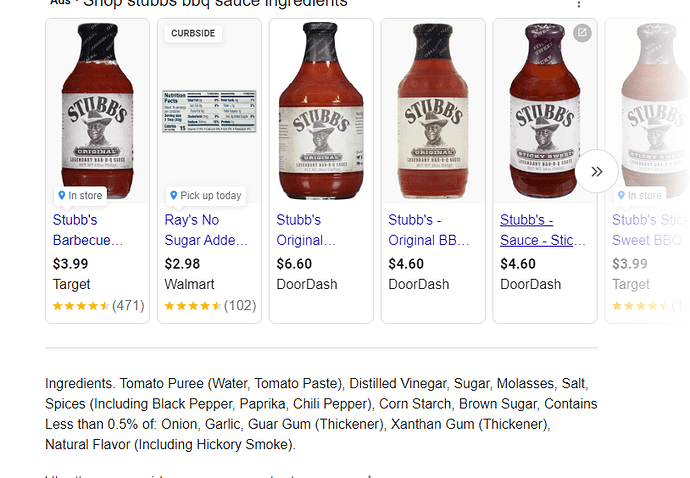 I’d describe it as a sweet (with molasses instead of sugar) and spicy (black peppercorn/chili pepper) ketchup.

I googled NC BBQ and there are apparently two types:
North Carolina has two styles of barbecue: Eastern and Lexington. Eastern, found from the coast to the Piedmont, cooks whole hogs over oak coals, and then seasons the meat with a thin, tangy vinegar and pepper sauce. Lexington Style, found from the Piedmont to the mountains, cooks shoulders over hickory coals and uses a thicker, sweeter sauce on the finished product.

That’s so weird, as I was born and raised here in the mountains and have never had thick/ sweet sauce. Always the vinegar with the few extras thrown in, pepper, and maybe hot sauce. We even go to the Lexington bbq festival every year in October, and the sauce there is the vinegar that I described above, not thick/sweet. I don’t know what they had going on in Raleigh, but that sounds gross! Texas does more of the beef, right? That would probably be better with the molasses/ketchup kind of sauce and the vinegar tastes better on pork. That makes sense to me.

But this is my favorite brisket in the world and it’s literally just brisket, salt and pepper and is so flavorful and melts in your mouth and needs ZERO sauce:

Use a Simple BBQ Brisket Rub

The key here is to forget complicated spices or herbs, and simply go with a simple salt and pepper blend.

Aaraon Franklin’s recipe is all about simplicity. Our BBQ rub here is the perfect example of that.

Using just this simple seasoning will do enough to dry brine the beef a little, and impart just a touch of flavor. We don’t need to do anything more than that.

Use equal parts Kosher salt to black pepper (usually half a cup of each is enough) and mix together. Apply all over the brisket, but don’t be too generous.

Once you have applied the rub, leave the brisket for an hour at room temperature. This will allow the brisket temperature to come up slightly, while also allowing the salt to do its work and stimulate the moisture in the meat.

*This is Franklin’s recipe.

Great info and really fascinating. I guess I will have to try one or more of the sauces and report back.

This was my review of Regal Eagle from my Solo Trip report in March, FYI.

I Take Orders from Just One Person ... ME! A Solo Trip Report Trip Reports

It’s a brisket sandwich on Texas toast. It was pretty good. The bbq sauce here was not the best (super important for good bbq), but it was serviceable. The mac and cheese, onion rings, and berry punch were all good.

If I recall correctly, the sauce was better than like, Kraft BBQ sauce, but not as good as an authentic BBQ spot. I think everything was a little too salty. Overall it was good though - much better than 90% of QS restaurants in WDW. I’d go for this over a boring burger, sad flatbread, or microwave chicken fingers any day.

I tried a couple of the sauces - I believe Brisket Sauce and Sizzlin’ Pit. I usually go for a sweet BBQ sauce. If nothing else, it’s fun to try the different ones. 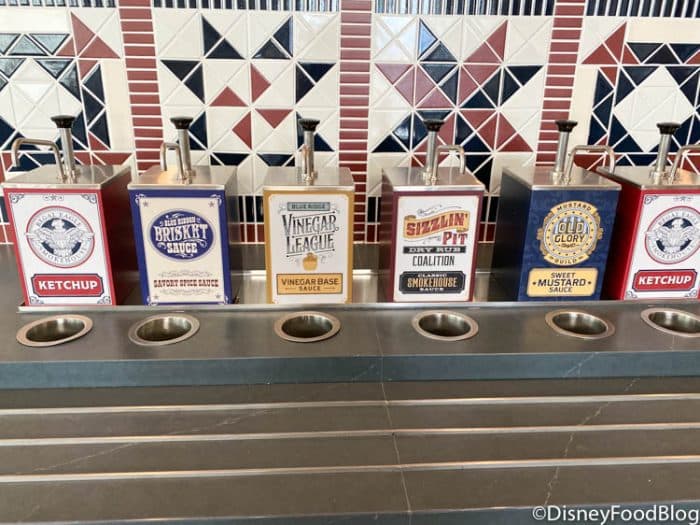 The post below has some pictures of my food.

I Take Orders from Just One Person ... ME! A Solo Trip Report Trip Reports

I am going to try to check it out. All the different sauce names and descriptions are very chaotic.

I’m guessing Arizona is also a beef bbq state? I think if cows out west more than piggies.

I don’t know that I’m qualified to answer, but I think beef is probably a bit more common. But there is plenty of pulled pork too. I rarely see sausage at bbq in AZ though.

so good from the rub/cooking process alone it doesn’t need sauce. Sauce is for bad BBQ.

That is exactly what my husband says…and you don’t need anything like A1 if steak is cooked correctly. (He/they are right too.

A1 if steak is cooked correctly.

Yeah, A1 on a steak is a cardinal sin! Steak should stand on its own.

I’ve had really good bbq meat that doesn’t need sauce, but for some reason I do prefer sauce with bbq even if the meat is moist and well seasoned.