I knew this was happening on my trip, and I knew that it was the day after my planned MK (Saturday) day, but for some reason it didn’t occur to me until it came up in the Liner meet discussion that woah, the waits are going to go up that weekend. It’s also supposed to be 79° that day.

How bad do we think it might be? As of now, before any adjustments, I was planning that to be my second LL choice… hopefully I can get a Jungle Cruise right around 9:15 or 9:30, then Splash around 10:15. If I reversed that I’d be looking at a late Jungle Cruise around 5:45, then which wouldn’t alter my plans for the day too horribly but I’m not a huge fan of Jungle Cruise in the dark.

I think it really comes down to how much you would regret not riding Splash again in its current form. If you would be gutted, I would pick that first. If it’s a shame but not a disaster, you can balance it out with how much you don’t like JC in the dark.

Have they announced the date for DLR yet?

It’s really unpredictable just how long the line will get. Nothing like this has ever happened.

I could be way off either direction.

So what you’re saying is either direction of my plan (where it’s my first or second LL) should be fine.

I’m not leaving it to no LL like TP thinks I should, and I had already opted to wait in the longer standby line for BTMRR because it’s a slightly more interesting (and less stinky) queue.

I hope that’s right! Very high volatility day for sure.

I would go for Splash first to be honest if it’s important to you.

I can also see G+ being very popular that day. They might bump up the price too, if you can I would buy it at midnight.

hehe wait in the 2+ hour line. RRRRRREALLY take in that queue for the last time

Wish the song would be kept. Man that first go with the eruption of zip a dee doo dah from the ferry boat? That was so great. I’m not sure “Dig a Little Deeper” is gonna be able to compete

It has happened in DLR when ToT became Guardian and the roller coaster became IncrediCoaster. IT WAS BAD. HOURS of wait for people to ride it one last time.

That’s a good example! Hadn’t thought of that. If anything this will be worse. Potentially a lot worse.

I am willing A LOT worst. But the rest of the parks were great that day.

At DLR though several AP came for the day just to ride it one last time.

But the rest of the parks were great that day

I hadn’t thought about rebound effects on other parks, or other rides within MK… I’m wondering if maybe we should RD MK to get on Splash via LL early (anticipating that Splash-focused crowds will head to Splash early, so maybe crowds will be lower at other things early in the day), then hop to HS for the rest of the day and finish MK on the 24th after AK.

The others in the group were prepared to pay $25+ for G+ anyway, so that’s not such a huge deal.

Check out these Splash ride photos.

r/WaltDisneyWorld - Each time we went to Disney, my brother and I got a funny... 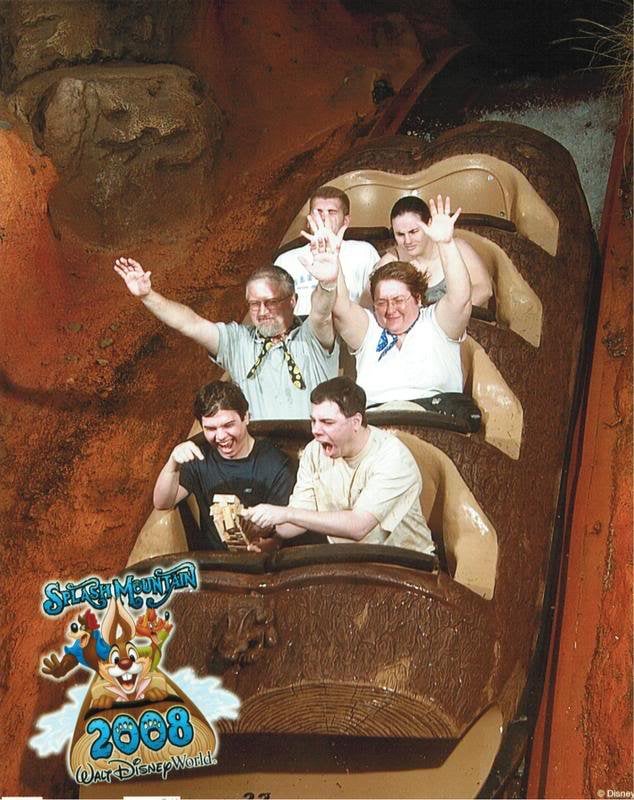 Here are his other (even better) pics.

I was pretty much spot on with my prediction for Saturday 1/21/23: 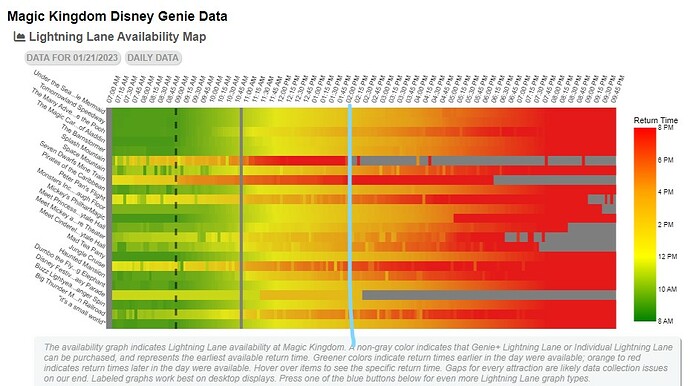 And here’s how the crazy last operating day of Sunday went: 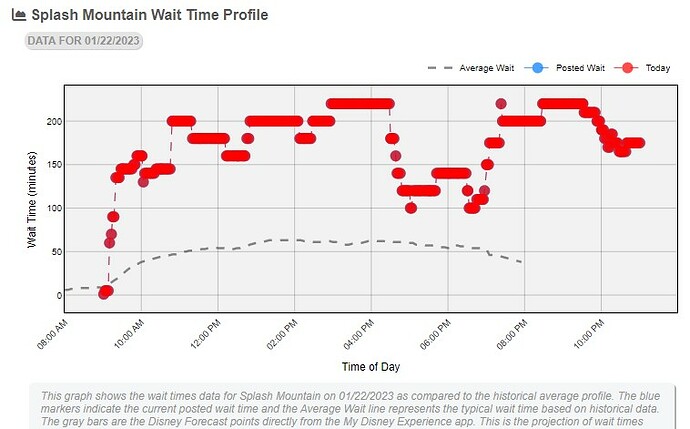 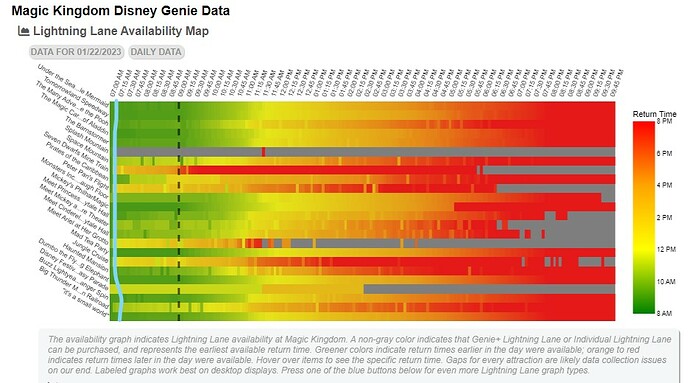 The wait maxed out at 220 minutes (3 hrs 40 min) and LL was sold out within 5 minutes. There was a brief lull in the early evening when the line dipped to 100 minutes but was 175 at closing.

(All the above are posted wait times - I assume actual waits were slightly lower but TP has shut off their data feed for Splash and I can’t access historical “submitted” waits as far as I can tell.)

I find details like the ones in this article interesting, but gosh it does make me sad: 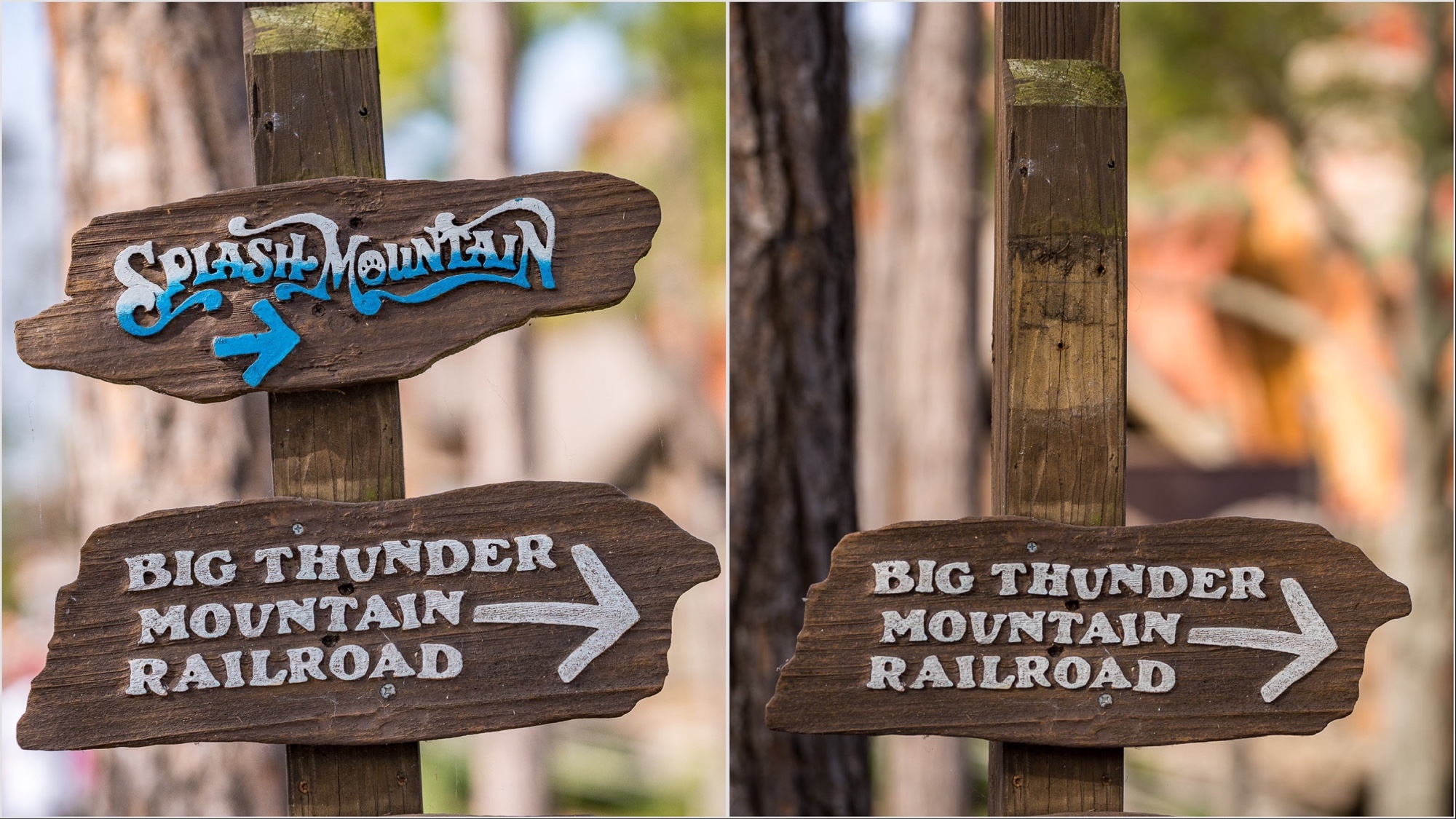 Just a couple of days after closing permanently, Imagineers are hard at work on transforming Splash Mountain into Tiana's Bayou Adventure

Im surprised no one tried to steal any signs or anything on Sunday. What do you all think they will do with all the stuff from the ride? Just store it forever?

Someone is selling Splash Mountain water on ebay

And it sounds like between Sat and Sun a lot of stuff broke and they didn’t bother to fix it.

I think it looked okay for our ride on Friday, didn’t it? Or am I just oblivious?

I think it looked okay for our ride on Friday, didn’t it?

Yes it was fine. Some of the animatronics weren’t working and some of the lighting was dim, but for the most part the important stuff was functional.

There were a lot of things broken on Splash for like the past year or even more. Brer Rabbit hardly ever ran in that circle anymore. None of the water effects that shot over your head in the “cave” have worked in years. Just tons of little things had slowly decayed away unfortunately. Which is somewhat understandable given the ride was running on borrowed time since before the pandemic…