RD Drive or Bus from All Star Music?

I’m sure this has been asked a billion times but looking for updated experiences. My family is the type that adjusts the optimized plans to include the big ride at rope drop by getting there super early (did it with Flight a couple years ago on last trip). To get early entry we are staying at All Star Music this time. I know it’s in the middle of a bus run so curious if anyone has an idea of what will get us to the turnstiles faster: first bus or driving? I know there must be other hard-core folks out there that know.

Example, for HS our plan says to not bother with RoR and just go Toy Story. We are hoping to get there early enough to do the RoR anyways.
Thanks in advance!!

This was just covered at length in Qwerty’s trip report and the overwhelming answer was take the bus.

For the others I would totally drive. DH and DD arrived at HS at ~635am and were like 3rd in line at taps

Here at MK today.
Have driven other days. Bussing was “ok” for MK. Took 20 mins. I think parking and getting over lagoon would have been harder.

In the morning the All Stars do not share buses.

THANK YOU all for the current examples! Much appreciated. I could be a salesperson for touringplans but I do wish they had a way to force a ride to the front, lock it and tell it how long to put in for the “wait” because it just doesn’t quite account for the super earlies like I like to be.

I can definitely see busing for MK. We’ve never bused before but I remember the car thing was a hassle due to the secondary transportation.
What was the opening time at HS and AK those days? (recent?) That’s what we are going for. One trip to MK we were first ones at turnstiles somehow and it was fun to chat with the cast member there.
Good to know Qwerty. Maybe I’ll flip a coin on Tuesday for MK. Ha!

Didn’t know that, thanks! I had read probably older posts that said sometimes they were full and skipped the latter two resorts. Glad they fixed that.

We’ve never bused before but I remember the car thing was a hassle due to the secondary transportation.

Yup. This is the issue with driving to MK, particularly for rope drop. Buses will get you to the actual gate. Driving means you have to walk or tram to TTC and then monorail or ferry to gate.

What was the opening time at HS and AK those days? (recent?

I believe the early entry hour for HS was 7:30 and for AK was 7? I’ll have to go back and double check and I’m happy to do that later.

Nice that less than an hour got you that close. It seems strange to be ok with waiting an hour but it seems to save much more than that overall and we prefer to wait in the morning heat…
Haven’t been to DW since 2019 so there have been a TON of changes. HS in 2 days!

I also say bus for MK - I stayed there at the end of May. Not that it would be the same, but we found the first bus from All- Star Music got us to MK super early (we had an 8:00 am Keys to the Kingdom tour with 8:30 early entry, so we were really trying to get there as early as possible). We decided to take a chance on the bus so we didn’t have to deal with the ferry or monorail from TTC.

We didn’t share a bus, and we had the fun experience of being the very first resort bus dropped off at MK. We had to wait to be let through security, and our bus load of maybe 20-30 people were the only ones waiting at the turnstiles for a good amount of time. We were first in line for the bus at 6:30, it came at 7:02, we were waiting for security at 7:26, turnstiles at 7:31, and walking into MK at 7:45. We ended up being in the first handful of people to walk into MK that day. 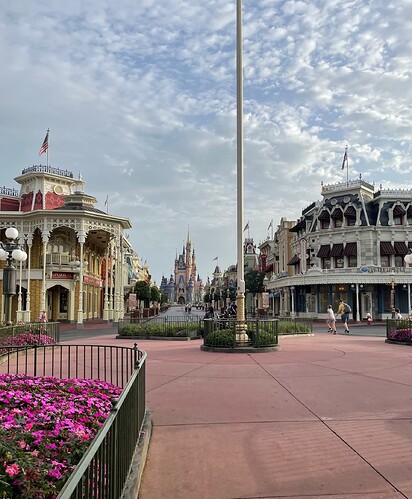