RCL ships for an adults only trip - 1st time cruisers

Hoping to find some recommendations for first time cruisers (middle aged adults) and what ships to look at, mainly on Royal Caribbean. Our trip duration would most likely be short in nature due to work schedules and leaving kids at home with grandparents, etc. Looking at a port in FL or Charleston (does RCL even cruise out of Charleston?)
I get motion sick on boats and have heard the bigger the ship the better, but I know those don’t usually do shorter cruises.
Any suggestions on what/where to start researching?
Thanks!

I recommend an Oasis-class RCL ship sailing out of Miami/FLL (or possibly Port Canaveral) and a 7 day Eastern or Western Caribbean itinerary as a good intro to cruising. Those are the biggest ships in the world and have a lot to see, just on the ship itself.

Another option is RCL’s sister line, Celebrity, which tends to have fewer kids - if you’re middle aged you might be amongst the younger people aboard.

We have cruised with RCL quite a bit, and are mid-60’s. We started when our sons were teens, but mostly sail as just the two of us.

No, they do not cruise from Charleston. We’ve sailed from every FL port they depart from: Tampa, Port Canaveral, Miami, and Ft. Lauderdale. If you fly to Orlando, it’s easy to sail out of Port Canaveral.

We’ve sailed on all classes (size groups) of their ships except the Quantum class. It’s true that the bigger ships (Quantum class or even the Freedom class) may have less motion than the smaller ones (such as Vision class), but there will still be some motion. Cabins in the middle section have less motion, as do cabins on lower decks.

Like you, we started with a shorter cruise, a 4-night, because we didn’t know:

You can find short cruises on all sizes of RCL ships, now that they have so many of the biggest ones (Oasis class). Our favorite size is the Freedom class. We haven’t sailed with Celebrity yet, mainly because RCL is cheaper, is good enough for us, and we’ve been part of their loyalty program for several years.

Matt was one of Len’s co-hosts on the old wdwtoday podcast. I have learned a lot from his site, podcast, and from the message boards.

I agree, an Oasis or Quantum class will offer you a lot of options, but I am excited that my next trip will be on a Freedom class ship (it is an itinerary I wanted).

Revisiting this topic again, what do you prefer about the Freedom class of ships over the others?

Take a look at the Wikipedia page for Royal Caribbean, it has handy charts grouping ships by size class. It helps you get a feel for how they compare in size.

I have not yet been on the Quantum class, so I don’t have much opinion on that group. I wasn’t super eager to sail on it when it initially came out, mainly because of where the ships were based then, but now we might try to do one in the next few years. They’ve added more ships and moved some around to ports/itineraries we like.

The Sovereign class (which are now either scrapped or moved to other lines) and the Vision class are too small. They don’t have as many things to do on board or as many dining choices. You’d definitely feel more movement on them.

The Radiance class is nice. We’ve done an Alaska cruise and a Panama Canal cruise on the Radiance of the Seas. The ship is smaller, and doesn’t have some of the things now found on most of the bigger ones (ice skating rink and Flow Rider for instance - fun to watch even if you don’t skate/surf).

Voyager and Freedom classes are close in size, with similar features. So far we’ve only done one cruise on a Voyager class ship, but we’ve spending two weeks on one in about 60 days. That will help me remember what that class is like. We’ve done Freedom class four times, but it’s been a few years. They both have a good variety of things to do and places to eat.

Oasis class is fine. It has plenty to do and places to eat. We’ve had rooms with balconies in the Central Park and the Boardwalk areas, as well as ones facing the ocean. Watch your cabin descriptions: lots of balcony rooms but not all face the water! As nice as Central Park is to walk in, I missed seeing any open water and the pool band was too close to our particular cabin when trying to have quiet time mid-afternoon. Although there are more activities, several of the major shows utilize advance booking (comedy club, AquaTheater, ice rink, and maybe the main theatre?). Our last four cruises from Florida were all on Oasis class ships. We’ve done it enough that we’re looking forward to downsizing to Freedom and Voyager class.

But for your first cruise, choose mostly on price and itinerary. I vote for choosing at least Voyager class or bigger. Oasis and Quantum class are definitely newer than the others and have some “Wow” things. RCL does try to refurbish older ships to keep them fresh.

What did you decide? Charleston only has a Carnival ship (which gets good reviews and is updated).

I always pick my cruise based on dates first. Both my Princess cruises were because they offered a very nice 5-n itinerary.

I would go for a 4 or 5-night for the first time. The first 24 hours is so overwhelming IMO.

I have never been on a bad cruise. I hope you love it.

RCL does try to refurbish older ships to keep them fresh.

Thank you for that information! I will do some more research! I think our problem is going to be narrowing down a date and itinerary. I still have to work around my husband and kids schedule and my mother’s schedule (babysitter) . I do think we will stick with RC and will ask my Father and step mother. They are very high up in ranking for RCL - they cruise all the time it seems but don’t want to feel pressured from them to go to a certain place or on a certain ship so I have not asked any advice yet lol.

Since your folks have a lot of experience with RCL, I think you can value their ideas. It’d be great if you could pick a cruise that stops at one of RCL’s private islands/beaches. Most of them sailing from Florida will (maybe not as many from Tampa).

Yes for sure want to make a stop on their Private Island!

I haven’t decided quite yet, will most likely be RCCL though! I was kind of hell bent on going back to St. Maarten where we honeymooned but those are longer trips and I don’t think I want to leave my kids that long nor can my DH take off a lot of work at one time (or a lot in any given year). I just found one out of Tampa that goes just to the private island and then a few days at sea and the price is really good - I have to have a balcony or I am not going lol

I have had interior once, oceanview three times, and balcony twice. I slept great in the interior, but I prefer to have some daylight. I do like to be on the lowest deck possible, and that lends itself nicely to Ocean view.

Tell me why lowest deck possible?! I was thinking the higher up the better the view. But I know nothing!

If you’re worried about motion sickness, lower is better because the movement is less.

Also much easier to get on and off at ports because you just have a flight or two to gangway vs crowds at elevators. Also it tends to be closer to main dining rooms, but not always.

I also like being able to see the ocean from sitting on my bed. Closer to the water there.

It’s just a preference I came to realize I had.

My MAIN preference when with my whole family is connecting rooms. I’d take a connecting anything for that feature. 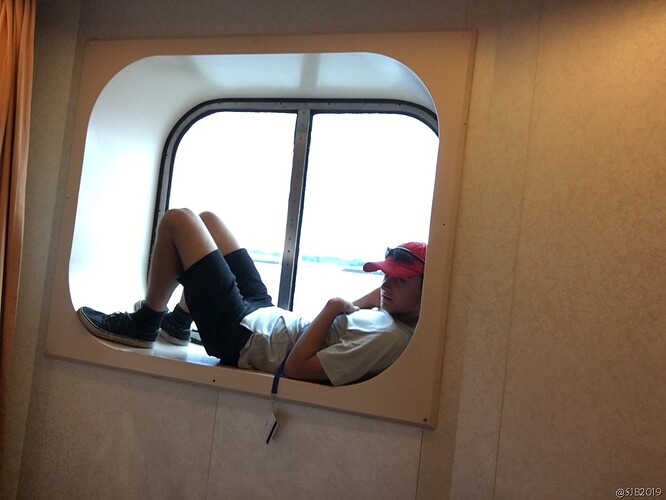 Found this one, too. 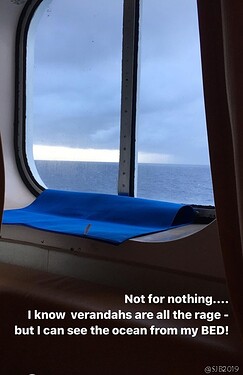 ah makes sense! so much to consider

now that is kind of cool…seeing the water from the bed. So many things to consider, man this may be too many for me!

I also think I want the balcony for some separate space from my spouse in case he makes me mad lol. JK but seriously having coffee/breakfast out there would be my jam I think (i am already considering taking me kids with me if I can talk DS15 into it, he’s scared of being in the “middle of the ocean” although he loves the water)

I would totally just get the balcony for your first cruise. More often than that, I am trying to find connecting rooms or economized. And we never use the balcony ourselves.