until they got to the mainland…then it descended into idiocy

That was Spielberg being Spielberg. And I hated it.

Have any of you read the original JP book?

Yes. A long time ago.

I actually bought a Folio Society edition of Jurassic Park as a birthday present for myself last year. Shamefully I haven’t read it yet. 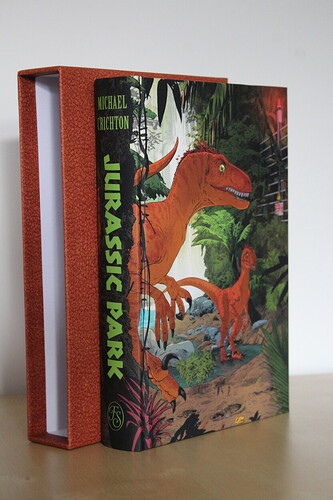 Yeah - they probably should not have even made it into a movie.

While I watch the movie, I keep wondering how anybody who hasn’t read the book can even tell what’s going on, because they skipped so much

And they made a mess out of the elves. But I am pulling away from dinosaurs. Sorry OP.

I should listen to it!

My main recollection of it is that the annoying girl is way more annoying in the book.

Big fan of the Westworld movies. Couldn’t get into the tv series.

While I watch the movie, I keep wondering how anybody who hasn’t read the book can even tell what’s going on, because they skipped so much

Did you watch the theatrical versions, or the special extended? We ONLY watch the extended versions, which have almost an hour more for each of the three parts. They parts they left out really were fine to leave out. A book purist won’t be happy, but truth is, for example, Tom Bombadil was really unnecessary to the greater story. Leaving him out was fine, even if he is beloved from the books.

Some changes people don’t like I felt served the movies well.

extended versions. And I am still not even through them all. They combined elves, so to speak. And yes, Tom Bombadil. But the audio book was 60 hours read. A lot is left out.

I just loved the books and the movies seem hurried.
Is that the way for HP?

Is that the way for HP?

Definitely!
There’s a lot left out. It’s understandable (thought not necessarily forgivable) why certain bits were left out though - not entirely essential to the overall plot.

A movie will rarely match a book. But as movies go, what they did with LOTR took a good story (but boringly written) and turned it into something we love dearly. The entire family comes over and watches the entire series at least once a year with us. We were just talking about the next time we watch it. We are due!

So, you can’t watch it expecting to see the book. You have to watch it as standalone. In that, it is great. I actually like it way more than the books. The music score is arguably the best musical score ever written. (We watched a documentary about it, and it was far more brilliant than even I realized.)

Yes…the HP movies also cut a lot out from the books. But for the most part, it was prudent cuts to make the movies reasonable length. I certainly wish more of the books were in the movies…but they did a great job with making judicious cuts (other than perhaps Half Blood Prince).

The music score is arguably the best musical score ever written.

This I agree with. I loved it long before I’d listened to the book.

Same with Star Wars. I loved the music long before I’d watched the movies.

I actually like it way more than the books.

I’m not sure I can say this about any movie/book. I love stories so much I hate to see them truncated.
I for sure loved the LOTR books and I can barely sit through the movies.

With the exception of LOTR, I agree whole heatedly.

But what is NOT worth watching are the movies Peter Jackson made from The Hobbit. Those are quite bad!

There’s a lot left out

But for the most part, it was prudent cuts

The prudent cuts would have been to the original bloated source material. Rowling desperately needed an editor willing to stand up to her after the third book.

For the movie, they swapped that brother and sister from the books. That is, they made the sister be the computer nerd instead of the annoying little sister. The computer nerd in the book was the brother. I think the change was fine, although perhaps a tad ahead of its time.

The girl in the movie was plenty annoying. Just not as annoying as the one in the book.

She, for example, is the one who attracts the T Rex by waving the torch all over the place.

I read it many, many years ago. Great book! I loved the movie, but the book is better.

I read it YEARS ago. Like, when the original movie came out. I remember liking it. I think I still have the paperback on my bookshelf.

I could have written any of this:

The original Jurassic Park is clearly top, not least because it is one of my all-time favourite films (judged on number of viewings)

I hate horror films. I don’t like to be scared.

I have no problem at all with Jurassic Park

Science fiction is my favourite genre. Who doesn’t love dinosaurs. And space?

Does Harry Potter count as science fiction? I don’t want to say that I like fantasy as a genre.

I generally agree with your rankings, but I like The Lost World enough that I put it above JP3 and all the Jurassic World movies. I saw a documentary with Spielberg and he talked about why he took the film to San Diego at the end, and they weren’t originally going to, but he decided the film needed a King Kong moment, and the Hollywood nature of it won over plausibility. I kind of like it, TBH. There are some cool / hilarious moments during that sequence.

There are some cool / hilarious moments during that sequence

Sorry…and I know you love everything…but the moment the dinos showed up in San Diego, the movie stopped being serious and was a big joke/parody. For example, the “Godzilla” moment with the Japanese tourists fleeing Trex was borderline racist and definitely bad taste. It wasn’t funny at all.

There were some cool moments in the movie…and overall I enjoy every one of the movies to some degree…but JP2 was definitely the worst of the bunch.

I put it above JP3 and all the Jurassic World movies

the moment the dinos showed up in San Diego, the movie stopped being serious and was a big joke/parody.

See what you’ve done, @Jeff_AZ? You’ve made me take sides with @ryan1 against you.