So I had a thought…wouldn’t it be great if we could get Disney to add a fitbit concept to Magic Bands? That way, I could monitor my steps and plan my snacks as needed without so much guilt!

Hmm - as the Disney demographic tends to skew “fluffy”, that might be s good thing!

Just ordered a “Magic Band 2 Puck Slide”. https://mb2watchslider.com/. You can add a MB2 puck to your Fitbit
or Apple Watch band. It doesn’t add any functionality, but it looks convenient.

I haven’t received mine yet. I’ll post when I’ve had a chance to try it.

Thanks for this idea . . . I just ordered one too.

Tragedy! They don’t ship to Mexico! Oh well, that’s why I got 2 arms I guess!!

I bought one for my trip to WDW last November. I have a FitBit, but I dont recall the model - an HR, I believe. It has a wide band and the puck BARELY fit. It was so tight that it finally busted on my last day. I was actually surprised it lasted the whole week, as I heard a crack when I struggled to get it to slide on the band. Also, it couldn’t be installed on the buckle side of the band so I had to hold my entire arm at a bizarre angle to use it and it was pretty much impossible to use on the hotel door. I wound up using my spare puck on a lanyard more often than the one on my wrist. I’m sure others will have better luck with different devices. 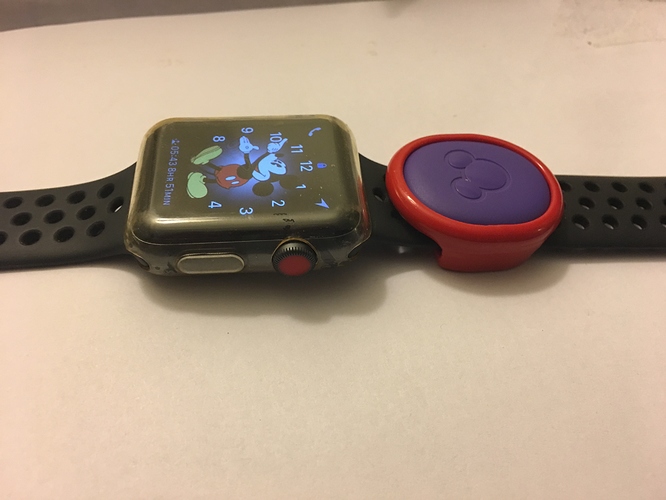 Just arrived. Fits tightly on the stock sport band, will not go on the after market Carterjett bands that I enjoy wearing.

Placed it above the watch face, such that on my left wrist, it will be easy to tap. 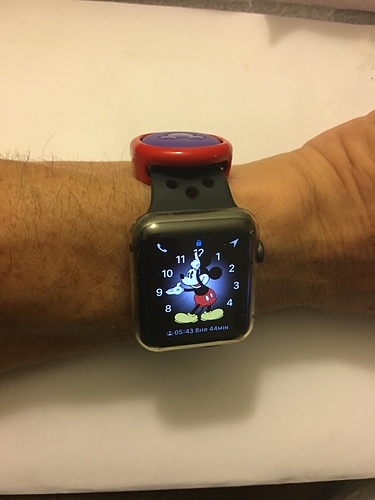 Forget the magic band where did you get that watch.