Post Mortem- Why was CC so off for week of Feb 23-29th? and HOW did anyone get to MK on Marathon Day?

We visited WDW Sunday Feb 23rd-26th and are confused as to how the crowd calendars got it so wrong! Sadly, I trusted Undercover Tourist to set my dates, which was supposed to be a 3-5/10 crowd level in mild weather- I took 4 kids out of school expecting a great week only to face 10/10 crowds all week. TP guessed a 6-7/10, so closer, but still off. The crowds greatly impacted our trip, made us miss a few things that were on our 'must do" list and left us feeling like we didn’t get our money’s worth. I am still grateful for having the chance to visit WDW, but What happened?

Also- for the love of God- HOW did anyone (who drove) get to MK on Sunday Feb 23rd? The day of the princess half marathon!?! We knew about the road closures (thanks to the liners), took the back roads, only to be sent on an hour long detour to no where. We literally ended up in the exact same intersection (just facing the opposite way) right by the exact same cast member that told us to take the detour!! We only found the parking lot by ACCIDENT!

Touring Plans posted this on their announcement regarding a delay in the March crowd calendar update:

“January and February were very different this year than in years past. So far in 2020, 3 out of every 10 days are a crowd level ’10’. That is unprecedented.”

It reminds me of a similar instance a few years ago when October suddenly had high attendance.

Also- for the love of God- HOW did anyone (who drove) get to MK on Sunday Feb 23rd? The day of the princess half marathon!?! We knew about the road closures (thanks to the liners), took the back roads, only to be sent on an hour long detour to no where. We literally ended up in the exact same intersection (just facing the opposite way) right by the exact same cast member that told us to take the detour!! We only found the parking lot by ACCIDENT!

This was my experience at MK for the Marathon in January too. The other car in our group who came the exact same way 3 minutes later got sent a completely different direction. I had done my homework, so spending an hour on detours was probably the most frustrating Disney experience I have ever had in many trips.

Yep - we took a long and seemingly pointless detour through one parking lot so we could enter another parking lot from the opposite direction. But using the back roads and not encountering any traffic there enabled us to use the extra hour I had built in for cushion for that insanity. Took us 15 minutes to get to the “detour,” then 30 minutes to park.

We were there Feb 5-11, also to unprecedented crowds. Our hotel staff (we stayed at Pop) told us that they had triple the South American tour groups they normally see. Airport gathering and lines when we were coming in and leaving would support that as well - the vast majority were flying south of Florida. Does that seem like what you might have experienced as well? Their school year runs March-December, so this is solidly in their school break.

What you experienced is very common during the Princess Half Marathon!! Looking back at your original post I’m glad I did comment on it. 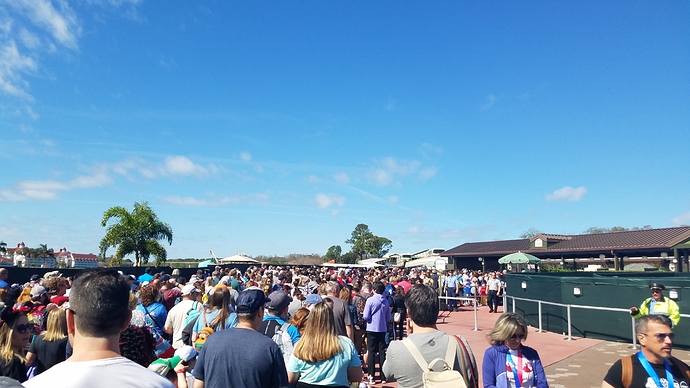 Was right there with you that week, it was pretty crazy expecting a 6, 7 or maybe 8 and getting a 10 after 10 after 10. We basically rope dropped MK with BOG, got a 7 Dwarves in… then took whatever didn’t have a crazy wait… then our FPs, then Carousel of Progress with no real wait, then we were pretty much done.

Similar plan with AK, but were lucky to get a seat at the Lion King show even though we arrived 30 minutes early (I was so close to not getting there in time). We had about 20-30 people behind us get a seat and the rest (hundreds) missed out. Was nuts.

EPCOT was I think a 7 or 8 when we went… was doable without having to stress out completely.

Only thing I can figure is the Star Wars hype brought in more crowds than usual for a Mardi Gras week. And maybe more marathoners stayed for ROTR, too.

It’s always so interesting to me how two people can have such different experiences on the same days. A friend just returned and when I inquired about getting around and the crowds related to the runDisney events, she said it was a non-issue for them. They used Disney transport so that may have helped in this case. But they weren’t at all overwhelmed by crowds. Sorry you had a bad time!!!

I think using Disney transport may be the key. We took the bus to MK PPO BOG on the morning of the half marathon in January and our driver was getting constant updates on which route to use.

I think using the buses must have been ok. We got a Minnie Van from CSR to AKL for our final breakfast. It originally said 11 minutes out when it found one…which turned into 40 total for them to pick us up. Mainly because they had dropped off a group at MK just prior to us. She said it took over an hour to get them to MK and even going off property didn’t shorten the time by much. We hit a bit of traffic headed to AK (which I know wasn’t related to the marathon, but was present nonetheless) but we got there in plenty of time for our reservation, only because I made sure we had a big buffer.

Several people I know had the same experiences throughout Jan and Feb. Had me thinking. Fall was a little slower than usual…I was there and it was not normal compared to other years at the same time. Wondering if maybe there were a great deal of people that normally take trips in fall for one reason or another had postponed till after the new year due to SWGE? I was almost one of those people and decided not to. Just a theory and I am sure that wouldnt account for everything.

A good theory. Has me rethinking skipping 2020 for a summer 2021 trip. Wanting to hold off as long as I can in the summer in hopes that both the Tron and the Guardians of the Galaxy coasters will be open, but worried that many other could be thinking the same thing. Life would be much easier if I wasn’t such a cheapskate and would go every year!

I was there 2/20 - 2/27. I did get updates regarding CL by TP. Apparently, it was Presidents day weekend, NASCAR, Mardi Gras and Run Disney Princess Weekend within the same time period. I did the run on Saturday and Sunday. The traffic on Sunday was horrible. Leaving Epcot on the provided Run Disney buses (not Disney transportation) to get to the Poly was insane. Dead stop traffic. I was on the bus 1 hour and 15 min. The day before it was 15 min tops. My friend was on another bus and they got lost and the driver was driving the wrong way on the road. While in AK on CL9 Friday 2/21 I didn’t see a lot of options for FP+ for my group size. At HS and MK lots of FP+ options became available. For me personally, CL was too much to navigate at Epcot and AK. HS was super busy in AM but crowd sized diminished later in the day.