Alright, I’m back. I’m sure this has been asked but would love opinions from people who have stayed at these two resorts.

Having second thoughts. Trying to decide-- should we keep our poly garden club room or switch to CR theme park club.

My second thoughts are. Because I’m not a fan of the poly not guaranteeing a balcony or patio. I would try to request it. I’m also worried about crowds/ noise at the poly-- should I be? Our room would be towards the quiet pool. Poly sounds like the happening place but we are traveling with two young kids. CR sounds convenient great view. But not as magical for my 5 and 2 year old? Wishing the theming was better.

Thanks for your thoughts (again!!)

I like the atmosphere at the Poly more but you can’t beat the convenience of walking to MK from CR and vice versa. A monorail going through your hotel seems plenty magical for the kiddos. If I were you, I’d probably go CR and save the Poly for when the kids are older and both able to do the pool slide at the Poly, which is way cool because it’s in a volcano.

I would choose Poly over CR. Loved the atmosphere and overall them. Loved being able to walk to the TTC and access Epcot as well as monorail to MK. Fireworks on the beach were wonderful as was dinner at 'Ohana and Kona. When we stayed at CR, I felt like I was staying in a nice hotel…not really a Disney hotel.

I also vote for the Poly. Your kids are going to be passed the F out by the time you get back to the CR at night and won’t even notice the view.

Agree, hopefully, kids should go to sleep fast. View would be for myself and DH to enjoy post bedtime.

I stayed at Poly CL. I honestly think a lot of people request the 2nd floor for easy access to the lounge.

Interesting,I wouldn’t have thought if that.

Could you tell me about the noise level around the Hawaii building? Will we notice the quiet pool?

I had a garden view room. This was my view: 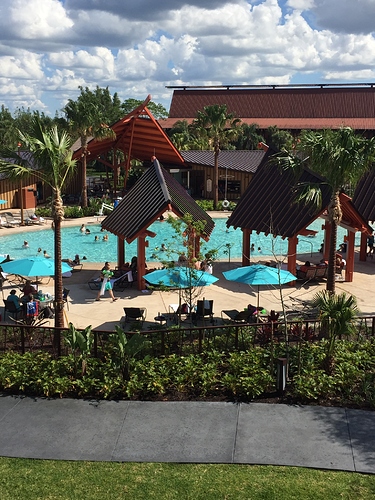 I was traveling with a two year old that needed a daily nap and there was never a noise issue.

That’s a pretty view to look at. Thanks for sharing. You understand as my youngest will be almost 2 at the time. Thank you!

That stopped. If you look now they added a “pool view” category, which the entire Samoa building now falls into.

This is club level, which is its own building. There are only two sides. It is the Hawaii building .

We just stayed at the Poly last week and loved it. We found it quiet and relaxing. Great dining options. We had a an enjoyable boat ride from MK back to the Poly. It’s been awhile since we’ve stayed at the CR (we usually stay at BLT). Being able to walk is a big advantage.

Stayed at CR club level but not Poly club level (have stayed at Poly standard rooms). I have to say CR was pretty noisy, especially in the morning during the breakfast time with chanting and clapping at Chef Mickeys, but that may not be an issue for you - I had 2 teenagers that did not want to get up at 7, which is when the noise was at its peak. We were not at the hotel at lunch or dinner times so not sure about the noise level then for naps. The elevators at CR were also packed most of the time, which was hard for many guests that I saw trying to get strollers back to their rooms. The rooms at CR are smaller than Poly and the built in desk area took up a good bit of space in the room. I did love the club area and the offerings there were great. But I would go for Poly before CR.

We did a split stay between the 2 a couple of years back. We did Poly first and then CR, and was disappointed when we got to CR and lost that laid back feel to the Poly. CR was nice as we had a Theme Park view, odd numbered rooms give you a view of the castle from your bed, and yes the walk is nice. However the boat at Poly is very convenient and nice, walk to TTC and CR the elevator situation was inconvenient. We have done Poly CL but only Lagoon view room, we did get ground floor and it was amazing. But since one side is all Standard I think your odds of getting a patio or balcony are better than not.

Thank you all-- I think we will stick with Poly! Perhaps a future visual check out CR-- just something about it!