Are the PJ Masks anywhere to be found in the parks or Disney Springs? My kids have recently become obsessed, but I’m not seeing anything online. Rumors of future appearances are also accepted/appreciated

I don’t believe so. My understanding is that PJ Masks is not actually produced by Disney although it was shown on the Disney channel. So I don’t know if they would ever turn up in the parks. My kids love them too!!

Have you checked Kenny the Pirates character locator?
I believe they aren’t represented in the parks because they aren’t really Disney (like Miraculous!) but you can check for sure at Kenny’s

Oh I didn’t know that! I just assumed since it was on Disney+. Hopefully they work around that

Do you need to have access to the app for that? I don’t see anything online but if I end up downloading the app, I’ll check it out closer to our trip! Thanks.

I’m not sure if a cost is involved but here is the link:
https://www.characterlocator.com/

What’s a PJ mask? In my world a PJ is a parachute jumper, and I doubt those kind of masks are what you’re talking about… 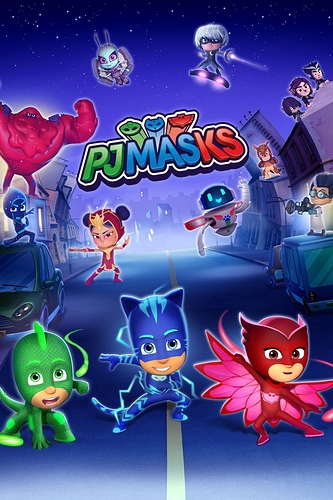 It’s a tv show about three super hero kids who only fight crime at night (hence the “pj” or “pajamas”). I highly recommend limiting your knowledge any further unless you want to have the theme song stuck in your head for a week.

Disney Jr. in general has spotty representation. There are some ways to interact with Disney Jr. characters in HS, at H&V breakfast, and in and around the dance party show, but other than that they don’t really get any play anywhere else (minus Doc McStuffins at Rafiki Planet Watch). Which is a shame because my kids are right in that target market. Vampirina, Roadster Racer Goofy, and Fancy Nancy are about it right now at H&V, they seem to switch every few years (used to be Handy Manny and/or Jake and Neverland Pirates). The Disney Jr. show will have more (looks like Doc and Lion Guard), but not all as live characters.

I miss the old Disney Jr show, it was spot-on for preschoolers.

unless you want to have the theme song stuck in your head for a week.

That was uncalled for!

Though we never watched the shows, my kids LOVED Bear in the Big Blue House and Pooh Bear Disney Jr. show circle 2005ish…

Sadly it’s true. The last time we went, my two olders were in preschool and my youngest was still an infant. There was the show, and some meet n greets at hollywood studios. I think we met Jake from the neverland pirates, and Sophia, and the old Disney Jr. live show (I forget what it was called.) I thought it was because Disney Junior as its own seperate channel was only a couple years new. I thought this trip, now that my youngest is in kindergarten and is at the upper end of that age demographic, there would be more Disney Jr. stuff. She LOVES Doc McStuffins (she has many medical conditions, so spends a lot of time in the hospital and at doctors’ offices, so she finds the show relatable I guess?) She likes Vamparina okay, but H-A-T-E-S Fancy Nancy. I’ve booked the breakfast (I’m less than enthusiastic about Hollywood & Vine) so she can have more interactions with the characters she likes, but I’m just really surprised at the lack of really popular preshool characters/shows. Maybe because the shows don’t stick around that long, it isn’t a good investment since they have to change with the current trend??? I know both of my daughters, even the nine year old, would be really happy to see some Puppy Dog Pals going on in the park