Theme of the trip: A mixed bag of ups and downs

We just arrived home in Ohio and I know this is the WDW forum and not the DCL forum, but I figured I’d post here for the sake of completeness.

After our hot and humid AK day last Sunday, I stayed up late re-packing our luggage so that it could be magically transported from Yacht Club to our stateroom on the Dream. This was challenging because we had a “standard” hotel room and not a suite, and everyone else was dead tired and wanting to sleep. So at 9:30pm I made a cup of coffee, shoved all the luggage into the bathroom area, and performed a few small miracles to get everything repacked without keeping anyone awake.

Monday morning we had a tasty breakfast at Ale and Compass after which I wrote trip reports 1-4 on the balcony waiting for our 11:30 DCL transport.

Walk to Beach Club. Board bus. Visit a few other resorts to pick up people. Drive to the port. Couple of quick security lines and a short wait at the top of the deck 6 stairs and viola! At about 2:00pm we’re in our stateroom and ready to get this show on the road! Er, sea.

Day 1: Nassau
After the park days we wanted an unstructured port experience so I booked a day pass at the British Colonial Hilton within walking distance of the port.

I had grand visions of spending the day with my kids building an epic sandcastle, and for this purpose I bought two packages of sand toys and dedicated an entire duffel bag to transporting them from Ohio to WDW and then to the Dream and then finally to the beach at Nassau. This was actually one of the things I was most excited about, so I was very disappointed to learn that DD9 has decided she hates sand. She refused to walk on it and spent the day at the hotel pool instead. (“I hate sand and refuse to walk on it” is sort of the thing a parent should know before planning a vacation to the Bahamas of all places, but whatevs)

Thankfully DS7 was into it and we had a good bit of fun.

The beach area at the BCH isn’t huge, but it was definitely not crowded and the lunch was decent. All in all, it was a good day. 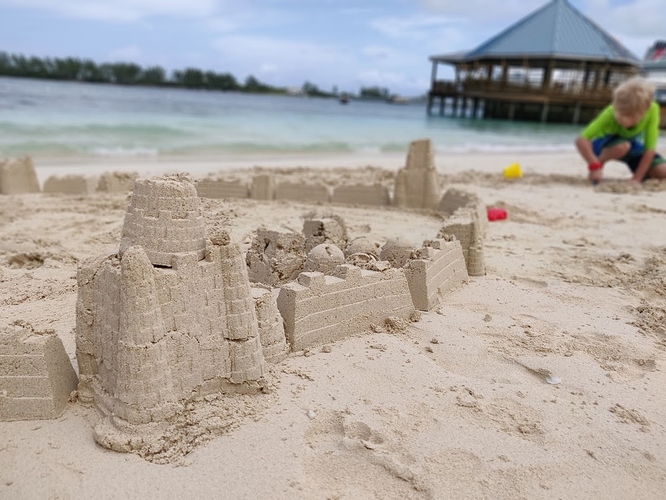 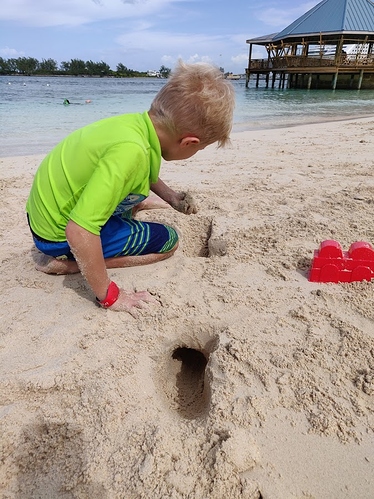 This was supposed to be the highlight of the trip. It was and it wasn’t, in different ways.

We get the kids up for breakfast and they’re whiny and tired. We get everyone in swimsuits and load up all the swimming and snorkeling gear and get off the ship.

Then I realize that I forgot the sandcastle stuff, so I walk all the way back to the stateroom to get it, then walk back off the ship and make the 7-minute walk to the beach area and then walk up and down the beach until I locate my family. (Not having cell service makes it much harder to find people once you’ve separated!)

DD9 is still refusing to have anything to do with sand and since DW hates the beach too, we split up again. DS7 and I go off in search of the water play area and another sandcastle adventure.

We find a smallish water play area that he finds disappointing, and he says he wants to build the castle instead, but by the time we get to our chairs he’s screaming about how his armpit stings. I look and there’s this tiny little scratch or rash or something that I’m guessing the seawater irritated, and now he’s begging for mom, and telling me he just wants to go home, and so I give up. I take him back to the stateroom where we’re soon joined by DW9, DD9, and DS7.

With memories of AK fresh in our mind, we decide to sacrifice our daylight plans at the Altar of Screen Time And Poolside Movies, hoping that the blood sacrifice will turn the whiny-ass creatures that woke up in our kid’s beds back into tolerable human beings by nightfall.

But dammit, I wanted to see Castaway Cay, so after getting everyone settled in the pool I make my third trek off the boat and down to the island for a solo tour. And it was lovely. I had a delicious BBQ lunch. I took the tram to the adults-only beach and enjoyed Serenity Bay, where I was able to wade about 300 feet out to sea and the crystal-clear water was never higher than my waist. And I rented a bike for a short (very short, due to the heat!) ride. 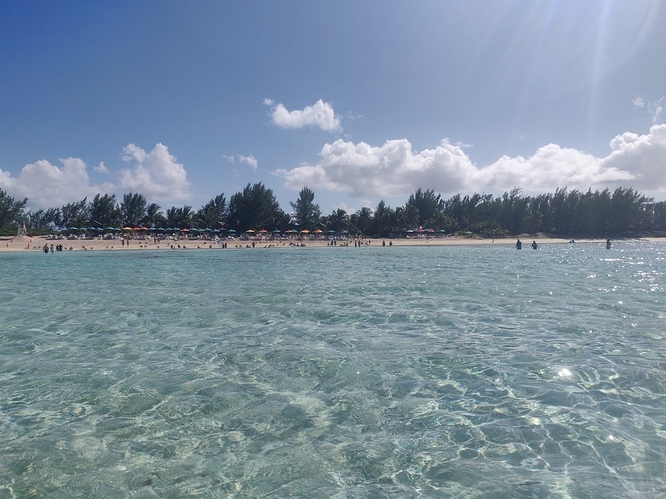 A couple of hours later I was still having a blast but feeling guilty for being solo, so I joined the kids at the pool for a bit. I still can’t believe we sailed hundreds of miles out to sea to spend all day in a tiny pool, but to each their own. All in all I thought Castaway Cay was fantastic and I’m bummed that DW and DD9 are so opposed to beaches in general, because I may never get to go back.

Pirate night was fun, even though we didn’t do much except dress up. At least I caught the fireworks from my verandah while everyone else was asleep.

Thanks for the report. I myself would never do a cruise since I’m claustrophobic but I am curious about them.

I myself would never do a cruise since I’m claustrophobic but I am curious about them.

Honestly, I was surprised at how spacious everything felt.

Our room had a verandah which really helped the room itself feel larger and more open. The main atrium area is huge. The restaurants are huge and have high ceilings. The elevators are like any normal hotel elevator, if not larger. The pool deck had tons of room to move around. The main hallways and stairwells felt very open as well.

The hallways to the individual staterooms were narrower than your average hotel hallway, and the bathrooms themselves were of course tiny and had no windows, but otherwise I was really surprised at how non-claustrophobic it all felt.

There have been times where I’ve thought how romantic the idea of a cruise sounds. We know several folks who do cruises a lot and enjoy them. But each time I have suggested the idea to my wife (always trying to catch her on a particularly good day), she is still quite sour to the idea.

Hearing your account, I’m afraid, only seems to reinforce that. I’m wondering if, for us, the IDEA of something might be better than the reality of it.

The irony is, I’m like your wife. I hate beaches. I mean, I’ll go. My wife loves them, and the kids enjoy them, but me? I find it a bore. (Although, last trip, we did hit a beach for about an hour where I napped as they all scampered about. Anyhow, my wife starting collecting sand dollars. But then, after a short time, my son asked her what that was in her pocket, and the sand dollars were desperately trying to crawl OUT of her pocket. My wife kind of freaked, because she had assumed, incorrectly, that the sand dollars were actually dead! I did find that humorous, and would have missed out on a chance to laugh at my wife had we NOT gone to the beach!) I would enjoy staying on the ship, I think.

My wife, on the other hand, loves the beach, and I could see her enjoying the excursions to shore and the beach.

Ah, well. Your trip report probably wasn’t meant to dissuade, and others might read your report and take away the complete opposite impression!

Regardless, thanks for sharing.

I would enjoy staying on the ship, I think.

My wife, on the other hand, loves the beach, and I could see her enjoying the excursions to shore and the beach.

To be clear, you don’t have to get off the ship. In fact, many people choose to stay on board at Nassau because the port experience isn’t compelling for them and there are fewer other people in the spas, pools, restaurants, etc. There are shipboard activities running throughout the day so there’s never a lack of things to do on board.

It would be totally workable to have breakfast together, split up for the mid-day where your wife and kids do the beach and you explore the ship, and then meet back up for dinner and evening activities.

In my research I’ve read that Royal Caribbean has been investing in their ships and their kid’s clubs. The Unofficial DCL Guide or whatever it’s called has a good comparative analysis of RC and DCL and it sounds like RC provides a pretty good experience for less of a price premium that Disney. It might be worth taking a short 3-4 night cruise on a non-Disney provider just to determine if cruising works for your family. And if it does, you could then book a DCL cruise with confidence that you’ll get your money’s worth.

Not necessarily trying to convince you, just saying that there was more to the cruise than I expected and I’m glad we went, even if it’s not something that we’re going to repeat frequently.

To be clear, you don’t have to get off the ship.

I don’t think I’d mind the cruise at all. After all, I’m the one who brings it up to my wife. But my wife is pretty dead-set on hating it. And if she ain’t happy, I ain’t happy!

It would be totally workable to have breakfast together, split up for the mid-day where your wife and kids do the beach and you explore the ship, and then meet back up for dinner and evening activities.

Oh. Then I’d be miserable.

I’m not a loner, at all. In fact, twice I had to accompany my son to Toronto as a chaperone (since he wasn’t 18 yet) when he was at some conferences for Mozilla. Beautiful city, Toronto. Lots to do. And I tried to do them. But I just felt alone and found myself texting my wife CONSTANTLY the entire time I was away. Everywhere I went, I was like, “I wish Marsha was here with me to see this.”

Not necessarily trying to convince you

That’s interesting that your wife is the one who loves beaches yet doesn’t want to try a cruise. I had to be dragged onto our first cruise because I hated the idea of both. We now have our third booked, although we learned quickly that only our son likes the more contemporary market like Royal Caribbean and Norwegian. Disney is much more expensive, and thus we only do 4-5 day trips, but the Golden Age atmosphere really makes it.