I know it is early, but wanted to see if anyone plans to do the dining package for the parade in DL. I would love to hear about your experience if you do. Thinking of doing it in July.

If it is similar to the dining package for MSEP I would definitely do it (again). We were in a reserved area in front of the train station and just stayed in our spots for the fireworks after the parade.

I looked at it but was surprised by the price (almost $40 for Plaza Inn chicken). I will probably just stake out a place to watch when I am there in 10 days. I like the area by the Alice bathrooms for parades. Of course I am paying $79 to do the Paint the Night Sonoma Terrace party, so maybe $40 isn’t out of line.

We are going in July for my birthday. My family is not “show” watchers, so in the 7 times we have gone, I have never gotten to watch a parade or show (including fantasmic). I have seen the fireworks from DL once (multiple times from room, but it isn’t the same). I have only seen WoC from our room at PPH. All This to say that b/c it is my birthday, I am hijacking the trip and packing in as many shows/parade as possible. That is going to be met with a lot of resistance, so I figure I better hedge my bet by creating an environment that we don’t have to spend an hour to stake out our spot ahead of time. I figure (hoping) that at PTN parade will be easier to get a spot, as DCA has more room and we can squirrel a spot about 20 minutes before. I will also be doing the Upgraded RBT f! Package. If reports are come out that PTN spots are still hard to come by, then I might add that dinning package as well.

I love that you will finally get to watch the shows! I will check out the viewing areas next week when I am there and let you know what looks good.

Thank you! That would be awesome!

Here is what I thought of the parade options: I loved the view, food and seat from the Sonoma Terrace reception, I actually went 2 nights in a row as I got treated the first night. The view: 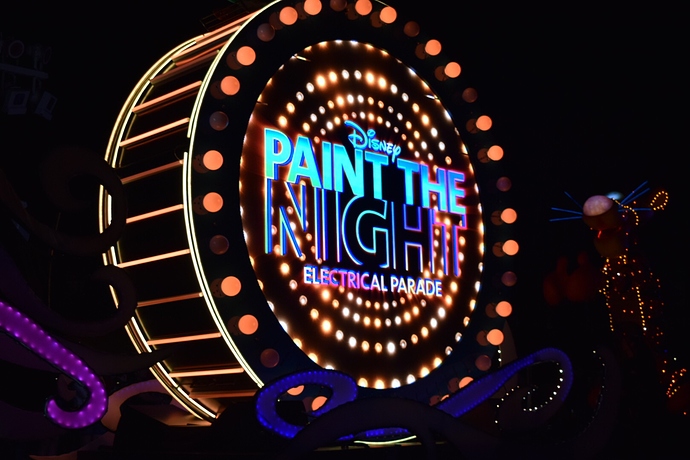 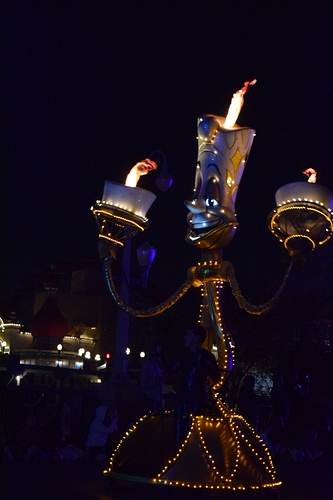 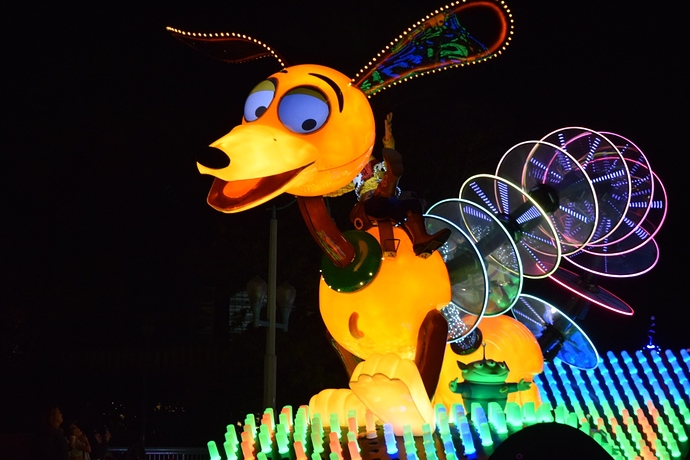 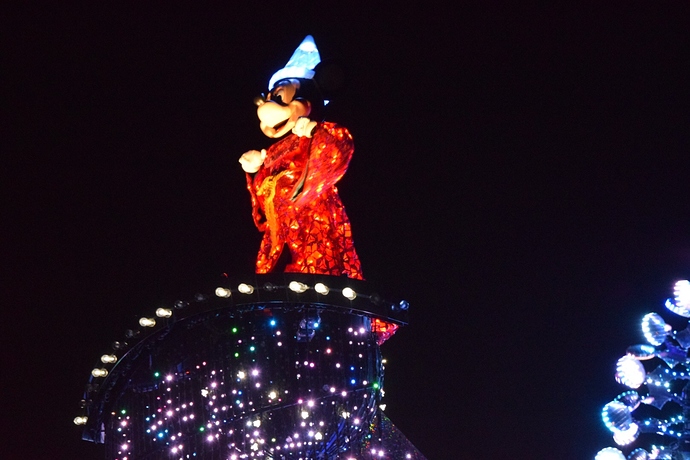 While this was great, there are many, many spots to see PTN without paying for a package. If you are only doing one, I would choose the Pixar Play Parade package at Plaza Inn. I had a very difficult time finding a spot to watch, and I was alone. People were lined up 5 people deep along the parade route 45 min early. Way too many people for my liking, I like a clear view so I can take pictures. I saw 2 separate areas for the package, one back by IASW and another in the Hub close to Refreshment Corner. Here is a pic of the Refreshment Corner area, pic taken at 5:26pm for a 6pm parade. Plenty of space in the package area. 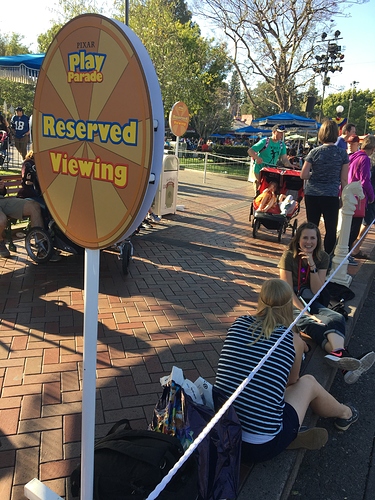 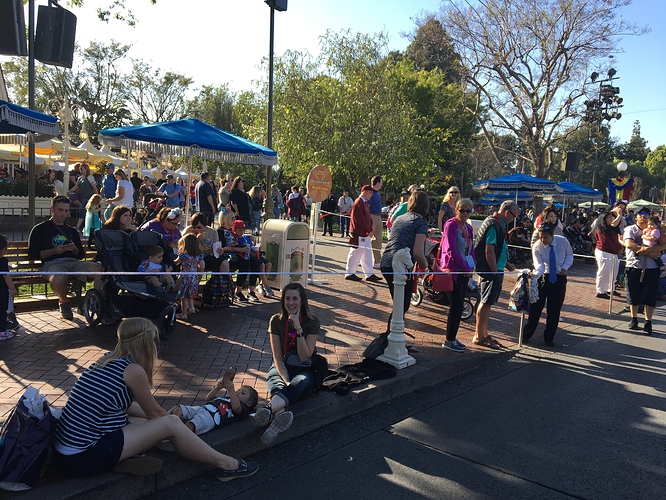 I think for future trips if we want to see the Pixar parade I will book the Plaza Inn package. PTN seats from the Carthay dining package looked amazing, but not sure it is worth the high cost. We watched the second F! with a FP, it was a pretty good view but I prefer watching from the BB package area. I have not tried the RBT package so not sure how good that view is. I do know my friend said people were walking in front of the tables, which would drive me nuts, but most people probably wouldn’t notice. Hope this helps!

We went over the weekend & we had zero issues at all getting a spot for PTN, even with only one parade scheduled each night (there were Grad Nights both Fri & Sat so DCA closed early at 9pm during the 1st parade). We are die-hard PTN fans & are used to having to dedicate 2-3 hours to see the earlier parade and once even (for the closing night on Labor Day weekend 2016) spent 6 hours staking out a spot for PTN.

It was amazing to me that at 2 hours before, ropes went up around viewing areas that were completely empty. We arrived at the area where we wanted to sit 1 hour 45 min early & because it was completely empty jumped into line for Ariel’s. Waited 8 min, rode the 8 min ride & came back out to a still barren viewing section & had our pick of front row seats.

For Pixar Play, we actually had an opposite experience than @Wahoohokie (Hi Karen!!!). We watched the 2nd parade both times though so that might have been the difference? Both times we found front row viewing spots less than 45 min. prior to the parade.

I am a HUGE advocate of always watching the 2nd parade (when offered) because it always seems less crowded to find a spot. This trip we found even more reason to so: On our 2nd day we happened to wander into Fantasyland from Frontierland to do the teacups at around 3:30pm, (blissfully unaware that the Pixar Play parade was about to get started as the side of the hub we walked on isn’t parade route & we didn’t pay attention to the other side of it at all). As we walked through the castle, I literally stopped & turned to the hubby & said “what’s going? Where are all the people? It’s 3:30pm and there are NO people in Fantasyland??” We passed by a 30 min posted wait for Peter Pan that was likely under that (maybe even 20 min) and toward the teacups. As we got in line for the teacups we realized that the parade was about to start (and that answered my question of where all the people where). After we got off the teacups we noticed the line for Alice looked suspiciously less than the 30 min posted & had a view of the parade that had just reached the area. So we got in line & got 8 min of parade viewing time because our wait was only 8 min. And then because Alice is such a unique Disney dark ride that has a component that spits you back outside (my favorite part) that happens to be right next to the parade route where there is no room for a viewing section, we got waves from the float passing by (Up!) as we finished up our Alice in Wonderland ride. It was an incredibly unplanned moment of magic that I loved & demonstrated to me why it’s always better to skip the first parade & use that time to do other things while everyone else watches the first parade. We tried to hustle to Peter Pan right after that but the line had grown to truly be a 30-35 min wait so we bailed after about 5 min since it was in direct sunlight at nearly 4pm. But if we had planned better we probably could have hit Peter Pan 15 or so min. earlier and been able to do Alice still with the similar experience we had.

Edited to Add: All this to say, unless you are going over crazy busy days of crowd level 10’s don’t spend the money on parade viewing packages to save you the time, because I have found they generally don’t. If it’s for the experience, then by all means, go for it because both of the PTN ones sound amazing (director chairs in front of Carthay & Terrace party).

Hi Lorraine! Hope you all had a great weekend in the parks. There was only one Pixar parade the day I watched, at 6pm. Had there been 2, might have been different?

Thanks Karen! I need to get my act together & post pics on the chat. We have just had a lot of craziness & stress (aka normal life) since getting back. I do think having 2 parades makes all the difference. I wish they always would!

Yes, would love to see some pictures!

Good to hear! What is the latest you would recommend heading over to each parade without a dining package? Like I said, it will be like pulling teeth to get them to even go to the parades, never mind staking out a spot for an hour. The current predicted CL is (7/15) DL 4/DCA 6 and (7/16) DL 7/DCA 7. I expect that due to summer, there will be two of everything (parades, f!, WoC). We will only have two nights because our first night will be blocked out.

If there are 2 parades then definitely do the later one & stake out a spot 30 min. before. If you don’t mind standing in the back of a section then it’s possible to find spots with even less than that.

We watched the second parade on Sunday, which was at 6pm. At 5:40pm, we went around the Matterhorn and found a reserved area where it was sit down viewing area! It was an awesome viewing spot and only waited like 20 minutes. I don’t necessarily think you need to book a dining package to see the parade. I would recommend somewhere around the Matterhorn or close to It’s a Small World to watch it.