I’ve tried searching but couldn’t find anything more recent than 2014. Just wondering if someone can explain the parent/child swap. I’m new to this forum, and know that this must have been talked about a million times, so if this is redundant, I apologize. If you reply, please can you also explain your abbreviations? I’m not really sure what those all mean yet.

Let’s say you have 4 in your family and 1 child is too young to ride. All 4 go to the entrance. Parent 1 and older child go onto ride. (If you get a fp you will only need 2. ) Parent 2 receives a return anytime pass and stays with younger child (once you all 4 check in at entrance and get rider swap pass, parent 1 and younger child can go do whatever - you do not have to wait at entrance). The pass can be used right after parent 1 rides or anytime during the rest of the day. So when it’s parent 2 time to ride, the pass is good for up to 3 people so older child gets to ride again without waiting in standby long line. And parent 1 can take younger child and pass the time however. Even at another ride and then you meet back up Hope his makes sense.

Just to add that the Rider Switch pass doesn’t have to be used the same day. We’ve used them a lot, and they have always been valid for several days. Last time we ended up giving one for Expedition Everest away, since we never got the chance to go back and use it (my sister got an ear infection so I spent one AK day with her in urgent care instead…bleh).

What if your child is old enough to ride? I have an older child who CANNOT get wet on a ride. We are not comfortable leaving him alone at this point. Traditionally one of us has just missed out on the ride, but if they would allow us to do this, that would be great!

When Parent 2 goes back to ride, do they have to wait in the long line or can they skip ahead somehow? (I’m wondering if they can use the FP line despite not having a FP reservation.)

The Rider Switch ticket works as a Fastpass, so they use the Fastpass line.

We made use of Rider Swap a lot during our trip. There’s four of us. Hubby and son would get in line and tell the cast member at the beginning that they wanted to use Rider Swap. They would sometimes want to see me and our daughter to verify there was a reason to use rider swap. Then, they’d give hubby and son a badge to carry through the line with them. Daughter and I would usually wait near the attraction, but you don’t have to do that. Once inside, the cast member would swap the badge for a rider swap pass. It’s basically a fast pass for up to 3 people. We visited October 7-13th and all rider swaps we received were valid until October 31. Once hubby and son were done and I was ready to ride, my son and I would go to the fast pass line, show them the rider swap pass and proceed into the fast pass line.

It’s intended to use in the case a child is too small to ride, but I would hope they would be understanding if there was a reason an older child couldn’t ride.

Their policy specifically states it can be used if somebody doesn’t want to ride. However, a lot of CMs won’t allow it in those circumstances. I’d take a screenshot of the policy just in case. 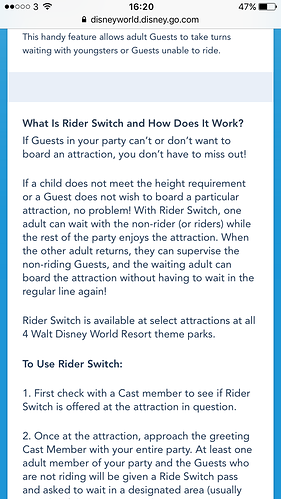 This is the link: https://disneyworld.disney.go.com/en_GB/guest-services/rider-switch/

That is a great explaination. The screenshot is particularly helpful. My parents are seniors and will be with us, although they are active. I am not convinced Pops will be up for simulators, and we wouldnt feel comfortable leaving him on his own. So, in theory Rider Swap should apply to this member our our party, wouldn’t you say?

I’ve only heard it used with people that cannot be left alone such as adults with significant disabilities and children.

In theory, yes. I do think that CMs will refuse if you ask for it, but that’s when I’d show them the screenshot. I don’t know how successful you’ll be.