We’re currently booked at Paradise Pier late Aug. with an infant, a 5 year old and a 6 year old. This is our first California trip. We’ve stayed at Polynesian, Wilderness Lodge and Animal Kingdom Lodge at WDW and loved all 3. In fact, our kids’ favorite parts of the WDW trips were resort-related: pools, marshmallow roasting, and bunk beds. I thought PP would be convenient since so near the parks, especially since we’re traveling with an infant, but now that you cannot cut through Grand Californian, I’m second-guessing our hotel choice and considering other options. Grand Californian and Disneyland Hotel are out of our price range. Paradise Pier and Courtyard Theme Park Entrance are approx. the same price, appear to both be a 15 minute walk to the parks, and have water slides. Majestic is approx. $100 less per night but a 30 minute walk to the parks (or free shuttle.) Courtyard and Majestic have bunk beds. PP has extra magic hours and Surf’s Up breakfast with Mickey and friends. Majestic is further away, but significantly less expensive and it appears more themed than PP or Courtyard (the kids would like the castle bunk beds.) I’m leaning toward Majestic and putting the room savings toward character meals and BBB. Any recommendations? Or is there another resort (under $320/night) that you recommend for a family who will spend significant time at the hotel? We’re staying for a week, and planning 3 or 4 park days, 1 or 2 beach/hotel days, and an LA day (La Brea Tar Pits and Griffith Observatory.) Thanks in advance!

I think that I would consider the Courtyard Anaheim Theme Park Entrance if you want the resort experience. I haven’t stayed there, but I am usually happy with the Marriott chain. I usually stay at the Marriott next door and it is an easy walking distance to the front gate and there are 3 reasonable restaurants right there for meals outside of the park. (We usually stay at the Best Western Park Place Inn or the Marriott Fairfield when we stay off-site, neither of which really offer the resort experience. But we pay around $175/night.)

We change our DLR plans if we are staying off site. Instead of using the extra magic hours, we go to the opposite park at opening. (Though if you have 3+ day passes, you can get one magic morning pass for DL) For the character breakfasts, it is difficult to get to the resorts early in the morning for the breakfast at PP. Minnie’s breakfast is good that is in DL. There is Arial’s too for all meals. For dinner there is Goofy’s Kitchen, but it has changed and is not as good as it has been in the past.

For your LA time, is there a reason that you are not staying in LA? The traffic between OC and LA is horrible and you will spend a huge amount of time traveling between the two. When we travel we split our time between LA and OC because we have family in LA and then we go to Anaheim for the resort. We will spend about 2-3 days in LA and then 3-4 days in DLR. Then we only make the drive once. If you are flying in and renting a car, we will only have the car for the LA time and return it when we are at the parks to save on rental and parking fees. Just a thought.

We are not huge on resort time so I don’t have any on the ground experience with either Courtyard Marriott nor the Majestic, but based on their locations, I would definitely go for Courtyard Marriott over Majestic. The savings don’t make up for the location plus there’s not as much convenient food in walking distance like you will get at the Courtyard Marriott. Lastly, the Majestic used to be a Sheraton and since leaving Sheraton has had reports of lower quality, combined with the fact their parking lot is a questionable lot where cars have been broken into.

So, from your off-site options, Courtyard Marriott is definitely the better option. It also has great reviews on large rooms which is great for a family of 5. In addition, the mini water park is a big draw for kids, although reviews have rated it as small/cramped/not that appealing for older kids, but your kids may just be young enough to love it anyway.

My personal opinion on the Courtyard Marriott is that if I am going to pay that much, I would rather fork up the little extra to be onsite at the Paradise Pier, but only because EMH is just so fantastic and we make full use of it and it makes for a much more relaxing couple of days at the resort. The big downside to Paradise Pier is that to get into the parks, you do have a rather long walk now going through Downtown Disney. However, on the way back to the hotel, you can absolutely enter the Grand Californian through the breezeway just between Starbucks & Anna/Elsa Boutique and then exit from the main entrance to cross the street to Paradise Pier.

We’ve stayed at the Paradise Pier once with a theme park view and the most magical part of it was being able to be in the room to watch WOC in our PJs with our full popcorn bucket. And while it was a great experience, we aren’t in a rush to book it again a) because I would rather go on more trips and stay offsite and b) if splurging for on-site would rather stay at DLH because it’s theming was magical and perfect & the magic touches from Paradise Pier was purely the theme park view.

Another choice you could potentially look into is the Howard Johnson’s. It’s comparable distance to Courtyard Marriott, might be a little cheaper and has a water park that your kids may also love if they love to swim and will be spending time at the resort.

I personally (of your options) would do the Paradise Pier & just be prepared for a little longer walk into the parks. Also, if your kids like characters the Surf’s Up bfast is a great one that is even easier to do if you are staying at the same hotel. Also, you wouldn’t be far from Goofy’s which our kids’ favorite character meal at DLH (and very close to the route you have to take to get into the parks anyway). But like I said when I started, we are hardly back at our room and often choose our hotel based on price/location and are often quite happy to sacrifice amenities at the hotel because we are literally only in the room to sleep at night and take a nap midday.

Lastly, I would also second @lmbc’s suggestion to be closer to LA for your LA day. That drive is no fun and really impedes on your vacation time. For your beach days though, Anaheim is relatively short driving distances from both Newport and Huntington beaches.

So last night at dinner I mentioned to my husband your choices and I had an epiphany. Even though yesterday I said I would go for Paradise Pier, I really feel that the extra magic of DLH is the best choice having a monorail slide, Goofy’s Kitchen, Trader Sam’s (kids can go inside before 8pm), and all the magic and fun that is at the Disneyland Hotel. Plus the fireworks headboards are just amazing in the standard room. Unlike Paradise Pier where the rooms are cute/nice but don’t really have that extra magic touch like the headboards at DLH. I didn’t mention this too much last night because I know you had said DLH was out of range for the budget and I truly do get that.

What if, you do DLH just for your 4-5 park plus hotel days and then spend your other 2-3 days somewhere closer to where you’ll be for the rest of your Cali trip? Maybe a hotel closer to LA that also has some nice ammenities for your kids to still get a good beach/hotel relaxing day and wouldn’t have you driving through too much traffic?

Anyway, it’s just a thought I had and I’ve literally done no research on any hotels in SoCal other than the ones immediately within Disneyland walking/shuttling distance, but I have a hunch that you’ll get more for your buck going away from DLR allowing you to maybe get that extra for the DLH. Which if your kids really liked all the resort touches at WDW, you’re not going to really see at Paradise Pier as much.

Either way, hope to hear back on what you end up doing and happy planning!
Let us know if you have any other questions!!!

World of Color was not running for our trip but I watched the fireworks from the pool deck. The sound is piped in. I was too jet lagged to stay in the parks. I could have seen WOC from the room.

Thank you for this suggestion. I rearranged plans to book a night in LA. It isn’t a cost savings, but it should save time.

Thank you for your recommendations. We’re now flying into LAX and staying a night in LA, then driving down to Anaheim and flying out of SNA. Still considering our Anaheim hotel options, but we’ll likely stay 2 or 3 nights at Disneyland Hotel and the remainder of the trip at the Homewood Suites by Hilton Anaheim Resort - Convention Center. I’m hoping Disney announces a promo rate, in which case we’d stay at the Disneyland Hotel for our entire Anaheim stay.

If you don’t see a promo rate & look offsite, your Homewood Suites choice is an excellent choice as it borders on the Toy Story Parking lot which has free shuttles to the park. Anyone can use them and you’ll be just adjacent to the lot (see a snip of Google maps below with Homewood Suites being the pin). So you’ll be just a quick (short) bus ride away from Homewood. 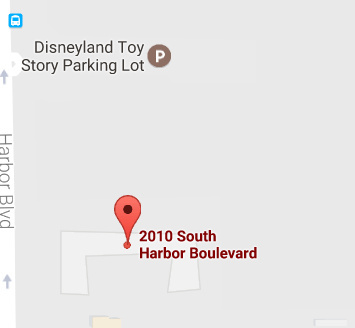 We stayed for part of our last visit at this Homewood Suites and it was very convenient. We were very happy with our decision to stay there. One note though, the Toy Story parking lot does not open early for magic morning so plan your days with that in mind.

A suggestion that is probably to late but…Legoland is only one hour to the south of DL, is a fantastic park for your kids age range, and is close to great beaches in San Diego. You could stay in Carlsbad (North San Diego county) and return home from San Diego airport. I may be biased but I like San Diego better than LA.

As far as hotels, if we don’t stay on property we stay at the Hojo (Howard Johnson). Some of my best memories are of our kids playing at the pools and the view of the Matterhorn from the room (if you get a top floor the ceiling if vaulted). We normally go to the pools multiple times and spend the afternoon at the pools before driving home (they have two separate pool areas). We have stayed at the Marriott Suites and Fairfield and they are okay. My kids are not big on character meet and greet so staying at the PP is fine for us. If you face the parks the view of DCA is pretty enjoyable. I know your young family can’t do this part yet, but my favorite thing to do is take the monorail into the park and ride Space Mountain first thing. Nothing like being whisked into the park and entering an empty Space Mountain queue.