Well, the WDW bucket list is complete - the most difficult ADR has been completed, and it was well worth the effort. I am by no means a gifted food writer or photographer, but I wanted to share it with any Liners who may be interested. If you want to read far better Liner commentaries, check out My V&A Chef's Table experience and https://wdw3919to31619.home.blog/2019/03/30/the-chefs-table-at-victoria-and-alberts-restaurant-at-wdw/

For those of you who do not know, Victoria & Albert’s has three tiers of dining: the Dining Room with 14 tables, the Queen Victoria’s Room with 4 tables, and the single Chef’s Table which is actually in the kitchen. There is a single seating at all of these areas, and they serve a Chef Degustation Tasting menu of approximately 10 courses, plus additional add-ons.

When we arrived, we were escorted through the main dining room and into the kitchen to the Chef’s Table. The most amazing thing is that everyone we encountered greeted us warmly - even chefs who were busy preparing for the evening stopped what they were doing to do this. Our two servers then introduced themselves, explained a little about what we would be experiencing, and presented us with our personalized menus for the evening: 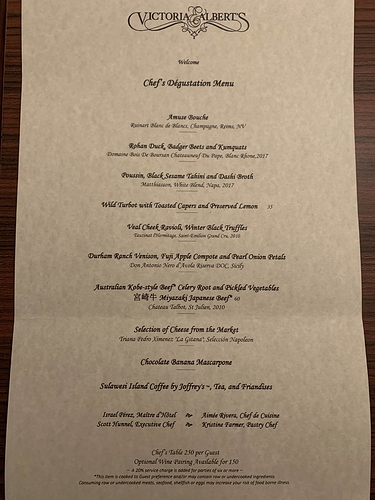 Nothing is left to chance here - we were contacted in advance about any dietary restrictions and food preferences, and as we do not like strong fish the menu for that evening that was offered to the other guests was customized for us.

First, as Head Chef Aimee was in a meeting with Executive Chef Scott, Chef Matt came over to walk us through the menu and start things off with a champagne toast. DW opted to go with the optional wine pairing (which she graciously allowed me to sip) as her upgrade, and I went with Wild Turbot and Miyazaki Japanese Beef for mine. However, our servers realized that we were going to share these upgrades, so they arranged for them to be split and plated for each of us.

Now on to the meal. Each course was fully explained to us by either the servers of the Chef involved in its preparation, and the servers also explained the wine pairings and why they were chosen to go with that course. As I wanted to stay focused on the experience I did not take any notes, so you will have to make due with photos and my sketchy recollections. 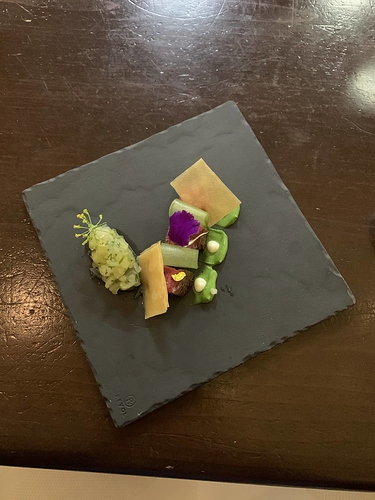 20200127_IMG_9564.JPG3024×4032 1.11 MB
Normally this is a caviar course, but for us it was swapped with bison with an herb puree and all sorts of other yummy things. Paired with another glass of the champagne toast - Ruinart Blanc de Blancs NV. 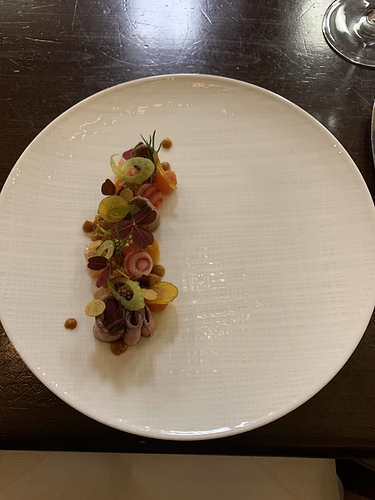 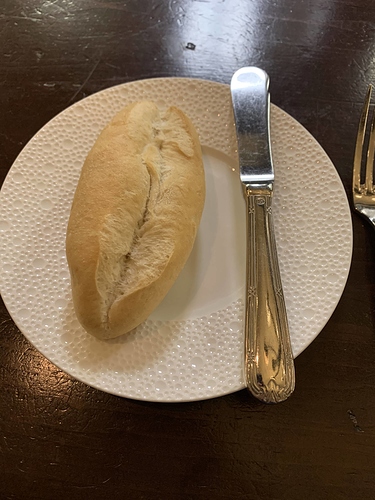 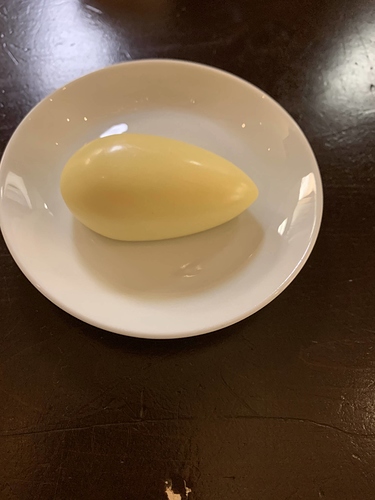 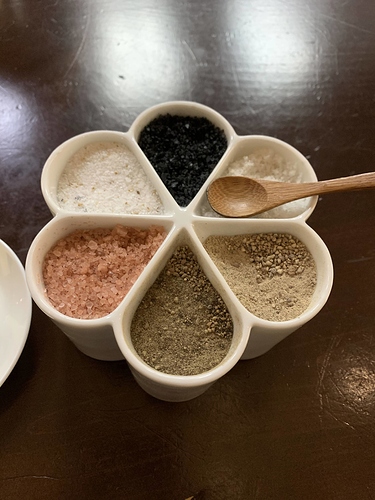 20200127_IMG_9568.JPG3024×4032 1 MB
This was a mini-baguette, served with Vermont Creamery unsalted butter and an assortment of salts and peppers. They have their own bakery on site, and to be honest I was a little disappointed in the breads as they were not particularly hot despite this. 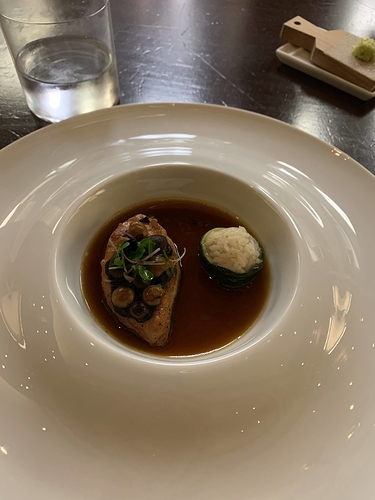 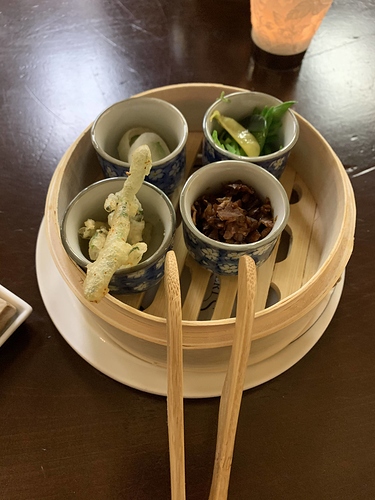 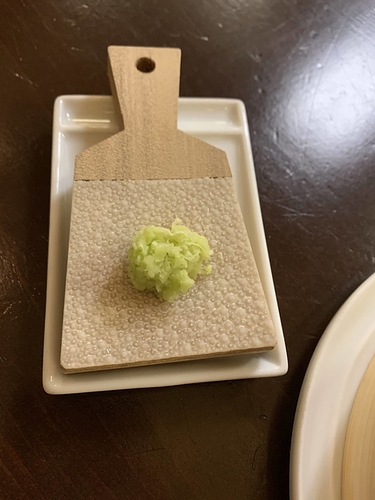 20200127_IMG_9571.JPG3024×4032 582 KB
This dish is normally prepared with salmon, but for us they substituted poussin (baby chicken). V&A likes to pull from global food themes, so this Asian-influenced dish came with tempura-fried green beans, 2 different pickled vegetables, baby snow peas, and wasabi. The wasabi was much milder than the stuff you usually get, so it imparted a nice flavor without burning your mouth off. Paired with Matthiasson White (Chardonnay) Blend 2017. 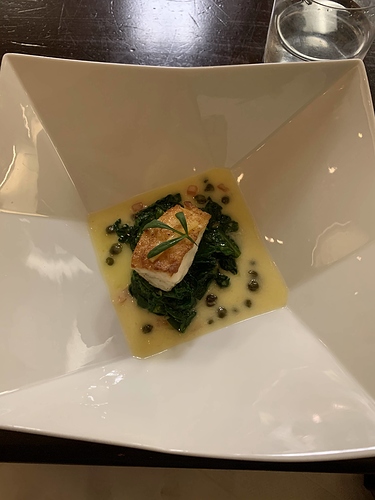 20200127_IMG_9572.JPG3024×4032 390 KB
I am normally not much of a fish person, but I would kill to have this again. The turbot is mild yet flavorful with an amazing texture, seared to perfection. The sauce, my god, the sauce - calling it buerre blanc does not do it justice. I can see why this is a V&A signature dish that is almost always on the menu as an upgrade. If you go to V&A and choose to not get this upgrade, you are dead to me. 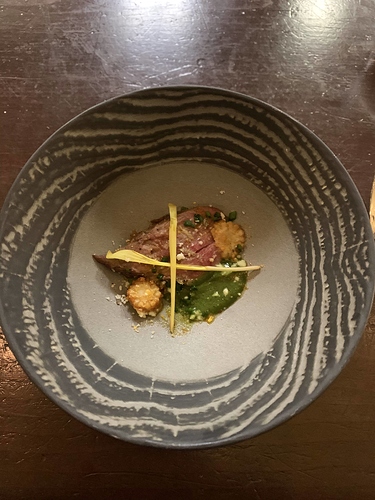 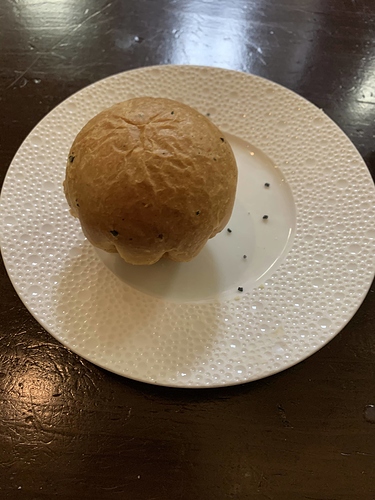 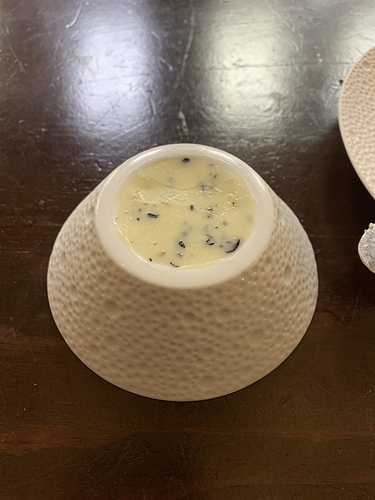 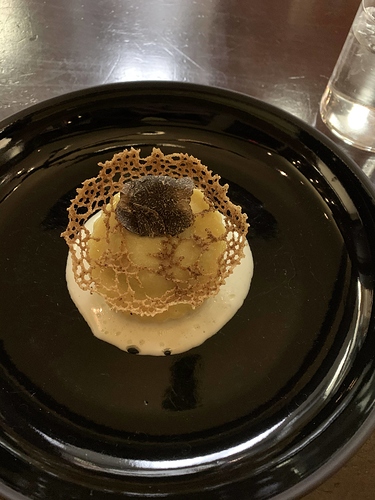 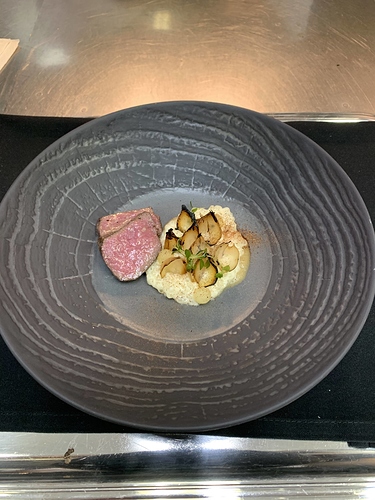 20200127_IMG_9582.JPG3024×4032 960 KB
This is not your grandpa’s venison - not a hint of gameyness at all. Tender, with a flavor and texture that was almost a cross between pork and beef. The compote is based on tapioca but prepared so that it is more like risotto. Paired with Don Antonia Nero d’Avola Riserva DOC. 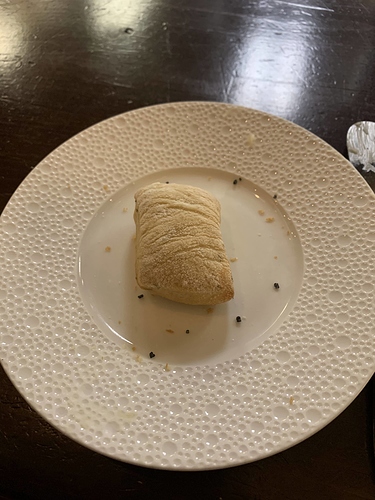 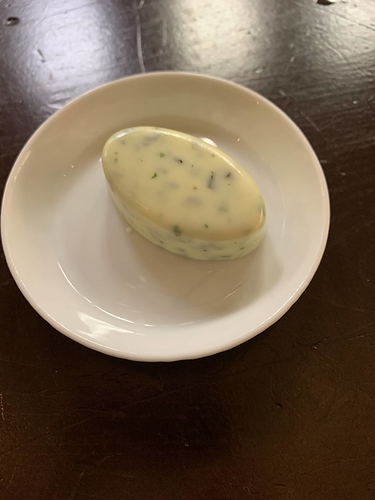 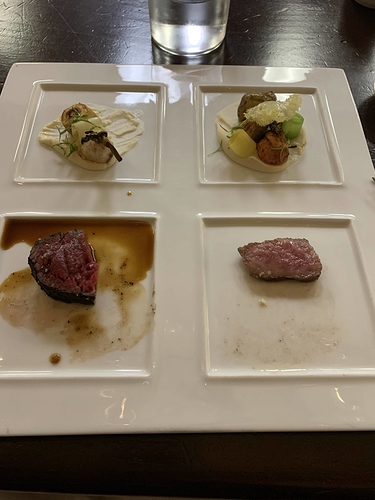 20200127_IMG_9580.JPG3024×4032 533 KB
(Ignore what appears to be poor plating here - I was so ready for this course that I forgot to take a photo before I started.) The Australian beef on the left appears to have been encrusted with black pepper, but it is actually a mushroom ash that imparts a mild but unique flavor. The Miyazaki beef has nothing on it except for a little salt, because Wagu. The only way I can think of describing Wagu beef is “beef butter” - this outstandingly tender combination of beef and fat flavors that is beyond what you experience with any USDA Prime beef. Thankfully DW had reached her limit on rich foods, so I was able to have the majority of her portion as well, which is fair because it was my upgrade after all

Paired with Chateau Talbot St Julien 2010 - tbh I don’t even remember the wine, because Wagu.

Selection of Cheese from the Market 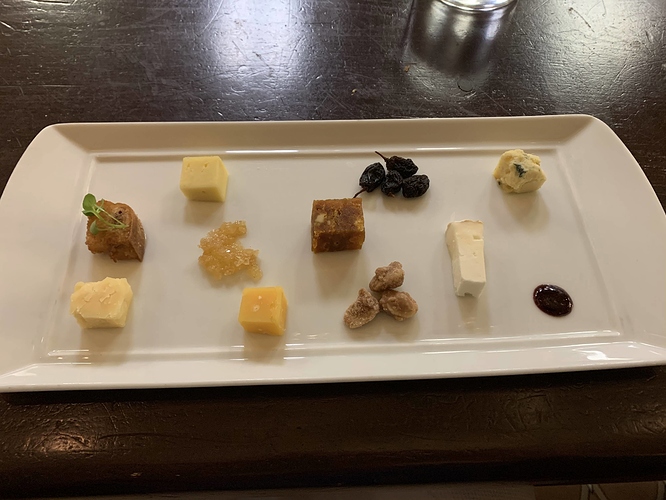 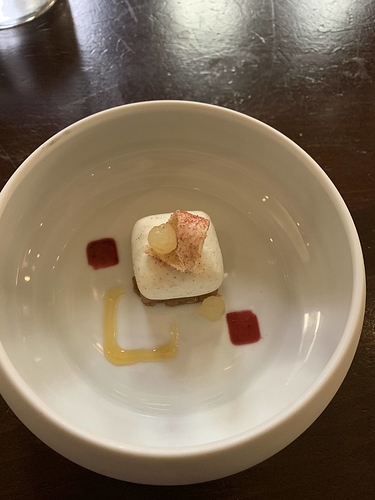 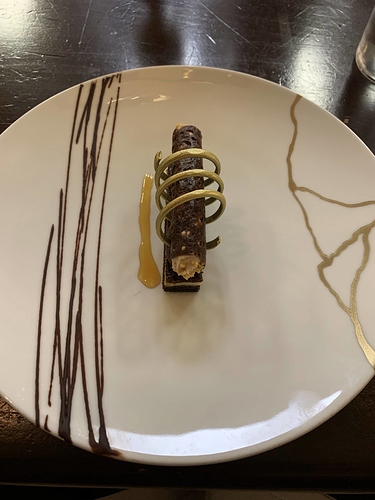 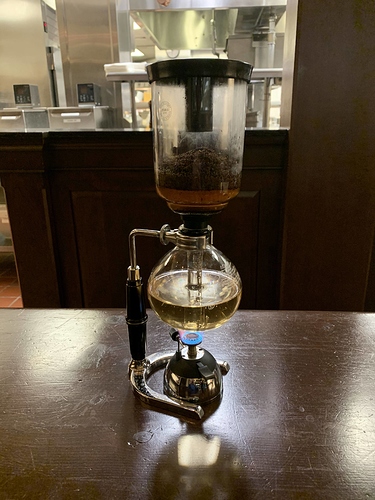 20200127_IMG_9587.JPG4032×3024 1.18 MB
20200127_IMG_9588|375x500
At this point they bring out the first of two magic boxes. This one contains an amazing assortment of chocolates for you to choose from. However, they realize that most people are beyond sated at this point, so they will make an assortment for each guest in a to-go box. All except for the chocolat-covered brandied cherries, made with cherries that marinate themselves for 18 months (there is a jar of them marinating in the room for you check out for yourself). Apparently there have been problems with guests who have them to-go, but forget that they are whole cherries, with stones. And that’s why we can’t have nice things…

The Other Magic Box 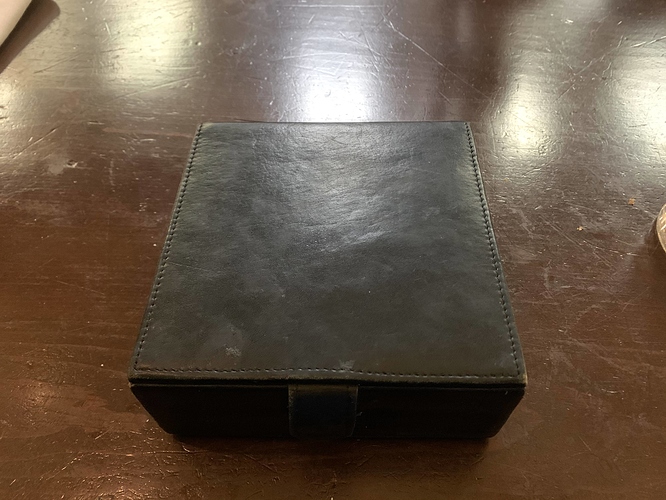 On our way out we got our souvenir menus, our to-go assortment of chocolates, a nice date-nut bread (just in case we were still hungry), and a rose for DW. And just like when we arrived, everyone we passed greeted us and thanked us for coming.

Also, towards the end of the evening Chef Aimee came around, apologized to us for not greeting us at the champagne toast, and then spent a long time discussing with us the meal, her cooking philosophy, the changes she has seen in the industry during her career, and answered any questions we had. She was extremely warm and accommodating, and I felt that she would have stayed with us and talked all night if we wanted to. One of the other chefs told us that she monitors everything coming back in to the kitchen, and it looks like something was not enjoyed and merely pushed around the plate she wants to know why and will often make a replacement course to ensure that that person has a perfect experience.

Apologies to anyone who read this before I was done - I accidentally hit ‘Post’ before I was finished, and had to go back and use ‘Edit’ to complete it.

This sounds amazing! Thanks for sharing! Will put this in my “someday” folder!!!

This sounds awesome. Very cool. Thanks for sharing!

Mmmmm…beef butter! Thanks for taking us on your culinary journey. I’m glad you got to experience the Chef’s table.

Did they serve the 100 year balsamic?

So cool! Need to try this when not traveling with three young children…it looks amazing!

Thanks for sharing. Going to V&A valentines weekend. Can’t wait was a bucket list for hubby and I. Since your post even more excited. Anyway we can decline the bread service, we do not eat bread

Have to agree w you on the bread! It all looks like store bought rolls instead of homemade. This will make me sad cause bread is my fave. Hubby and I are going in March, thanks for sharing!

Did they serve the 100 year balsamic?

No, that was not part of any of our courses. Which didn’t disappoint that much, as neither of us are that big into balsamic anyway.

Anyway we can decline the bread service, we do not eat bread

Definitely let them know this in advance, as they may arrange for something else in its place.

Thanks I did let them know. Will report back if they substituted something else. I sure hope this is worth the expense

This is beautiful. Have you been at the Chef’s Table before? I ask because you mentioned the amuse-bouche is usually caviar, but maybe that’s from studying the menu beforehand?

I don’t think I could eat all of this! It doesn’t seem like there’s a lot of food, but with the pacing it sure does fill a person up. Last time we dined like this it was French, and everything is richer and heavier, whereas this seems lighter.

Did you like the different flavors, or was the global menu a bit too varied? That would be my only concern.

Congratulations, and thank you for the great report.

Have you been at the Chef’s Table before? I ask because you mentioned the amuse-bouche is usually caviar, but maybe that’s from studying the menu beforehand?

No, this was our first time at V&A. I knew about the caviar from other trip reports.

I don’t think I could eat all of this! It doesn’t seem like there’s a lot of food, but with the pacing it sure does fill a person up. Last time we dined like this it was French, and everything is richer and heavier, whereas this seems lighter.

DW struggled towards the end as overall it was much richer than we usually eat. No problem for me as I graciously stepped in to finish what she could not.

As you noticed, because of the varied menu it was not as rich as a similar French meal that we have had, but it still was quite filling.

Did you like the different flavors, or was the global menu a bit too varied?

We really enjoyed all the different styles, and because of the pacing and presentation it wasn’t jarring as we progressed through the meal.

Thank you for your detailed reply. It sounds like this may go on our bucket list, too!