One toll pass to rule them all! No more per-day fees from rental car companies!

I’m leaving for a trip to the Keys on Friday, and I was looking around for a way to avoid having to either pay the rental car company like $29 when the tolls will be less than $9 (because they charge $4/day just for the privilege of using their transponders, and the turnpike is 100% cashless down there… even if you turn off their transponder, they tack on the fee anyway if you trigger a toll-by-plate charge) or drive an hour out of the way in each direction.

First I came up on the FL Visitor’s Toll Pass, which is a rearview mirror hanger that acts as a transponder and can be activated for up to 90 days. That’s only for those flying roundtrip through Orlando, and they charge you $10 if you forget to drop it in the box at the airport when you’re finished. It also doesn’t give the full EPass/SunPass toll discount. Still a valid option for those who don’t have 3-4 days to wait for a transponder before their trip, because you get it when you get to the Orlando airport.

When that wouldn’t work for me, I went to see if some miracle happened and they suddenly let you use an EZPass, which I already have. Well, they don’t BUT the FL EPass people have teamed up with EZPass to create Uni Pass, which is good for use in 19 states along the east coast, upper midwest, and Minnesota!

You can buy it for $15 with expedited shipping (might cost more) on Amazon (mine was delivered 3 hours after I ordered it… I work down the road from a giant new distribution center, but I’ve never gotten anything that fast, other than PrimeNow groceries when I was in NYC), and activate it with $10. You can change the vehicle info and license plate number at will, so it’s totally portable between vehicles, you just have to remember to decline and turn off rental car transponders so you don’t get billed twice. 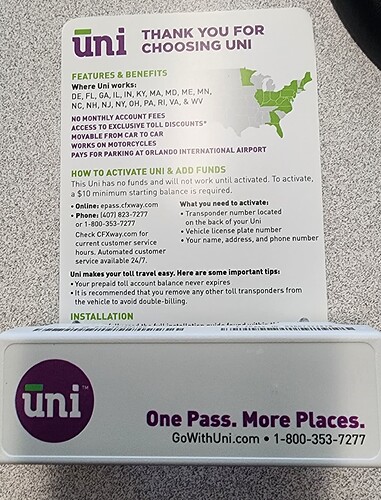 I love how most of the participating states are connected and then there’s MN like “Hey we’re here too!”

And I love the title of this thread.

I kind of thought so about SC… same in MI. Only toll here is the Mackinac Bridge.

According to the EZPass website, central Florida expressway and Florida’s turnpike sites, the EZ pass is accepted everywhere in Florida. Are the Keys an exception? 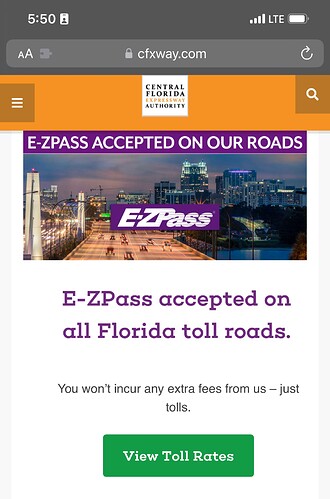 We intended to bring our I-pass (which is linked in the ezpass network) last time we went to Daytona but forgot it at home.

Fun story:
as we rolled into Orlando at like midnight in May, I had my co-pilot googling “can i use ez pass in florida.”
We could. We missed the first on-spot, but got on the second time.

one month later, we rolled into Orlando at noon. I turned to (different) co-pilot and had her google it again. I couldn’t remember one month later. We got on at the second opportunity.

When I looked on the PA EZPass site it said nothing about using it in FL, and then when I googled “can I use my ezpass on fl turnpike” yesterday it just gave me a bunch of links to the Uni Pass. Oh well, I’m okay with switching… the EZPass charges a monthly fee if you don’t use it.

We have the I(llinois)pass which had been linked with ez pass, and thankfully they don’t have a fee. We use ours regularly though so wouldn’t be too much of a concern.

I got an EZpass from NY state (live in Canada) and there are no monthly fee! It’s perfect for our infrequent trips to PA. I am bringing that one to Florida, will just put the rental car information in my account.