We’re planning a Disney cruise next spring, and considering how best to use a couple of days on the front end and back end of the cruise. The original plan was to hit Disney World; the kids had a wonderful time last year, but then I started thinking about adding Universal Studios to the mix.

I ran this by the kids, but got a mixed reaction from my 11 year old daughter who loves the Harry Potter books; she’s the reason why I thought of this in the first place. She’s concerned that Universal would be “too much” for her; she hates thrill rides. (She loved the Frozen ride at Epcot until the drop, and she freaked out on Pirates of the Caribbean.) Digging into the list of Universal attractions, I see that many of the Potter attractions are roller coasters…and she has no interest in any coasters. Even kiddie coasters freak her out.

My initial response to my daughter’s feedback was to scale back to a 1 day/2 park trip for Universal, staying onsite (probably Hard Rock) to get the express benefits…then spending another day at a Disney park. (The cruise is Monday-Friday on the Dream, so we potentially have Saturday/Sunday/Monday morning pre-cruise and most of Friday/all day Saturday/Sunday morning post-cruise available for parks.) But digging into it further, I’m questioning whether she’d actually enjoy much of anything other than riding the Hogwarts Express, the wand show and Hogsmeade.

I also have an 8 year old daredevil son who’ll ride anything and everything; no doubt in my mind he’d love Universal…perhaps even more than Disney. My worst fear is that my daughter will hate Universal and my son will hate that we only spent a day at Universal.

Should I just punt the whole Universal idea and just stick with Disney because I know everybody will be happy? Or roll the dice, plow through the hotel changing to do both and hope for the best?

I see that many of the Potter attractions are roller coasters

Actually, only one of the Harry Potter attractions is a roller coaster, and it is a kiddie coaster.

I’d say your daughter has to “buck up”, but then if I did say that, my wife would punch me in the arm and say, “Hey…be nice.” So, I won’t say that!

But if your daughter is as sketchy with rides as you suggest, then Universal might not be the best choice overall. Most of the rides in both parks are motion simulator style rides that can FEEL very intense even if they aren’t. You might end up having to avoid most things as a result. Your 8 year old sounds like my 8 year old and will ride almost anything he’s allowed to. But for your daughter’s sake, I’d suggest Disney…especially considering you already know they already like DIsney. Save Universal for a future trip when they are older.

Based on what you have said, I agree that Hogwarts Express is the only HP ride your daughter could handle. However, the theming in the areas is so incredible, if she is an HP fan, she will love it all the same. There is only one ride in Diagon Alley, yet I literally spent six hours there one trip. I visited Ollivanders and got a wand, cast spells, watched the shows, lingered in every single shop, drank butterbeer, ate at the Leaky Cauldron, talked to the snake, etc., etc. She will love the areas even if she never sets foot on a ride. And then she still has Hogsmeade…

It would almost be a cruelty not to take your daughter to Harry Potter — the rides (all of which are technically rollercoasters, and all of which are pretty intense) are only a part of the experience and, in my view, they’re not even the best part. There is so much to see and do.

You can explore the castle without going on the ride — there’s a specific (self-guided) tour you can take to do this. And they’ll let you inside Gringott’s bank to look at the banking hall (which is amazing) without going on the ride, or being anywhere near it. Just explain what you want to do. (I did this in order to get photos. I’d been on the VIP tour, which skips the line entirely, so I hadn’t seen the banking hall.)

Are there two parents/adults on this trip? Would you be willing to split up? In terms of rides, I think Universal is much better than WDW — some of them are mind-blowing (and really intense). Provided your son satisfies the height requirements, he could be having a total thrill day, while your daughter gets (metaphorically) lost in the immersion of the WWOHP.

Mom and Dad will absolutely split up with the kids, because each has their own interests. (Though there will be some rides my son will have to ride solo because Mom & Dad don’t have the stomach for rides like Space Mountain and Expedition Everest.)

Some good advice here for my wife and I to discuss. I may show my daughter a few of the other shows and simpler rides at Universal, and let her give us some feedback. (I suspect that if I asked my son, he might want to skip Disney altogether and do all Universal…)

Can I ask what your daughter does enjoy about Disney? You’ve said what she doesn’t like but my advice would be focus on what she does. If it is the general theming, the detail and the atmosphere then the HP bits of Universal would be brilliant in my view.

As others have said she can spend ages at the shows, the shops, Ollivanders, getting an interactive wand and spell casting, the food etc. And she shouldn’t feel out of place or looked down on for not doing the bigger rides as the area is literally full of similar minded HP fans doing the same. Then hop on the train and go to Hogsmeade and live that part of the story as well…

If she does love rides, but the gentler kind, then Universal is not so great. Some of the Suess Landing rides are OK but most of Universal in ride terms is thrill led. For the slightly less brave (those that grow up like me to look at the big rollercoasters and think “why?”) then I think Magic Kingdom is the way to go.

Your son will no doubt love either!

I shan’t rest until you’ve committed to taking your daughter to the WWOHP!

So I’ll just put these pictures here. You know, for inspiration 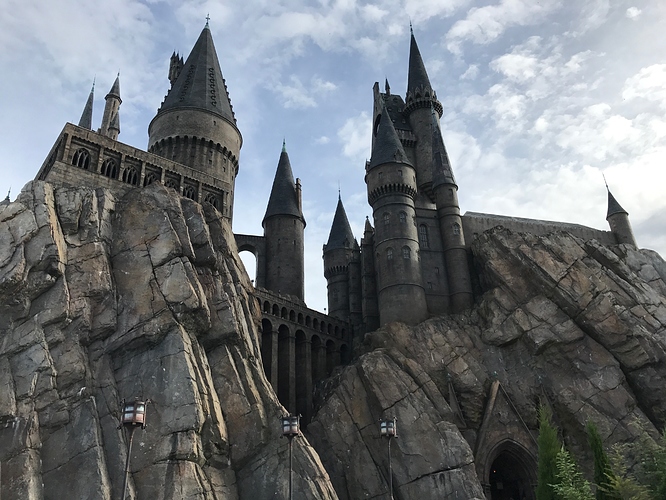 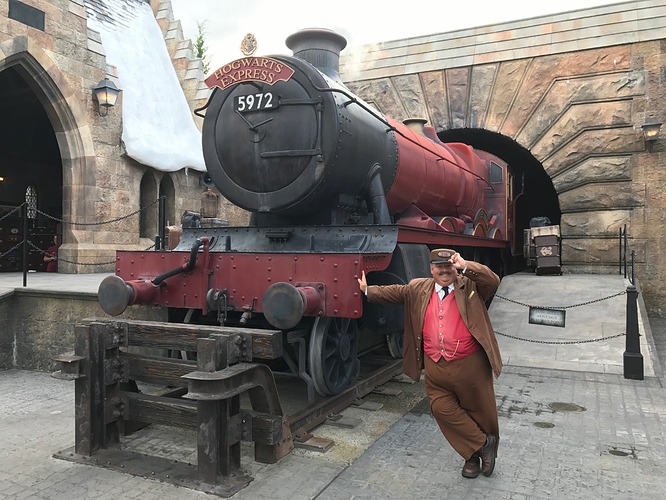 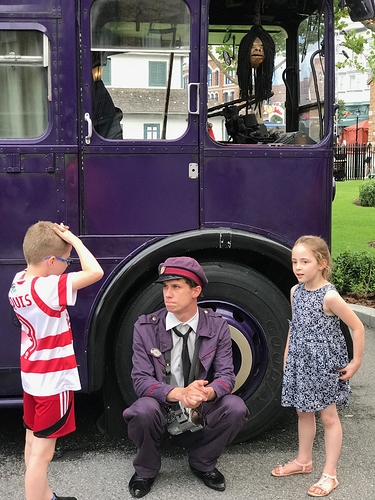 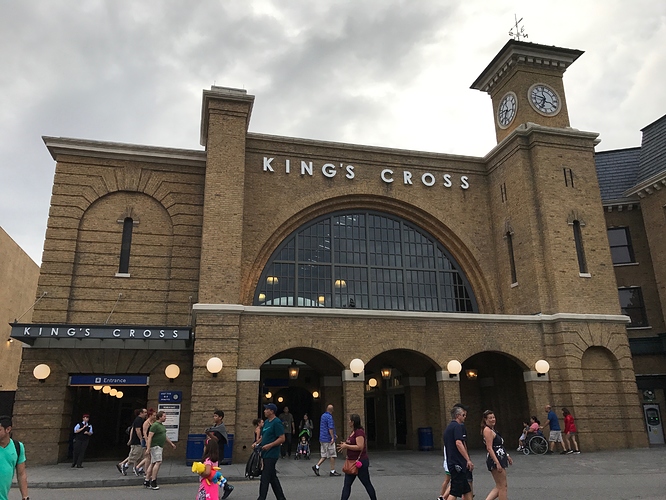 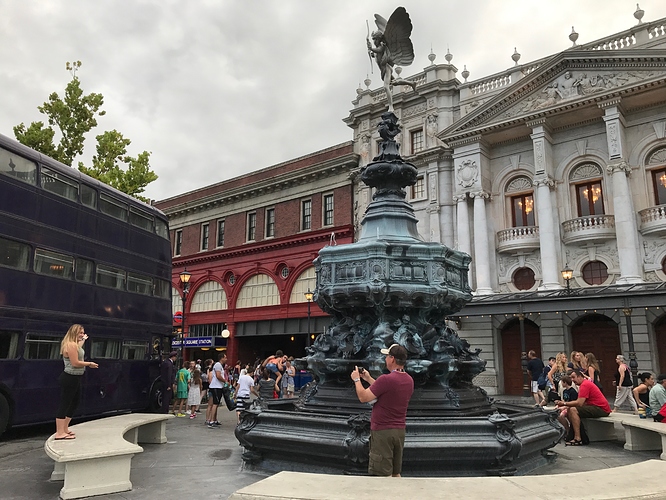 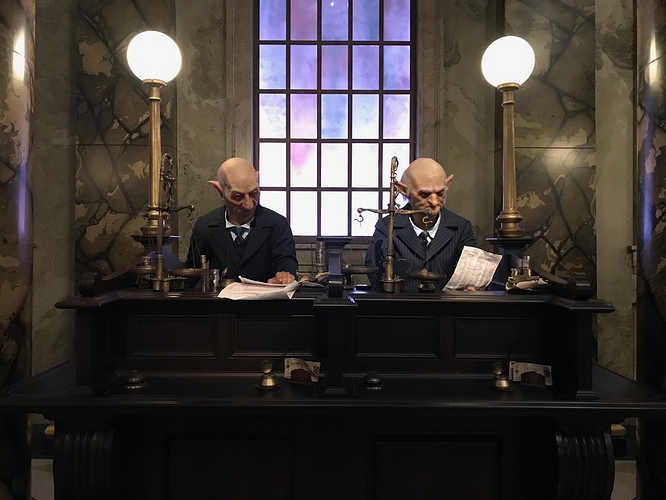 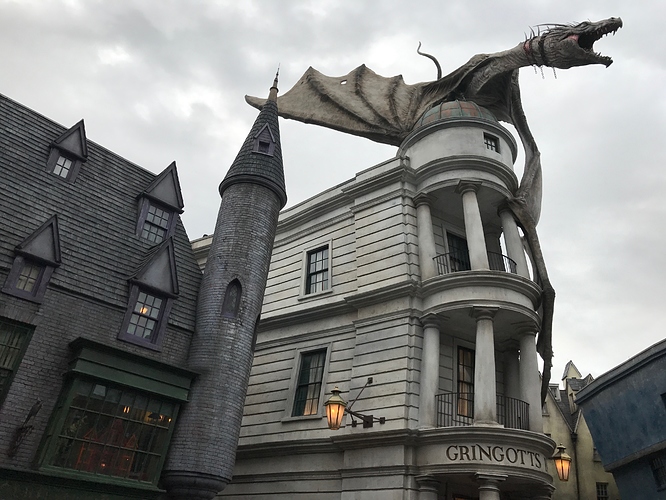 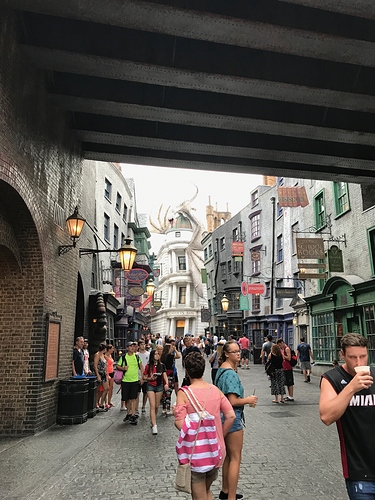 One thing to keep in mind about Universal is that a lot of the thrilling rides have height restrictions. How tall is your 8 year old? When my daughters were 8, they weren’t tall enough for most of the coasters at Universal. Many of the rides need you to be taller than any of the rides at Disney.

My son has been riding 48" rides at an amusement park for a couple of years now; I think he’s close to 52". I figure in a year, he’ll pass all height restrictions that I see on Wikipedia.

My daughter favors the tamer rides; she loved Buzz Lightyear and Toy Story Midway Mania. (Unfortunately, she also liked Small World.) Her other favorites were Mad Tea Party and the Regal Carousel. I keep hoping she’ll try some other rides at our local park, but I know not to push too hard. Last summer, we finally got her on the Ferris Wheel, where she finally realized was actually fun. (We spent over a year trying to get her on, and now we can’t get her off…)

I’m not sure that’s true. For my son, there were exactly THREE rides he wasn’t tall enough for: Rip Ride Rocket, Dr. Doom’s Fearfall, and Hulk. He could do everything else. (Admittedly, he had WISHED he could ride Rip Ride Rocket and Hulk.)

But it is true that Disney does a better job of making the rides accessible for young kids. Expedition Everest, for example, is a prime example of creating a world-class roller coaster that almost everyone can ride.

@profmatt has done a good job trying to convince you to do WWOHP. And while we’re glad we did it, the truth is, my entire family was unanimous in preferring Disney to Universal. Two parents, 5 kids with a spread of 11 years. Do Universal once if you can. Do Disney over and over.

No way!!! Do them BOTH over and over!

As long as the parents are willing to split up, I think you can have an amazing trip for the entire family. Your daughter will absolutely love the Harry Potter areas and will more than likely enjoy the Hogwarts Express, Men in Black, and the Seuss Landing rides. Your son can enjoy almost everything in the park. I think it is definitely worth doing once, even if just for a day, to get a taste of it. You may find everyone truly enjoys it and wants to come back again.

No way!!! Do them BOTH over and over!

Well, we did Universal once and said it was enough. No need to return. But then they built Diagon Alley. So we went back. We enjoyed it. Then we said, no need to go back.

BUT, I’m now rethinking my initial stance. I realized that this was a 1 or 2 day visit. Universal can easily be done in 1 or 2 days. Disney just can’t be done in that time unless you limit yourself to one or two parks at most.

So, that puts Universal back on the table.

Disney just can’t be done in that time unless you limit yourself to one or two parks at most.

This is my problem exactly. We only get to Disney about once every 5 years because I feel like unless I can go for at least a week, it’s going to be entirely too stressful and not worth the trip. Universal, on the other hand, is much more relaxing for me, thanks to EP, and can be done in fewer days. And I just plain love them both!

Frankly, even if you are going for a week at Disney, you aren’t going to be able to see/do everything. The one thing I learned from our last visit is that you can’t do everything, and frankly, you don’t want to do everything. We did a lot of things that people say you should do, but we started pulling back and doing things we enjoyed more. (I lost count of the number of times we did Buzz Lightyear’s Space Ranger Spin…)

If we only have 3 days for Disney, we’ll limit ourselves to Hollywood Studios and Magic Kingdom. My wife and I are discussing the Universal idea; I’m warming up to the notion that between some of the tamer attractions and Harry Potter, my daughter will have a good time.

Update. We talked it over with my daughter this weekend, and discussed the one day idea, and she decided to go for it. So now I need to figure out which hotel at Universal to book. I’m leaning Hard Rock and the kids suites, but not sure how to find the best price. (Fortunately, I have time.)

My son overheard the whole conversation, and just to be difficult, yelled that he wants no Disney and all Universal.

I think we’ll finish the trip at Universal, and spend the partial day after the cruise at Disney, before heading to Universal for the night. We’ll do a DVC rental for 2-3 days before the cruise for the front end.

Ending at Universal is a great idea, as with EP, you can be much more relaxed. I’m glad DD is onboard! She will love it!

Do Universal once if you can. Do Disney over and over.

Funny, I feel exactly the opposite.