because of the way they portrayed Luke

My take is that if you grew up loving young Luke and imagining what grown-up Luke would be like, you probably had this image of him that was sure to be shattered. And that was very intentional on the filmmakers’ part. But as you say he came back and kicked a** at the end so I really loved him having an actual arc instead of being a wooden guru with nothing to do.

I agree the Canto Bight stuff is the weakest part of the movie, but I was so focused on Rey/Kylo/Luke that I didn’t have time to care about the minor quibbles I had. I came out of the theater completely satisfied. It was crazy for me to see all the “discourse” in the fandom afterward.

Just came into the LR and DH is watching EP 8! I had to act all disgusted. It is the scene with Rey and the mirror… so good

I love that scene!!

because of the way they portrayed Luke.

For God’s sake all I keep reading here is how whiny he is! I thought he was true to character. And I loved his scenes near the end of the movie.

I’m going to go out on a limb here and say this isn’t because of the shirtless Kylo scenes (knowing your hatred of shirtless men of course).

No. I very much liked it when Rey asked him to put something on.

For God’s sake all I keep reading here is how whiny he is! I thought he was true to character. And I loved his scenes near the end of the movie.

I think many perceived him as some sort of a superhero following ep6. Now he was fragile and broken. Of course it’s more complicated than that. There were a lot of small things I didn’t like in the writing of 8, but @Jeff_AZ put it well - I too walked out of the theater satisfied.

I very much liked it when Rey asked him to put something on.

I had grown up watching the unedited version as we had it on VHS and would watch it there and when it would come on TV. I counted myself as pretty familiar with it tbh. I had seen one revision where Lucas “added color” to the sabers and “touched it up a bit”. Nothing after.

What I saw last night was off-putting. What on Earth did they do to that poor movie? The ships had little yellow boxes around them so that they could darken the surrounding sky? The blaster beams were super imposed? Even my kid was making fun of it. And he’s normally not that kid.

Not to mention “I shot first” and whatever that Jabba scene was. For the first time ever, I was disappointed. If anyone see’s the original streamed anywhere…let me know, please. I don’t think I can get my kid to do it again, but at least I can clear it from my mind.

I have the one from the 90’s on DVD. Maybe I’ll talk the boys into watching that instead of whatever version they have on Disney+

The ships had little yellow boxes around them so that they could darken the surrounding sky?

They did? I don’t recall that at all.

I could have been the angle I was in front of the TV, all the way to the left edge, with the chair pointed at the middle of the screen.

Pale yellow boxes, just slightly bigger than the midsize ships that were in them, and at the end of the boxes, the sky turned jet black with the stars. It’s clearly how they “remastered” it. I’ll see if I can get a picture of it.

Were you watching this version?

Pale yellow boxes, just slightly bigger than the midsize ships that were in them

This effect is actually worse in the older versions of the film. It has to do with compositing the various components of each shot together - after all, Lucas was not able to shoot TIE fighters in front of actual space.

The special editions and beyond have cleaned it up a little, but it’s still visible in A New Hope, especially if you’re watching on a high contrast HDTV. If you were used to watching on a CRTV you probably didn’t notice.

This is what I was going to say. The little boxes around the ships were awful in the original recordings. They were cleaned up extensively for the special rerelease editions. I am surprised you didn’t notice them earlier. I have been bothered by those boxes since the early 80s.

still visible in A New Hope, especially if you’re watching on a high contrast HDTV

Indeed. Pretty obvious on my OLED, but I try to cut Lucas some slack and realize how hard some of those scenes are to portray. 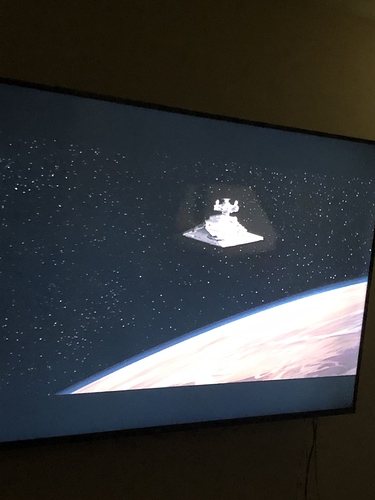 The blaster beam reminded me of someone with a red sharpie literally just trying to frame by frame paint by numbers. Like here 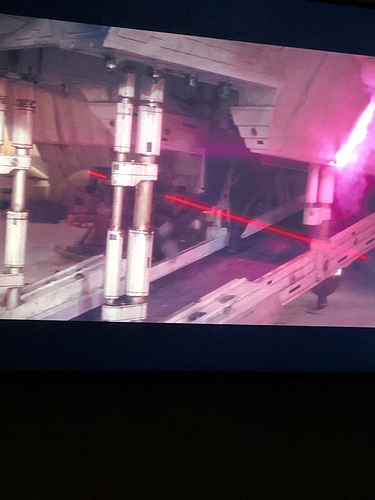 Mostly through just the first half of the movie by the second half it was only red planets and rocket fire (probably on purpose for the fire “glare”). Here, by the end, it’s fine. 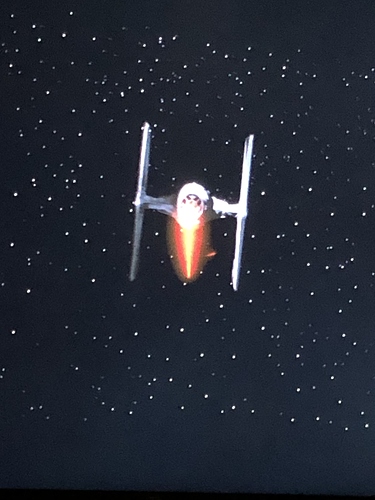 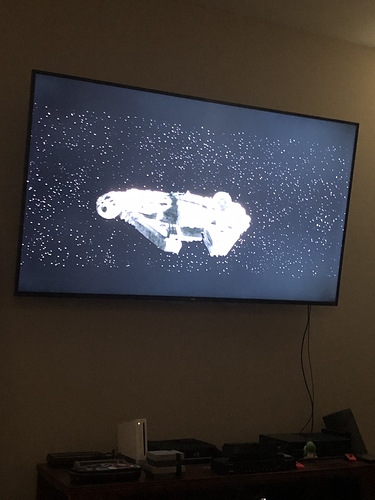 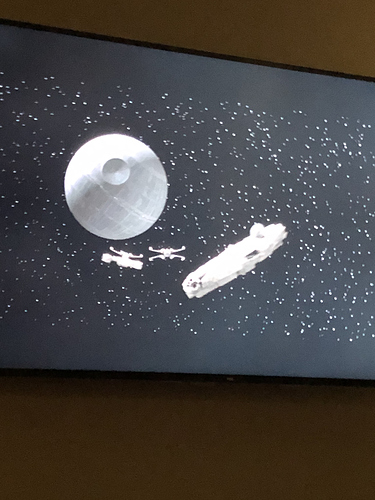 The technique for adding lasers and sabers is called rotoscoping. And it literally is painting frame by frame to get the effect. Today rotoscoping can be done digitally, and even somewhat automated. But back in the day, the lasers were effectively drawn by hand, frame by frame.

Before I was on a DLP projection big fat tv where none of this was really noticeable.

We did just upgrade Super Bowl of last year to a 4K resolution tv. That other TV lasted 15 years. I give this one 4, 5 years tops.

But back in the day, the lasers were effectively drawn by hand, frame by frame.

Yep, sort of photoshopping before photoshop in a way.