No CRT for us?

When I originally started booking ADRs I felt elated when I got one for CRT. But was only able to get table for 4, so I thought that the girls (grandmas, myself, and DD6) could go to CRT and boys could go to LT. However, my DS10 was, much to my surprise, a little disappointed that he wasn’t going into the castle too. I then came up with a plan for him and DD to go with grandmas while myself, DH, and DS12 go to LT. While talking about all of this, DS10 said that he would actually be most excited for BOG and not CRT. We have ADR for BOG for presumed PPO that has now turned into an after park opening meal due to time change of MK opening. So I have been almost wishing we didn’t have this ADR any longer… the plot thickens… I just got by chance a lunch for BOG on the day we are booked for the late lunch CRT. I think I will cancel CRT and just have us all be able to eat together at BOG! DD keeps telling me that she will refuse to meet any princesses in person (she had met them at Disneyland 3 years ago) so that has been a worry about going to CRT! I think I am the one who was most excited about CRT but now that I look at the expense and read the poor reviews on the food, I think this is probably a good choice anyway? BOG food may not be superb but I will not be paying $70 per plate. I guess I am wondering if everyone out there thinks this is crazy to give up CRT adr?

I don’t think you are crazy to consider giving up the CRT ADR. We opted not to do it on our 1st trip last year and we aren’t planning to do it for our upcoming trip. We are a family of 5 and I just can’t justify the expense either in out-of-pocket cost or 2 dining credits.

CRT was an expensive disappointment for me. It’s a production line experience — we were in and out in under an hour. The starter was a disgrace — a wholly unimpressive salad. The entree was fine. The dessert disappointing. We did get visited by five (?) princesses, though I found all that rather weird. But I’m 48 and not into princesses. We were given some tacky, plastic souvenirs.

I wouldn’t go again. But I’m a grown-up.

BOG was disappointing, too. We were seated in the least interesting room, which was half-empty and had no atmosphere. The food was also poor. I had the “signature” dish — shrimp and scallops in a very watery sauce. But I enjoyed meeting Beast and it was interesting to wander around the other rooms.

I was a great sucker for expensive extras during my trip. Most of them I wouldn’t do again.

The forced permanent smiles on the princesses faces are just odd. I honestly think she’s saying “I’m a captive here. Please send help.” Look at the desperation in her eyes. 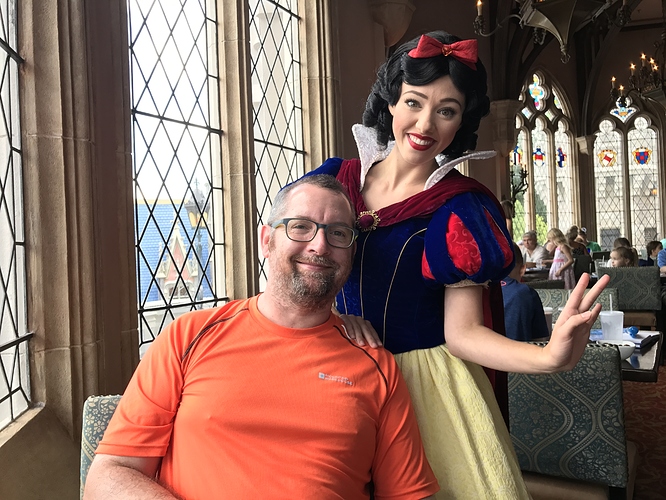 I think you are more crazy to have booked it knowing that your DD didn’t want to meet the princesses - no offence meant but that is one ridiculously expensive meal and I’d only do it if I had a kid desperate to meet them, and even then I’d probably just do m&g.

Yes, now that I have come full circle on this one I realize I was crazy! Part of the learning process was that when it comes to Disney surprises with kids (at least mine) they don’t work as you would have expected. I thought my DD would have loved the whole meeting princesses as she still wants to wear her princess dress and would have loved BBB if I could have gotten an appointment, but no to meeting them! And then DS was originally wanted to be the one to go CRT! (being inside the castle does sound cool) I had a hard time letting it go because I know I am the one that really wanted to go! I also have been becoming blind to the Disney pricing. When I first started looking at things I thought that is crazy expensive but then as it all became normalized to me I changed to becoming desperate to sign up! I think I am now coming down off that state of mind luckily before we actually arrive next week.

Thanks for the feedback. I read all of your trip reports and loved them! We will keep BOG because we just have to go into a castle while we are there. And DS10 is really excited for this one. I think I have fallen into the expensive extras trap. You chimed in on a previous post of mine asking if dessert parties are worth it. We are doing one for HEA and star wars at HS (I think you didn’t like this one but my DS are over the top for star wars). We are also doing MNSSHP. I signed us up for this early in the planning process and can’t back out now (kids are very excited for it) but wish I hadn’t paid the price or did it on a non-park day. We had a 5 day pass though and are only there 5 days so are kind of paying double for one day! This maybe our only trip to WDW though so I do have the let’s try it at least once mentality!

I think everyone goes a bit mad when it comes to Disney! I think you’ll all enjoy BOG.

There are very few things at WDW that I consider “overrated”. CRT is one of them. I thought it would blow DD7 away, but after doing it once she couldn’t care less if we ever go back. Not because of the money (what does a seven year old know of money?), but because the experience itself is blah.

We plan on doing CRT in a few weeks, mostly as a Disney Bucket List item. I’m aware we’re paying too much for what we are going to get. ¯\(ツ)/¯

I ate in the castle years ago when it was King Stephan’s Banquet Hall. It was enjoyable, and I would gladly repeat that experience again. But since it has been turned into a Princess stable with crazy prices and mediocre food, the ONLY reason I would even consider going was if there was a young girl in the party who just absolutely had to meet the Princesses.