My nightmare trip, with a few high points

I feel like this trip was doomed from the start. Two weeks before, DS10 had pneumonia and missed a week of school. Two days before, I badly sprained my big toe and was supposed to be non-weight bearing 5-7 days (I did one). This gross picture was my toe the night before we left. 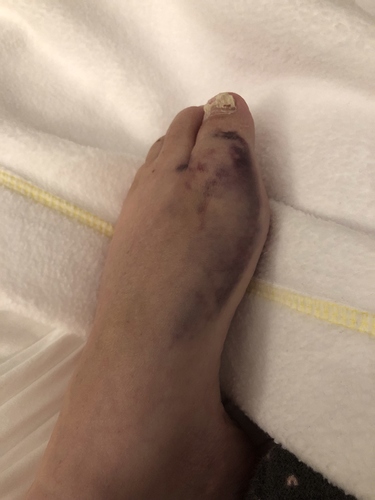 That’s just not right. Travel day, we were supposed to fly our at 1:10pm and arrive at 4:30, plenty of time to catch the Magical Express and get to our resort and catch a ride to Magic Kingdom for dinner and Disney After Hours. Well, according to the news, Southwest was caught up in a big battle with their mechanical staff which cancelled and delayed flights all over the US and unfortunately was one of those delayed. Started with just 20 minutes that became longer and longer and longer. I sensed Disney After Hours slipping away. Finally I threw a Hail Mary and called Minnie Vans to meet us at baggage claim and rush us to AKL. The Minnie Van driver, Kelly was a sight for sore eyes. She loaded us up and took us to Animal Kingdom Lodge. When she heard the ordeal, she offered to stay while we dropped our carryons and take us right to the Magic Kingdom. While we didn’t end up going (it was now after 9pm and the whole day took its toll on DS) the offer was enough to bring tears to my eyes and really turn around the start of our trip. I thought we were in the clear. I walked down to Sanaa to get some bread service to go for dinner.

Next day went alright. Epcot in the morning, lunch at Le Cellier then back to the resort for swimming. We headed to Animal Kingdom for the FOP SDFP I snagged at the 3:01 drop and did dinner at Rainforest (the boys picks). We ended the day with the Tree of Life Awakenings which I had never seen and went to bed happy.

Saturday was fishing. We caught the boat from POR so we could head to Disney Springs for lunch after it. Fishing was fun. We caught enough to be happy (around 15 total). The guide was fun and we all had a good time. 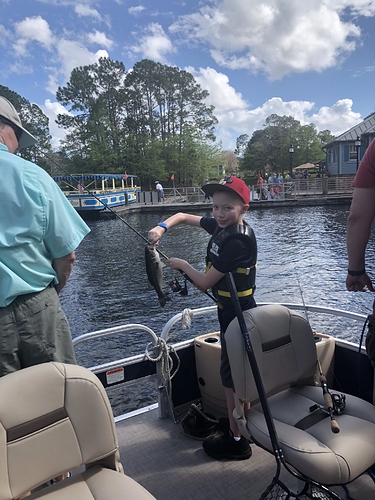 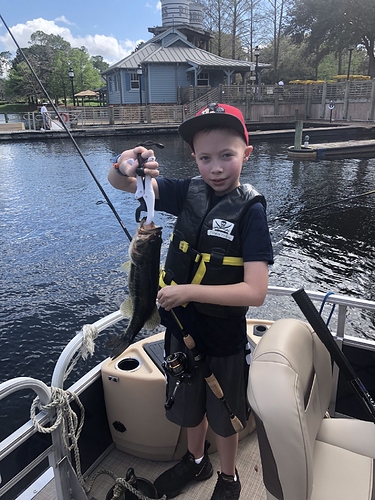 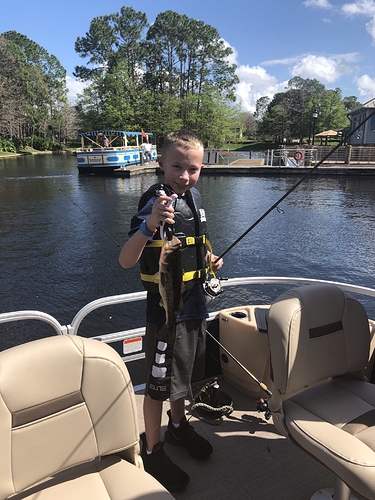 A0A75F37-A9CA-4623-9049-2B2C8D9E0CFF.jpeg1536×2048 840 KB
Here the rest of the trip heads downhill. We caught the boat to Disney Springs for lunch at Maria and Enzos because they were running a 40% off discount for Passholder. Were seated in good time and then waited an hour for our salads as tables around us received appetizers and entrees. All the while, I start feeling worse and worse. I finally have to bail on DS and DH and catch a bus back to the resort. I rest the rest of the day. The restaurant gave us the meal for free it was so bad. DH just left a tip.

I made it to AK today for Primevil Hurl, FOP and KS (DH finally talked me into a wheelchair). Lunch, then I took DS To the pool because I felt like I was ruining the entire trip. I have a sneaky suspicion I have DS’s pneumonia. Same symptoms. Just need to make it through tonight and get home tomorrow. I had to cancel EMM at HS tomorrow because I just can’t do it. I told DS we would get a big breakfast in the room and I have FPP for RNRRC, TOT and SDD. He was really good about it, but I feel awful. Only thing making it better is that I have it booked for our next trip in May that is a surprise.

So, that is my tale of woe. Minnie Van shuttle to the airport, expensive but awesome. Fishing was really great and I would do it again. Chest X-ray to come on Tuesday.

I’m so sorry, I hope you get well soon.

I am so sorry! I had pneumonia last month and I know how awful I felt - being a Disney must make it twice as tough.
I hope you make it home safely and heal quickly.

Oh dear . This is so sad. I hope that you wake up feeling better tomorrow.

Good luck on the pneumonia- I got diagnosed the day after Xmas - just got my final all clear X-ray this past Friday. It’s a long road. Hope u feel better soon!

What a hard bunch of days you’ve had. I. So sorry this trip has not gone better for you all.

I am so sorry! I hope you are soon on the mend!

Sorry to hear it hasn’t been the trip you planned but sounds like you’ve made the best of it! Hope you start feeling better soon!!

Oh I am so sorry

I hope that the flight isn’t too uncomfortable for you. Home and bed must sound very inviting.

Oh my! You’re doing the right thing. Sometimes you just have to call it and go take care of yourself. Glad you have May to look forward to.

I am so sorry! I hope the doctor will help!

Sorry to hear it wasn’t the best trip, hope you are on the mend now

Totally the right decision. Chest X-ray confirmed pneumonia. My bed and dog are calling me…along with the meds.

Sorry to hear about your trip, glad you are back home in your own bed! Feel better soon.

So sorry that you had these problems. I do hope that you get well.

I hope the meds make you feel better soon!

Such a bummer. Sorry to hear. I remember having a fever as I kid when I was at WDW with my family in the mid-80s … they went to the parks and I couldn’t get out of bed

I am so sorry about your trip. It really does suck when life gets in the way of those magical moments. You have now had a bad trip, so therefore all other trips will be magical. Feel Better! Take care of yourself! Sending you pixie dust to heal your lungs!