*** otherwise known as “the trip where All my obsessive 5 months of planning went down the drain and I had to re-book all FP’s and most of my ADR’s while in the park and it could have been a disaster but we still had an amazing time”.

I don’t know if you liners remember, but I was the one that wrote the post about being annoyed on my FPP day because my husband asked me to drive him to the bus stop at 6:55 on my FPP morning. I didn’t even have time to put my pants on because I wanted to hurry back and not miss my FPP window. So you can see that I am that serious about planning. I had all my FPP’s booked for FOP, Na’vi River, 7DMT (for 2 different days). I had all my holy grail ADR’s planned months ahead, and constantly reviewed touring plans in my sleep.

So what happened when one day of bad weather derailed my touring plans, causing me to re-arrange all my ADR’s and cancelling all of my beloved FP’s for the week in favour of developing new touring plans, most times the night or morning before?

Did we still get to go on all the holy grail rides? Were we able to get reservations at California grill (perfectly timed for the fireworks) and have a CM use his Disney magic to get us BOG lunch in moment’s notice?

And most importantly, did our story have a happy ending? ( Corny I know, but couldn’t help myself- now you know what type of trip report you’re getting yourself into?)

I can’t wait to share our trip with you. Stay tuned!

I am looking forward to your report!

I don’t know if you liners remember, but I was the one that wrote the post about being annoyed on my FPP day because my husband asked me to drive him to the bus stop at 6:55 on my FPP morning.

I totally remember that post, and totally understood how you felt!

I need to know what happened immediately!

This is gonna be a good one. I can feel it!

VAlright guys, you ask, and now, you shall receive…

So after all my neurotic planning, we were finally headed to DISNEY WORLD!! It was our first time travelling as a family of 5 (plus my parents). This was going to be DD4’s first trip on a plane and her 1st trip to Disney so we were eager to see how she handled being on her first flight. Since we were coming from Toronto (eh?) the flight to MCO was only 2 hours and 40 minutes so the plan was to land around 5:30 pm and allow about 90 minutes for airport/MDE time to get us to our hotel, then take the monorail to the Contemporary to Chef Mickey’s for our 7:50 ADR.

We boarded discount airliner Air Canada Rouge at around 2:00 pm and headed out on time into the friendly skies. Our trip was off to a great start as the flight attendant found out that it was DD4’s first flight and gave her a bag of goodies and announced it on the PA. As soon as we landed we happily boarded the Magical Express, and then were transported off to our home for the rest of the week, the Grand Floridian.

When we arrived at the resort, i am not exaggerating when I say that it is one of the most beautiful resorts that I have ever been to. On previous trips, we had stayed at Caribbean resort and POFQ 6 years ago (amazing. FYI) but GF was a bucket list item for my dad and since my parents are not able to travel much longer due to health reasons, we decided to take the splurge. We booked two rooms and I used the TP room reservation feature to request a Magic Kingdom room in Boca Chica (one of the outer buildings). I wasn’t expecting to get a room with a view, so imagine my surprise when I looked out of my balcony and got this view (omg, omg, omg) 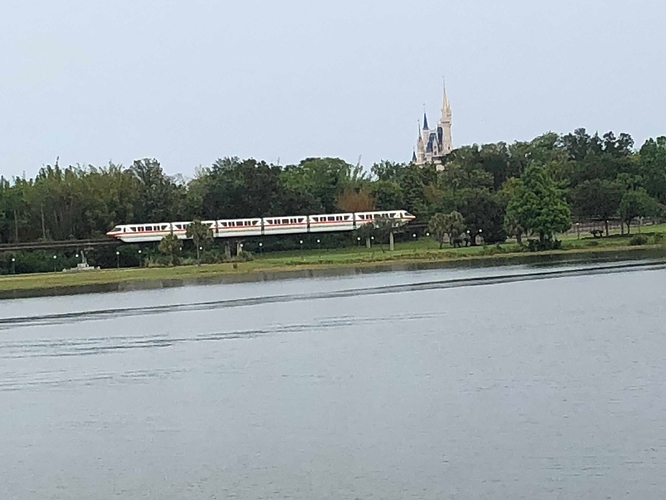 And then at night (quick somebody pinch me I’m dreaming)… 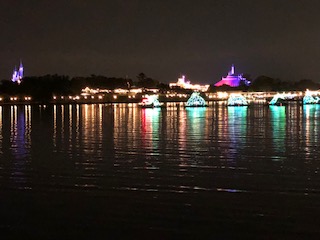 The room is 8121 in Boca Chica, which was in a central location and was a pretty quiet building, except that you could hear the horns from the resort launchers later at night and in the morning starting at 7am since we were right on the lagoon. Housekeeping was great and there was a choice of 3 pools that you could choose from that were open to 11pm. The lobby itself is just worth visiting the GF for, and my only complaint (if I were to really search hard for one) is that the resort is so pretty that at times we felt guilty for being at the parks and wondered if we should be spending time at the resort instead lol. I found that the Disney theme was not very immersive at GF like at the other Disney resorts, however we enjoyed the resort immensely and would not hesitate to stay there again.

Anyways, after we checked in to the rooms, we had barely 15 minutes to get to our Chef Mickey ADR for 7:50, so under the advice of concierge, the 7 of us piled into a cab and headed to the contemporary (cab ride cost us 10 bucks). We got there on time, and barely sat down to eat when Mickey and the gang came to greet us at our table.

Now, I have been to CM before years ago, but the current reviews made me a bit scared of the food. I came in with extremely low expectations (and I do consider myself to be a bit of a foodie), but the food was great! I had plates of prime rib (medium, just the way I like it) with delicious Kale salad. The shrimp was yummy and everyone loved their meals. The character interaction was great (Goofy did some dancing twirls with my mom) and at the end of the meal they take a photopass picture of you with a chef Mickey statue and a huge plate as a backdrop.

After dinner, we retreated back to our rooms and after following the Orlando weather report obsessively, discovered that the next day, our first full day at Disney, called for heavy rain, despite my pleading to the weather gods for a sliver of sun. So, there were some, dare I say, very difficult decisions to make. Stay tuned to see how it turned out!

What a great start! And that view

What a wonderful first-day experience! GF is on my list as well, so I am vicariously enjoying your trip immensely. Keep it coming!

I remember that too! I would have done the same thing!!!

We were there the same days. Sunday ended up being a great day for us despite the rain, as we were in MK and crowds were lower than expected. We did skip Tom Sawyer Island though. Interested to hear what had derailed your plans.

So, today, we had BiG plans. It was my son’s 13th birthday. It was our first official park day. We were going to spend the morning happily hopping from ride to ride in MK.I had fast passes for Peter Pan and 7DMT. Then, we were going to rest and swim at the hotel and later head over to Hollywood studios to watch the Indiana Jones show and eat at Sci-if diner for 5:45 ADR. Then we would head over to launch bay to meet Chewbacca and then end the night with a FP for Fantasmic. I mean, sounds perfect, right? This day was MONTHS in the making.

Even though there was a huge possibility for rain that day, I discounted it. I didn’t bring any ponchos (I know I know, bad liner) and had brought a dollar store umbrella just in case. So when I woke up to the sound of rain, I immediately knew that I had to have a plan B as it was supposed to rain all day. Even though the crowds would be lighter, I just couldn’t bear the thought of dragging my family (especially my parents who are seniors)through puddles with my stupid 1 umbrella, and knowing that the weather was supposed to be clear the rest of the week, we decided to use that day as our rest day. As Wednesday was supposed to be our rest day, I had to re-adjust our plans and plan for different parks for the rest of the week, except for the Monday, which was our BBB, CRT and Akerhaus day.

It really pained me to get rid of the sci-fi diner reservation (because you guys know how hard it is to get a decent time for sci-fi and I knew my chances of finding that time again later that week would be slim). However, I still wanted to do something really special for my son’s birthday, So I went to the GF concierge to see if they could find me a reservation at CG or O’hana that night for our family. They were unable to find one so instead, they sent my son a birthday package to our room ( a stuffed Donald Duck and holding helium balloons, so cute).

The great thing about being rained in at the GF is the amount of restaurants that you can eat at either at the resort or anywhere on the monorail without really needing to go outside. That said, we decided to go to the Grand Floridian Cafe for lunch, and that restaurant did not disappoint. We had the Cobb salad and onion soup which were both delicious. And, just an FYI, the waiter mentioned that other customers said that their Cobb salad was better then the one at Hollywood Derby. So if you’re at the GF and can’t make it to HS and want Cobb salad, you know where to go. You are welcome.The meal ended with the waiter delivering a birthday cupcake to my son. I highly recommend this place and feel bad that it wasn’t originally on my meal plan.

For dinner that night, we decided to try another restaurant that I didn’t consider originally but had great reviews from liners - the Wave at the contemporary. I was able to make a reservation a few hours before the meal and when we got there I told everyone that we were celebrating my son’s birthday (yes, I am that type of embarrassing mom). We started off with the bread and their salted butter, which was absolutely delicious and unfortunately this was the only highlight of our meal. Most of us ordered steak and salmon and I had really high hopes for this place. However, our food was overly salty, my mom could not eat her salmon and my son only had like 2 bites of his steak before he declared that he couldn’t eat it anymore. We did mention it to the waitress and the manager and they said that they would talk to the chef. Then, when dessert was brought out, there was no candle or happy birthday, despite my efforts to really embarrass my son. Upon leaving I did approach the manager about nothing being done for my son’s birthday, and she promptly apologized and offered to give us back our dining credits (yay) and gave my mom a whole loaf of bread to take home with butter and brownie mickeys for my kids. Looks like the Disney magic was back on, and that put a good taste in my mouth (no pun intended lol).

Up next, the only day where all my plans went right, but in the end, wish it didn’t (so cryptic, right? Lol).

*** I realize that these posts are not picture heavy yet ( I mean, who wants to see a pic of overly salty steak??), however, I promise, they will come).****

oh my goodness, following for more updates! Love your storytelling

So sorry for your bad experience at the Wave - not good at any time but particularly disappointing when you’re celebrating.