Musings on Dining for MLK Weekend

This will be a solo trip and I am trying to figure out where I want to eat!

Sunday (EPCOT)
Breakfast - Toppolino’s (early, before ETPE at EPCOT)
Lunch - Festival Booths around the world
Dinner - I am thinking Le Cellier. I haven’t been here since 2011!!

Still working through plans. I have just over two weeks until I make ADRs.

Everything is a new restaurant to me except Skipper’s Canteen & Oga’s which we tried for the first time in early October, and Le Cellier which I was last at over a decade ago!

Dd is a huge Lady & the Tramp fan so we have been to Tony’s a few times over the years. It is okay, but we can get really great Italian food close to home (suburban Philly), so we usually skip most Italian choices when traveling.

The Plaza Restaurant has been our go to at MK for years since it had an excellent, basic grilled cheese on the menu for my picky ds. We also loved the delicious bottomless milkshakes!! Unfortunately, the updated menu is missing most of our favorites.

This might be a good plan! I am landing at MCO at 10am and don’t want the inflexibility of a lunchtime ADR… and I don’t think I have been to CHH in over 20 years!

I want my lips on the Monte Cristo at Plaza, but no luck finding a reservation. I secured an ADR for Tony’s, but at an awkward time. So many of my ADR’s have me eating after 8pm. Ugh!

I love Tony’s strictly because of the location/outdoor seating. If I ever have to sit inside I probably wouldn’t.

And I don’t mess around with their “Italian” food because of horror stories. I am also picky about red sauce, which scares me at most restaurants. At Tony’s I stick with the beef. This time will likely be salad and the 50th wings.
CCH is great, but on solo trips I try and stay away from QS. Don’t like finding a table when I’m alone.
Look here - you’ve got me musing as well.

Isn’t it fun just going through the menus and weighing out options? The lack of being able to get ADR’s is disappointing right now, but I do still enjoy mulling over the possibilities.

What are your arrival logistics? You could also do Capt Cooks MO or Kona To Go on the way in, but how you’re rolling in might make that have more or less sense to it.

Wow, that was painful.

My first priority this morning was breakfast at Topolino’s. Not available.
But could get it for dinner (not ideal, will need to leave and return to EPCOT)

Citricos is showing as CLOSED, even today’s date! It isn’t appearing on the MDE map at all.

I was able to grab Ale & Compass for breakfast instead of Topolinos, and currently have THREE Steakhouse 71 ADRs (one each for breakfast, lunch, and dinner) and TWO Skipper’s Canteen ADRs (one lunch, one dinner).

SIgh. Need to drive ds to school. Will sort this all out later.

As @OBNurseNH would say. Supportive heart.

The dining sitch has been super ridiculous recently.

So this is what I get for Citricos, no matter what day I choose (including today) 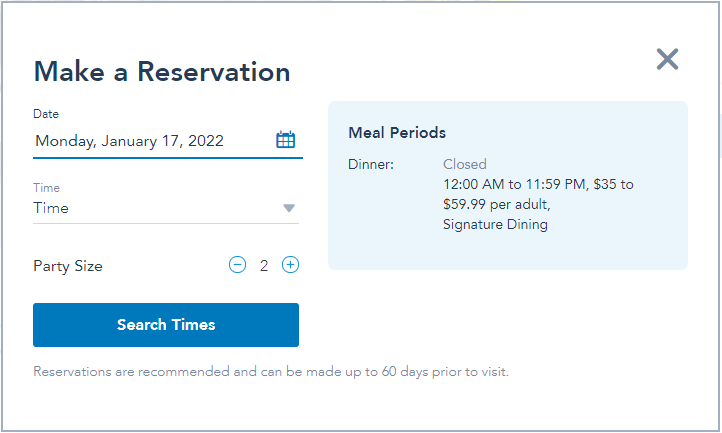 Also, if you navigate to the Grand Floridian on the MDE map, with the pull down changed from Wait Times to Dining…Citricos isn’t one of the available bubbles (but the text for it is there if you zoom in).

There isn’t anything on WDW’s Citricos page indicating that there is any kind of closure.

I got that a few times when trying to book ( specifically Citricos) too. It’s not closed at all. The engine is stupid

Just try all the ways. Search by restaurant, search by time in all restaurant listing, use browser, use app, go incognito, stand on your head, tilt and turn your head, etc etc.

It’s (okay I’m really grumpy today) effing stupid how poorly it is working these days. It seems to be going backward.

The “good” news is probably everyone else is too.

Are you trying for a Monday or Tuesday? The app at least is showing Citricos is closed Mondays and Tuesdays through January, which would also be why there is no availability today.

Hmmm… maybe that is why. Let me try Friday!

They really should put something on the WDW page that they are closed on Monday and Tuesdays!

Yay! I’m glad it worked out!

I wonder if that’s why I was getting that “closed” error. I was NOT trying for a Monday, but I wonder if that closure “if-then” statement in the programming failed and made it appear closed on Sunday too.

Not that Disney IT is ever imperfect, just musing.

Okay, here are the updated plans…

Still would prefer…and will keep working on it!
Breakfast - Toppolino’s 7:30am
Lunch - Festival Booths around the world
Dinner - Le Cellier 5:10pm (was able to update this)
Watch Harmonious (9:00pm) from Japan

Tuesday (MK) - Departure Day
Breakfast/Snack - On the Go
Lunch - Steakhouse 71 1:30pm
Flight is at 8:15pm. I will be checking a bag and should have TSA Precheck. Still figuring out when I need to leave for the airport.

Okay…cleaned up the mess from this morning.

This morning I could only get Le Cellier at lunch and grabbed a Topolinos for dinner, but I would lose a ton of time getting to and from Riveria for dinner and I definitely want to see Harmonious again. I cancelled both Le Cellier and Topolinos and will have dinner at Chefs de France.