On another feed, this topic came up, and I thought it belonged under "Attractions"
The topic was raised by someone concerned about nausea-inducing rides.

I thought I would start of with my list of “intense” rides some might want to avoid in my order, that i would tell my friends that ask the question:

Please reply with your lists, thoughts, and comments.

Definitely Mission Space Orange. I’ve never felt so sick after a ride as I did with that one.

Mad Tea Party also makes me ill especially if I let the kids really get it spinning.

I’ve been okay with every other ride at WDW, at least for one ride. Two or three in a row on Space Mountain, Expedition Everest and Rockin Roller Coaster had me needing a break.

Generally I am okay with simulators though I know they bother a lot of people.

In terms of nausea, the tea cups can do me in. That, and simulator rides if the video gets out of sync, but I have not had that problem on Star Wars (the old Body Wars ride was a different matter…)

The only other ride that bothers me is Soarin’, because it gives me terrible vertigo - I feel like I am going to slip off the edge of the seat the whole time. Sweaty palms, wobbly knees when walking out - still dies not stop me from riding it, though.

I think intense rides include:
Star Tours - cannot do
Mission Space Orange - will not do
Teacups - have to do because nobody else will ride with my little boy (okay he’s 10). If I focus on his face I do okay. If I look around even a little I’m a goner.

Just thinking of the teacups makes me sick.

I can do EE two times in a row, but I do Star Tours and the rest of my day is not gonna go well.

I was supposed to do Mission Space Orange (I had a Fast Pass for it) and my sister rod it before me. She told me: don’t do it, you are gonna be so sick. So did not see it.

Fun question! I think it depends on what gets to you … for some people it’s spinning, and for others it’s dropping. For my sister it’s anything with a simulator and a giant screen (and sometimes just the screen). She can’t take Star Tours unless we sit toward the back and she can look around for perspective. She doesn’t love Soarin’, won’t ride Mission Space (either side) and I’m guessing Flight of Passage will be a no-go also.

Personally I don’t enjoy getting tossed around like a rag doll, and Space Mountain is the worst at WDW for me. Even Dinosaur is less lurchy than that. The Matterhorn at DLR is similar – we call it the Batter-horn. (Aside: the Space Mountain at Disneyland is a favorite – it’s so much smoother than its WDW cousin!).

I didn’t have any trouble on Mission Space: Orange the first few times I rode it (with my teenagers who couldn’t get enough), but the last time I rode it I felt “off” all day so I haven’t tried it again. I was grateful for the green side since I still think the effects are cool.

I’ve never had trouble with spinning or dropping (fortunately!) so bring on those teacups!!

This is the way I am. I haven’t ridden Star Tours since 2000 (or maybe ‘98?) and remember feeling oh so yuck afterwards. Teacups =

But give me a roller coaster any day. Things that mess with my peripheral vision are what gets me. I’m hoping I can do Soarin’ and FoP without issues! Mission Space is going to be a no-go for me.

Speaking of giant screens…I can do any ride and never ever get any kind of motion sickness on them. But the films in WS make me a bit wobbly. I’m ok as soon as I get outside, but have to shut my eyes during them when it gets too much.

Generally speaking, motion sickness is caused when what your body is feeling doesn’t align with what your vision sees. This is why, for most people, roller coasters do NOT cause motion sickness for people (except those that have inversions, since you lose visual “lock” on your surroundings easily).

With motion simulators, despite how good of job they try to do, the visual clues don’t match what your body senses. The movies at WS that @missoverexcited mentioned are for similar reasons. With such a wide viewing area, your vision is saying one thing, but your body is standing still. It is a complete disconnect. When I start to feel anything like that, I look away from the screen entirely and just look at my feet or something, so that what I’m seeing visually matches what I’m actually doing: nothing!

This is also why people get car sick. You are looking down at a book or something, but your body is experiencing motion that your vision doesn’t see. So, the best way to handle it is to look out the windows of the car in the distance to prevent this.

If you are talking intense, Tower of Terror should be somewhere on the list! I actually really love this one although RRC and Space are tough on my earlobes. I can generally “suck it up” and do Star Tours, but need a little breather afterwards. I have never even attempted Mission Space or the Tea Cups! #spinninghurts But the majority of my family will not go near ToT!

But the majority of my family will not go near ToT!

I think people are afraid of ToT unnecessarily. It isn’t intense. My 6-year-old rode it. My WIFE rode it (which is saying a lot). Years earlier, my daughter also ride it very young. Everyone has really loved it.

The ride is actually extremely well done and quite cool. The actual drop part is more about the anticipation of the unexpected (which is a bit oxymoronic, I know). The dropping itself is fun.

I can’t do any spinning rides, but I did ok with the jerkiness of Dinosaur. I also did okay with star wars, but that was my first ride of the day. I’m not sure if later after other rides it would have impacted me more!

The other ride that messed with my head was RnR. I’m not sure if it was the speed or what, but I had to take a break after that!

Mission Space orange is the only Disney ride I will not go on. All of the others are fine for me.

Mission Orange makes me want to hurl. Will not go on again.

For small children however, I think Dinosaur is most frightening. Replaced the old Snow White’s Scary Adventure (classically terrifying for a young’in)!

Another vote for Star Tours. By a few moments into the ride I was soaked in sweat, eyes closed, praying for it to end before I vomited. Felt terrible for hours after. Forbidden Journey at Universal did the same thing to me. Typically it’s the simulators that get me. Oddly enough, Soarin doesn’t bother me at all though. Hoping FOP is the same. 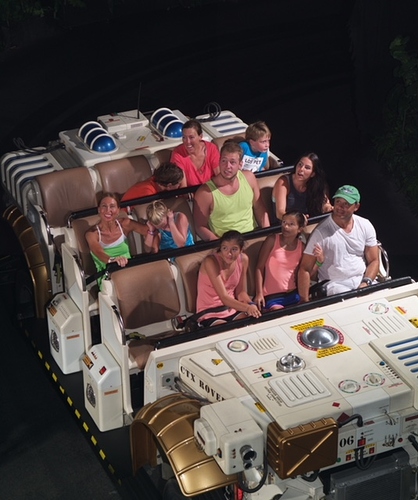 Must admit, I hate DInosaur. I’ve been on it lots of times, and every time I ask myself why I put myself through it (the answer of course is that DH finds it hilarious, so will do whatever he can to get me on it). There isn’t one single ride photo where you can see my face, as stupid as it sounds I’m absolutely terrified of that fake dinosaur at the end! I’ve heard several small kids ask their parents why that lady was screaming so much…

Luckily DH would never let our 4yo on it, so I’m safe for another few years…

Although no longer applicable, the scariest/most intense “ride” ever at WDW was The Extraterrorestial Alien Encounter from the 90s. Of course, they eventually dumbed it down to the Stitch thing, but it was never as good.

It was done so incredibly well that it had lots of grown adults coming off the thing in tears (including my wife!). Me, being me, however, was just fascinated with how they pulled it all off technologically speaking, so I wasn’t scared, but intrigued. I was similarly intrigued with Dinosaur. My wife always goes on about how scary that ride was. But it never felt scary to me. Just well done!

Regarding Tower of Terror: people love it or hate it. AT DLR, it is often the first ride of the day for many people. I have seen more kids crying when coming off that ride than any other rides at Disneyland. I am pretty sure it ruined their day.

My BIL still has not forgiven me for that ride. I have another instance where when getting off the ride, an 8-year-old told her mom: Don’t you ever do that to me again!

I LOVE ToT (my second favorite ride after TT), but it is definiltely in the most intense ride category.