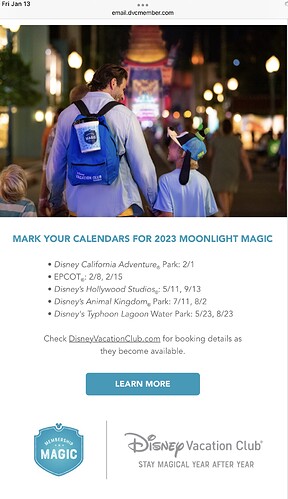 (but thanks for the heads up all the same

Going to try to make the Epcot one on Feb 8th since i will be here anyway.

I booked a room for the Sept HS date. Has there ever been one for MK?

The only MK party was years ago way back when DVC was testing the concept. I received an email sign up and lanyard when I entered MK.

And I still have my confirmation email from the MK one that was canceled before the shutdown!

Really? Curious as to why it’s a ”things I’ll pass”? What am I missing on this?

We have only been to a couple and have always had a good time.

I’ve never been to a Moonlight Magic.

Then they haven’t really had them, or the couple that have happened have not coincided with my time there — and based on this that trend continues.

We did one during the big liner meet in July for AK. Aside from needing to do the standard jumping through hoops for registration, the event felt very tacked on as an experience.

The crowds were low (numerically speaking), but Disney lowered the ride capacity for the rides so things still took a while to get on. FOP was never shorter than an hour if memory serves, as only about half of the bays were running. We only had time to ride it once. I think Everest was walk-on, but I didn’t ride it. Dinosaur had a shortish wait if I remember right. But the draw, pandora, was standard time frames for a low "September morning’ all night. Nothing near the low waits of the After Hours where you can ride FOP repeatedly in just a few minutes and the longest time spent was getting back through the queue.

You got 3 snack tickets, but only were usable for some snacks, and the lines for food were long. They also closed stands the later it got into the night. By 11PM, I think everything but Tamu Tamu was closed, so the lines never drastically dropped. The ticket situation was also hilarious stupid. The CMs had to physically write down what you ordered onto the ticket, staple it to a receipt, then store it somewhere. Eating up time instead of just taking the ticket and being done with it.

Then they ran out of many snacks. The ice cream truck ran out of most flavors of ice cream that the ticket covered. (the side booths that were giving away mickey bars and strawberry bars were well stocked though. We hit those multiple times) Pretzels ran out as well at one booth and by that point I’d pretty much gave up. I used 2 tickets of my 3, tried to use the 3rd for a late night coffee at Tamu Tamu but…they ran out of coffee too. (Side note here was the CM was SUPER nice and tried to give me anything else on the menu I wanted at no charge, but nothing interested me so I kindly declined)

They also gave you a carnival game ticket to use…but, like almost everything, the lines for that were nuts so I didn’t use it. I don’t know if anyone did.

This whole thing was only 3 hours long. So any significant line really ate away at time. Which is why we all avoided FOP until it was the last ride of the night because of the wait. (though when we did get on there, it was a hilariously good time cause the whole room was just heckling the crap out of the preshow.)

It wasn’t ALL bad though. Being in AK at night was awesome, of course. And free food is free food, so yay. But it was the liners that made the event for me. I said in the trip report that if wasn’t for the Liners, I would’ve gotten my nighttime AK photos and bailed by 10PM.

so if you got friends: bring’em .

so if you got friends: bring’em .

Yeah thats for me the key to disney in general, but also the reason I enjoy the moonlight magic events- when we can get in this is usually when I invite my non park peeps, meaning no-APs, because its a free event and doesn’t require park admission.

I still have a couple of the coupons left. It was neat to see Pandora at night again, but the lines were bad.