Okay, so they released the dates and the first party night falls within my stay. This will be our first time.
So I need all the tips, information anyone is willing to give. Generally how much are tickets, times of the party, what to see what not to waste time on, touring suggestions. It will be myself, DH, DS12, DD10 and DD8.

Here’s a blog that explains a lot of the details!

Here are the answers to all your most-pressing MNSSHP questions.

Costumes are fun if they’re comfortable (including the shoes, I learned it the hard way). Plan carefully if you want to do the character meet and greets, lines for popular characters are long. Get there at 4 (have fastpasses at 3:30 4:30 5:30) and do rides. Save roller coasters for after dark because they’re even cooler then! Counter service is a better use of time than table service. The parade and fireworks can’t be missed.

Check out www.kennythepirate.com for good information. I am not sure if adults can be costumed anymore.

Hallowishes is nice. Definitely do it on main street and the parade is good fun.

Adults can be costumed but the announcement said we’re strongly discouraged from wearing layers like Jedi robes or full-body surrounds like an Up house, on pain of security screening. Seems a bit vague but personally I don’t mind complying with rules and screening as long as I can wear my Figment gear.

The parade is awesome. We got a spot in Frontierland an hour prior to the start, and had first row seats. We viewed the fireworks from Fantasyland (near the Carousel), and that was enjoyable.

Normally the party starts at 7 but you can enter park at 4. When my kids and I went we skipped the park that day and saved money from doing both tickets and just did the MNSSHP. We enjoyed a few rides before the party, went to meet with Seven Dwarfs (before party started) and then went trick or treating the rest of the evening. We rode a few rides and walked around but definitely do not miss the parade and fireworks

For costumes, I wanted my kids to be comfortable all evening so we just did T-shirts. My girls wore skirts that matched

We had a blast and would absolutely do it again! Don’t forget to get the special sorcerers card! 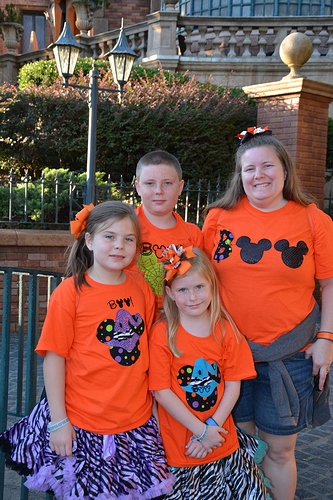 MK_HAUNTEDMANSIONEXIT_7084060299.jpeg4000×6000 3.56 MB
Agree with @jenphalian that a counter service is better. Or you could eat before 4 and then just snack! And definitely get fast passes before the party that you can use

The day we went, they actually let us in at 3:45, but get there earlier, because the crowd amasses quickly!

Definitely do the 3 FPP! But keep in mind that not every ride is open during the party, so if you really want to do the Jungle Cruise, for example, make sure you do it before 7!

Best place for the parade (IMO) is right by Splash Mountain. Right by the service entrance where the parade comes from. You can see it coming around the bend (really cool to see everyone in character even though they are performing for trees and a wall!) and because they are spacing things out at that point, you can see everything longer than at MSUSA. The characters paid us A LOT of attention because they had extra time. PLUS the parade is over for you first, so you an get in line for more rides or M&Gs while most everyone else is still watching the parade. BONUS: If you are wiped out and want to leave after the parade, you can walk through Adventureland and through Casey’s/Emporium, all the way to the entrance before the front of the parade gets there, and you can walk out and get a bus fast! OR if you want to see the parade a second time, do the same thing and stand by the end of the Emporium, you’ll get a front row place at the end of the parade route when they rope it off at the last minute. Worked great for us last year!