MNSSHP entertainment- how to do all the shows?

What’s the best strategy to see Not So Spooky Spectacular, Hocus Pocus and parade at the party? Where to stand and how early do you need to get there?

Last year, my crew hit both of the parades and snagged a not-so-great spot for fireworks on the side of the hub. We then caught the Hocus Pocus show at midnight. I honestly wish we would have watched Hocus Pocus earlier in the evening so that we could watch it again. It was really good!

Last year we arrived about 20 minutes before the first parade started in Frontierland and had an almost front-row spot. We then watched the fireworks from the garden in front of Casey’s and were able to sit on the fake grass while waiting. I would recommend getting to this spot about 20-30 minutes early if you go to a sold-out party as we did. Right after the fireworks we maneuvered our way through the crazy crowds to get a spot closer to the castle for the Hocus Pocus Show and had a great spot.

Hocus Pocus seemed to have a seemed to be a smaller scale event. I missed it. You probably want to be right by the castle for it. A couple small fireworks go off near the end letting you know when it is winding down if you are not at the show.

We watched the spectacular slightly off center on the path towards the terrace side entrance, which was a good viewing spot. The farther you get off the center, the bigger the separation between the castle and the fireworks, since they are a distance behind the castle. Got there at about 9:50. It was crowded, but we asked people if they could make some room for my boys and the kids were able to lean on the wall for the show. There was a definite a rush to the attractions after it was over. Teenagers running in the dark. Unless you sit way off center, you are not going to beat them to the attractions after the show. We cut through the Terrace and there was still a 30 min line at space mountain by the time we got there. 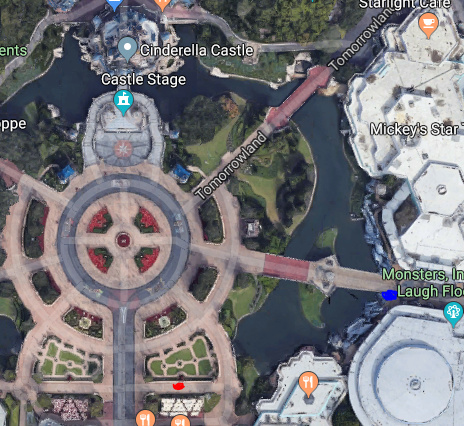 We were at the Red dot. We watched fireworks from the blue dot a few days earlier and there was a separation between the light show and the fireworks

We got a seat for the second parade at town square by the exit. It was not hard to find seats there at the fairly crowded Aug 16th party. The pluses for that spot are easy exit for the buses and lots of corners so you can get views coming and going. The down side of watching at the town square was that the headless horseman goes much faster than the parade, so there is a long delay between him and the parade near the end of the route. The center of the town square is reserved for people with wrist bands that they got from a dining package at Tony’s. Might be worth looking into that if you are on the meal plan.

so you were able to make your way to Frontierland to Casey’s without much problem? I would think there would be a lot of people there waiting after the parade to watch the fireworks? Thanks!

Yes, we cut through Adventureland to get to Casey’s pretty easily.