We are going next week to Disney World. Woo hoo! The two days we are doing HS, the park has early EMH. I think we should do Millennium Falcon Smuggler’s Run first but Touring Plans optimize function says no such thing. It consistently advices to do MF later in the day with expected waits of an hour or more. Wouldn’t it be faster to be there at rope drop and do it first?

Only if by rope drop you mean get there 1 1/2 hours early…otherwise go later in the day.

I think it depends on how good you are at rope drop. Front of the pack? do SR. Rolling up to the gates right at opening time? hit it later in the day.

If park opens at 7 and we are there by 6:15am would that ensure we are at the front of rope drop?

I mean I can’t believe @ryan1 or fatty did not say something about “smugglers rub”. I mean it was set up for a robe drop or any other comment. Does not sound like that is a PG ride.

When the parks opened at 9AM last Wednesday we were there by 7:45AM to be front row at the rope. We were headed to SDD though. I can’t tell you how that would work out for MFSR.

Literally why I clicked - disappointed

Hopefully someone with recent experience will comment, but my experience doing RD at AK for FOP tells me 45 minutes Is not enough. With TSL splitting the crowd, maybe that will be enough at HS, but for AK, you need a solid 60-75 minutes head start.

On Monday I did the same as @qwerty6. Got there around 7:45 and was about 15 people behind the front of the RD crowd. I did go to MFSR and basically it was a walk on. The cast members did a great job funneling everyone in as we got closer to the entrance of the ride. You will always have people trying to push ahead but overall it was not a bad experience.

Sorry, but you’ll need to get there at least an hour early - preferably 90 minutes - if you want to RD MFSR with little to no wait. I’ve been monitoring the queues for it, from MDE, after being open for about 15 minutes the wait goes up to 45 mins - 60 mins.

Today’s queue after being open for 15 minutes has stayed steady at 60 minutes. (which probably really means 45 mins) 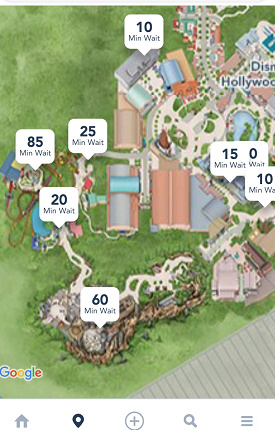 Would you recommend trying to go at RD or 11am? My current plan has us at Droid Depot at 10:20am, followed by MFSR. We need to be out of there by 1 at the latest…though I would love to make the 12:30 Frozen show if possible. TP says I can do it.

Is this at all related to Robe Drop?

Haha - I have obliged. I’m perpetually a 12yo in my mind

Remember as well that MFSR has no FPP, so the standby line moves better than RDing other headliners like FOP which have to accommodate FPP reservations. This may mean that getting to HS 45 minutes to an hour early may be sufficient to ride without much wait.

Droid Depot will take at least 25 minutes probably closer to 35 minutes. You should be done there by 11am. I’d suggest you arrive to your reservation about 5 minutes early.

The queue at MFSR stays at about 45 - 60 minutes all day. You should be done there by 12pm. This should give you enough time to get to Frozen.