So some people may remember my story. I was going to go in June of 2019 but we moved it up to Thanksgiving of 2018. We last went in 2016 and we went to MVMCP while we were there. We went the week before Thanksgiving week. My question is: I am looking at the dates for the 2018 party and there aren’t any during Thanksgiving week. Is this normal? I was really hoping to go again.

Yes, I believe that’s correct. The last party is the Friday before Thanksgiving which is the 16th. Then they resume after the holiday week.

Thanks. Well, that’s not cool at all.

Could you do the candlelight processional instead? I believe they typically start those shows right after Thanksgiving.

Possibly, but our last day in the parks would be the day after Thanksgiving.

I might see if we could drive down half way on the Thursday before. We could get there the Friday night before Thanksgiving and start our vacation that way. That would be my ideal way to start. Last time we went to Mickey’s Barbeque and it was incredible. This would even beat that, I’m sure.

I really like that idea! I have always hesitated to book a big event on our arrival day in case of flight delays, but if I was driving I would definitely do it! Great way to start a trip.

I saw that they didn’t have the party on Thanksgiving week in the end we had to book party tickets the week before. Hopefully you get to make it to the one on the Friday, I have never been to MVMCP before so looking forward to it after experiencing the Halloween party last year.

We went in 2016 the week before Thanksgiving week. It was really incredible. That’s why I want to go back so badly. Plus, there were plenty of things we didn’t do. We did more of the parades/fireworks/show. This time( (if we can go) I would do M&G and rides.

Any tips for the Halloween party? Taking my three (12, 8, and 7) for the first time. Lessons learned?

just there is so much to do the fireworks were amazing my mistake was not grabbing a map straight away as it has locations of all the Halloween activities on like candy locations for trick or treating they give you trick or treat bags when you walk in and times fore parades, fireworks and shows etc. Also if you have memory maker they have loads of photo pass photographers out they get great shots in front of the Halloween lit up castle. ride times weren’t that long when we was there so for us it was a good time to jump on 7 dwarfs mine train as we only waited 25 mins. this was the map we had that showed all things going on. Hope you all enjoy as much as we did was well worth it 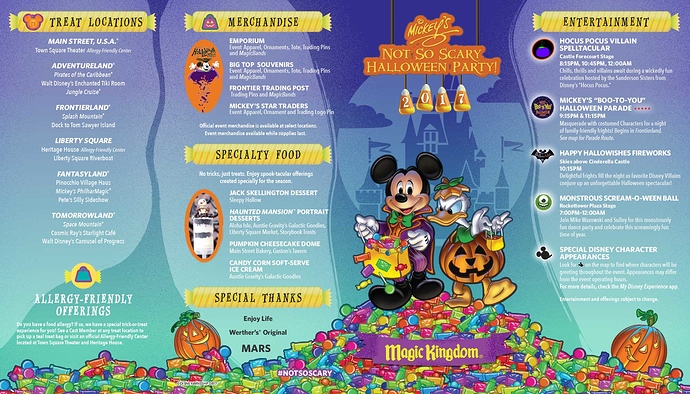 Thanks! What time of year did you go and how were the crowds?

we went the second week of October and it was fairly crowded but not as bad as I thought it would be.