Wondering if anybody has any insight on this … Chanukah starts during our trip. Would we be allowed to light the menorah in our resort room? They’re small candles, usually burn for 30 minutes, and we wouldn’t leave it unattended. Thanks in advance!

I don’t have direct evidence to support this claim, but I’m fairly sure it is against the fire code to allow burning of candles in hotel rooms.

I don’t know the answer to your question, but I wonder if there is a Menorah display somewhere at WDW.

It doesn’t sound like a good idea. I wouldn’t do it.

If you ask at the front desk, there may be a space other than your room where you could do it. I’ve seen candles lit at hotels for weddings, so I assume there’s not a total ban.

I think for safety reasons, they wouldn’t allow it in the rooms. But my understanding of Jewish Orthodoxy really does mandate the use of real flames, and not electric candles as a substitute, so I’d think Disney would have SOME way to accommodate that during the season.

Thank you so much, that’s what I’ll do!

I’ve filled a WDW hotel room with candles for a romantic evening with no issues. No one is going to bother you or even know. The smoke detectors will not go off for a few candles.

Have a happy & safe Chanukah!

Hahaha perfect! I knew someone had to have tried it before. Thanks!

I found many forums post elsewhere with far different results/opinions. That is, almost universally it is agreed it should not be done even if you can get away with it, and some posting that they were “found out”.

There is also concern of certain candles with scents sticking around in rooms long enough to cause allergies for those who might stay in adjacent rooms, etc.

Then, there is the issue of liability and safety in general. Probably nothing will happen…but what if it does?

I would ask the folks at Disney yourself, personally.

I will bring it up when we check in. Chanukah candles are (stereotypically?) cheap, unscented, and small - like birthday candles. If it’s a problem in the room hopefully they’ll let us do it in a more open space!

If I would be there over chanuka
I would light in my room with curtains closed so no one can see in. Stay inside entire time candles are lit (ok to put them out after 30min) and put everything away prior to leaving the room

You are going to be lighting fewer candles than most people have on their birthday cakes while in their rooms. IMHO - While I appreciate your wanting to follow the rules, this isn’t something to even worry about.

This is exactly what I had in mind when I said there might be displays around the parks but I didn’t know where one was. Beautiful! 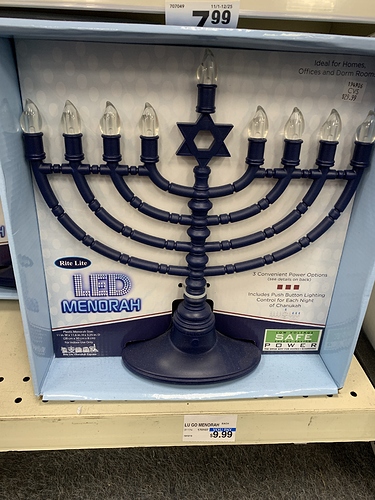 Just seeing this at my local CVS and thought of you!

Slightly different purpose but thought I would share. When we were there in August, we celebrated DGD birthday and ordered a cake from the hotel. They delivered it with birthday candles and matches so they were obviously OK with us lighting the candles in the room since they provided everything to do so!

Interesting. One of the posts I read was from someone who used to work for the Disney Florist, and they made a point of saying Disney would only provide flameless candles, never candles with flames. Your anecdote seems to contradict that.

But, you know…it’s Disney. Don’t like the answer a CM gives you? Talk to a different one!