This is our first time to Universal. We have 1 day, and are staying at Hard Rock, so we will have early access to IOA and fast passes. We have 4 adults, 1 7yo and 1 5yo. Wanting to focus heavily on Harry Potter, but definitely interested in Transformers and Spiderman/superhero stuff for 5yo. Can the app create a plan for 2 parks in 1 day? Where do we start, what can’t we miss?!

Did you download the app? I see a two park one day plan in my Universal TP app. 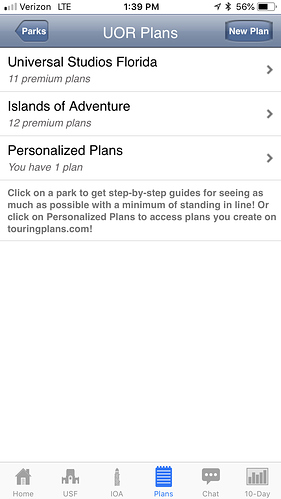 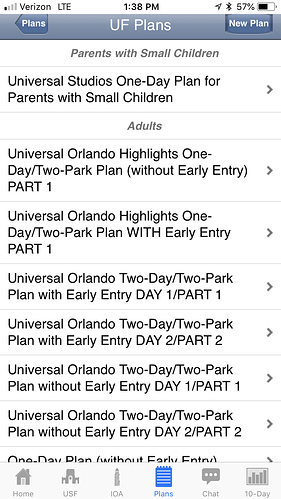 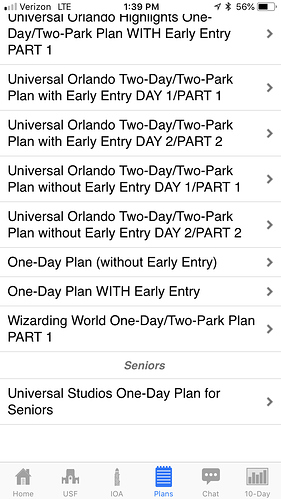 You would do the same for the second half: 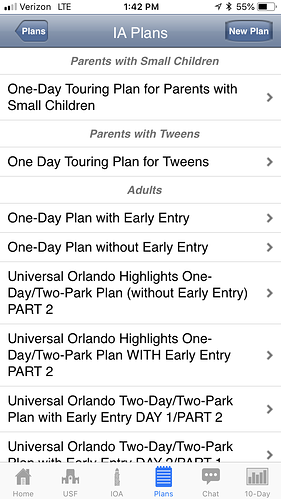 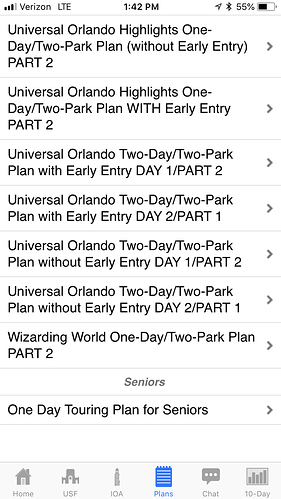 You can do plans for two parks in one day, but they have to be two different plans. Unfortunately, it is not possible to create one plan that jumps between the parks.

I find the one-day two-park plan a little annoying with it being broken up into two plans, frankly. Touring Plans do such great research and deliver in so many good ways, that this really puzzles me that we can’t just have an all-in-one. But hey, what do I know? They are light years ahead of me in data crunching.

Maybe I’ve got it all wrong, but I actually have four plans for 1 day at IOA/USF. We want to stay immersed in WWHP for most of our visit, so I have 1 for WWHP at USF, 1 at WWHP at IOA, then one plan each for the other attractions at each park. I feel like there has to be a better way.

The other way to do this is to make one plan for each park, inserting a break in the middle of the day that corresponds with the length of time that you will be in the other park. For example, if you are going to start your day in Diagon Alley and be in Diagon Alley from roughly 8 to 10, and then head over to Hogsmeade from roughly 10 to 12, before returning back to Universal Studios, you would make your Universal Studios plan showing your time in Diagon Alley ending at 10. You would then insert a 2 hour break in that plan to cover the time you would be in Islands of Adventure and then start your plan back up again when you are back in Universal Studios. I know this sounds complicated, but once you get the hang of it, it’s really not that difficult!

While I agree it is cumbersome to do this in the app…I doubt you will need the plan at all anyhow. We very quickly abandoned our plan because we found it just wasn’t necessary…and that is without Early Entry or the Express passes you have. The estimated times in the app were considerably off what the reality was, and less accurate than the times in the Universal App itself.

What I did find helpful, however, was going through the act of making a plan ahead of time because it helped to better understand how we might do things.

What I did find helpful, however, was going through the act of making a plan ahead of time because it helped to better understand how we might do things.

Yes, this! I always encourage people to do this because, while the actual wait times might not be dead on accurate, it does give you a good idea of where the crowds tend to be at any given time of day.

Thanks! This is kind of what we have done before for DW. I just have NO clue what to do in Universal and know we want to get a great HP experience

I am confident that, with or without a plan, you will have a fantastic Harry Potter experience. The Harry Potter areas only have a total of four rides, and several shows, so you’re not trying to juggle many, many things that require a lot of planning. Most of the experience comes from really just taking in the details as you wander through the areas, which don’t require a plan at all!