I’m planning an early June 2022 trip to DL/DCA and I see in the crowd calendar that DL closes at 6 pm on Sunday, June 5. DCA is apparently open until midnight that day.

This is the only day in all of June that DL closes before midnight. Anyone know what this is about? I see that date is Shavuot (Jewish holiday?). Could this be related to that or a grad night thing? Just trying to figure out whether that day is worth visiting. Not opposed to hopping over to DCA that evening.

Thanks in advance to anyone who might have more info.

Is that one of the parties like Star Wars?

Can’t people rent out the park? Maybe someone famous is doing that or something? 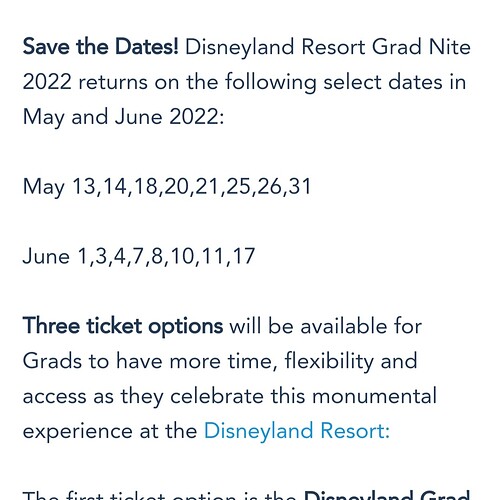 I don’t think its a grad nite closure so it must be a private party or CM party? Sometimes the local radio stations will throw a party and they close the park early for that.

The crowd calendar uses historical data to make predictions. The official schedule from DL won’t start to appear until 6 weeks before and until then there won’t be any official, from the source way to know if that will be an actual early closure or was just based on a one-off past event.

I looked it up and according to my Google search, DL was bought out for a private event. Disneyland will close early 6pm on Sunday June 2 for a travel industry convention private event.

We go often in June and it isn’t usual for an early closure of DL (but we also tend to go more towards the 2nd or 3rd week of the month, but we have been there for the 1st week of June a couple of times).

But I would say, if that time works for you in your schedule and you were already planning on park hopping, catching that late evening in DCA would well be worth the time and I would still consider it worth going.

Thanks all for the input! Can’t wait to book our first trip since early 2019.

On a related note, I wonder how much it costs to book a 6 hour private DL party. That has got to be astronomical.

Right?!? Especially a weekend day in June. It was the first I’d ever seen a closure like that.