TP predicts CL 9 for Thursday 7/18. Does anyone have any thoughts as to why that would be?

Not off the top of my head. Just curious why it seems odd to you? That info might help us answer your question.

I think they are referring to the low CLs this summer has had thus far.

Not sure why the spike on the 18th, but the 17th is DL’s birthday, but that would not spike it to a 9. I was there last year on the 17th and it was a bit more crowded, but not that bad.

Yeah, I’ve got nothing.

Their program is pretty robust in what it accounts for. I think there have been challenges recently but overall I think they get it right more often than not.

I think that they way they did last year has also skewed the data a bit.

To my knowledge, the Crowd Calendar has not been updated recently to account for the unusually low crowd levels we’ve seen since early June. Most days the prediction is way higher than it actually ends up being. Most days in June were 1s and 2s while July has averaged 4-5 with the highest day being a 7. I would wager that even if July 18th is a 9, it will feel less crowded than a typical 9. And there is a good bet it will be lower than 9. It’s a good time to go to DLR.

the Crowd Calendar has not been updated recently

Correction: I was wrong about this - the DLR CC has been updated. But I still think they are struggling to calibrate it just right and my point above is still valid.

I agree and while they have updated it, I still think last year’s data is skewing their predictions.

So hoping they are right and crowd levels will remain smaller than expected thru the summer! We are there the last week of August and I can’t wait!

Report back, please! I am living vicariously through others at the moment. LOL

I will! It is funny. I went to WDW in May and some asked me if I thought it ruined DLR for me, however it is quite the opposite. I am super excited to go “home!”

I have friends who are DLR devotees and really did not like WDW. I’ve only been to WDW once and that was over 7 years ago. I loved it! But it is a totally different experience than DLR. And as much as I enjoyed it, it could never ruin DLR the OG of parks. LOL

that’s us too. as soon as we did FPP at WDW, it made me more excited for Maxpass, which was not there last time we went to DL. We fly down Thursday, in parks on Friday!

I just got back tonight. It was AMAZING!!! The crowds were so light and with MP were burned through nearly everything in record time. I am exhausted, so I will report back in the next days or so about my adventures!

We were in the parks yesterday 7/18 for a last half day before driving home (from about 9am-2pm) and it felt the busiest of all the days of our trip and it ended up being an 8 in both so Touring Plans wasn’t far off predicting a 9.

I don’t know exactly why the spike in crowds now but we sure felt the crowds increase as we got later on in the trip starting with lower crowds over the weekend & then by Thur being in those 8 level crowds that felt every bit of an 8.

I wonder if it was partially due to Disneyland’s birthday on the 17th? Looks like that day was a 7 so maybe people just stayed for a couple of days. I’d be curious what made TP up the crowd level that day.

Here is the historical (actual) crowd levels for the last week or so: 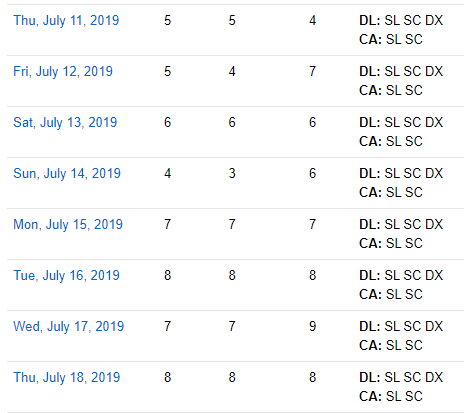 Possibly although you could tell a lot of people who were there were there specifically for the birthday but it wasn’t as huge a crowd as in other years we have been there.

I think it did help that it was a Wednesday (middle of the week so a more awkward day to take off work than a Mon or Fri or even a Thur). Also, this year instead of doing one cavalcade celebration once in Town Square, they put the birthday cavalcade in front of each Soundsational parade that stopped at 3 different places on the route to sing Happy Birthday over the loudspeaker and blast confetti which I felt really spread out the Disneyland birthday crowd along 3 locations for 2 parades. We also got a Hungry Bear F! dining package anticipating that we would want to secure a way to see one nighttime show without it being bananas & it worked out fantastically!