Also known in my house as “the man with the funny stuff hanging from his ear”. A true legend. He will be missed. 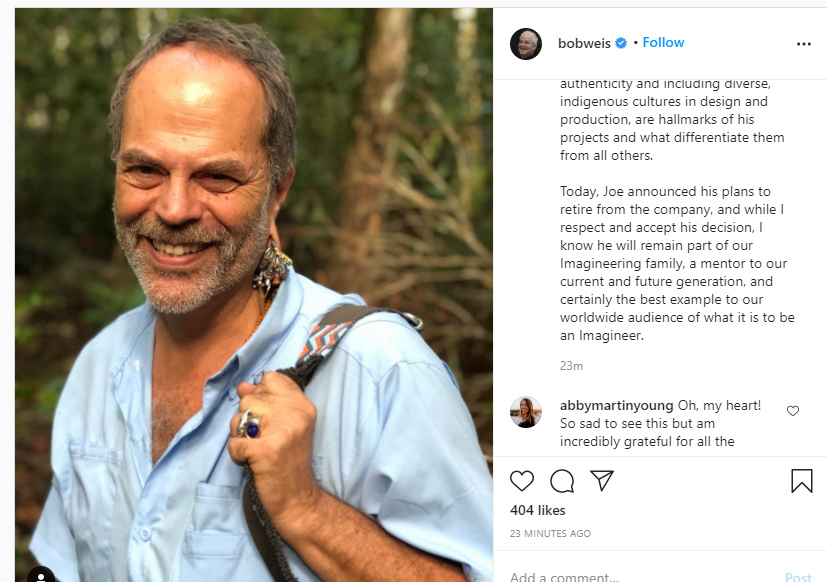 Well deserved, happy for him.

But wicked sad for all of us.

I hope he still does Tiffin Talks. I was 100% going this past April until frickin Covid ruined everything. It’s a bucket list item. I love the heck outta him and I’m a total fangirl. He’s responsible for my favorite place, after all!

the man with the funny stuff hanging from his ear

While watching The Imagineering Story, I was worried each time he was on screen that his ear would pull right off! Clearly it hasn’t…yet!

Sad, but good for him. He has always been one of my favorite imagineers. Would have loved to been able to sit down with him, such a great story teller. I ran into him once at AK, he used to walk the park frequently.

This makes me sad. And then I feel bad because the poor man deserves to retire if he wants to! I just think he’s brilliant. I love how he explains the emotion they are trying to evoke from a ride (say Guardians of the Galaxy - Mission Breakout in DCA) and then realize that that IS the emotion I feel when I ride it! I would love to sit down with him and just listen to him talk … but I’d probably be starting at that ear thing. Remember in Austin Powers when that guy had a mole on his face? Moley, moley, moley moley! That would be me. I will just admire from afar. James Gunn's Farewell To Retiring Disney Imagineer Behind Guardians Of The...

One of the greatest Walt Disney imagineers ever is saying goodbye, and James Gunn is saying farewell.

I went looking for this thread today. I have heard multiple reports in the last few days that in October Disney told him they didn’t have another project for him. There is chatter that the retirement is part of the reduction in imagineering and not completely by choice. Are others hearing these reports?

Yes, I have. It was suggested by someone who seems to have some good inside information about the Burbank team and Imagineering.

It’s also true he had made comments during the closure period that he had other things he wanted to do; he is 65 after all. And he had also previously said that the Lighthouse Point project for DCL was his next big project. I assume that has been put on hold.

I suspect it could have been a case of Rohde asking directly what projects he might get instead, being told there was nothing significant coming up and Joe then deciding the time was right to “move on”. I also expect he may come back as a consultant on a project in the future.

I am hearing a lot of references to him being “expensive”.

Ryno Clavin shared in the Dis podcast last week that someone he knows who is close to Joe said it was part of a reduction. Here, take this retirement now and we won’t have to let you go, kind of thing.

They discussed how his projects are never inexpensive because he is so very thorough, and they don’t have Rhodebucks right now to do things. So I think the fact of them not having a project for him right now rings true.

Thanks, that is aligned to what I have heard in a few places.

@OBNurseNH, it does not help my bad attitude.

references to him being “expensive”.

Didn’t “The Imagineering Story” talk about cutbacks being a major screw-up? Apparently the current execs forgot to watch it.

I mean it is a pandemic with catastrophic financial consequences. So on some level I get it.

But Joe is a treasure

Yes, but many companies have learned the consequences of cutting too deep, particularly with employees. The long term costs may be enormous. My first employee spoke frequently about have a large gap in employee experience due to a hiring freeze during a multi year recession. “Never again” was the message. They reduce hiring but never freeze it entirely. The cost 5-10 years down the line is too great when there is nobody to fill important jobs because of the experience gap.