We’ll have a blog post out on this shortly.

We think the estimates from the last crowd cal update were incorrectly low, primarily due to a default setting change in the software we use to produce the models. (The setting was changed in a new release of the software, and it changed how the models were produced.)

Fred alluded to this in our mid-December blog post.

We knew November’s estimates came in lower than actuals. We spent most of December trying to figure out why, and how to fix it.

We expect to update the calendar on a regular basis going forward. The other things that we’re trying to model now are:

As a software engineer, I feel your frustration - having a library or software that changes its settings can lead to really hard to track bugs… Out of curiosity, have you seen an impact yet from date-based ticketing? Also, second question - have the models factored in the fact that last year Disney cut staffing back significantly in Jan/Feb, but this year they probably won’t do that?

We’ll have a blog post out on this shortly.

Thanks for the info in advance of the blog post!

So, is there a major change in the algorithm? This looks larger than just an adjustment. For example, AK showed a CL of 1 for Wednesday, January 9th (as screen shot to my wife yesterday). Today (just 12 hours later), it’s showing 9 out of 10 for same day. 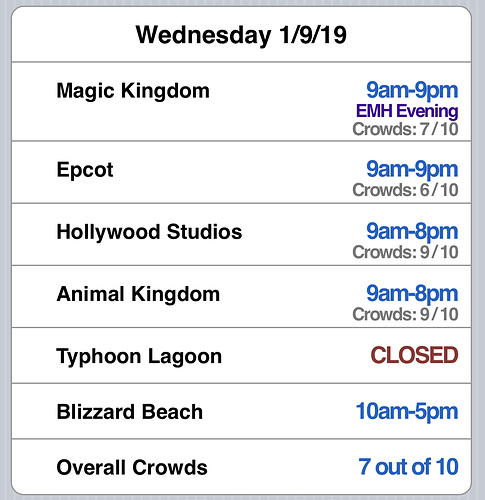 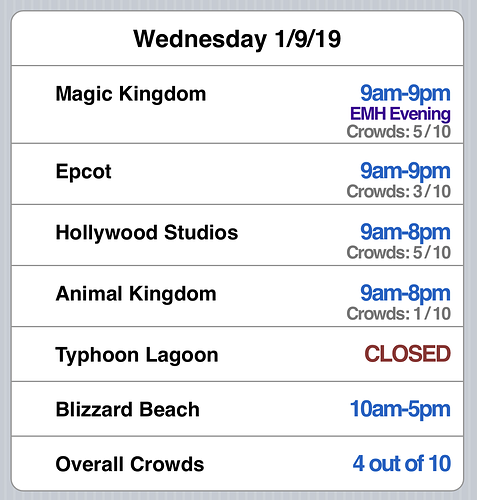 Speaking of cutting back staff, personally, I’ve been wondering if part of the reason Disney went to the date-based tickets is so they have a better idea of crowd levels themselves and can staff accordingly, keeping wait times from ever getting lower than Disney thinks they need to be. I’ll be interested to see how that pans out.

I’ll check with the stats team on whether the WDW ticket season has shown up as one of the top 30 factors yet. It may be too early still, especially with the November and December holidays.

Our family trip starts next week (1/10-1/19) and I just received the update email this morning. WOW! some of the days jumped - particularly Saturday, January 12th.

I know it is the Marathon weekend, but that isn’t new information. Isn’t January supposed to be a “good” month for crowds? How could it jump this much so close to our visit? Pre-planning isn’t of much use if things change this drastically right before you leave!

Thanks Len, and we do appreciate all you’re doing, but things like 9 days of CL10 at AK at the beginning of March still seems like an error in the model worth investigating.

There definitely is something wrong with this new model. I have been going to WDW for the last 5-6 years always during the same period (First week of march). Crowds have always been 5-7 in my opinion…

Anyway, am I safe to tweak my plans based on the new crowds level or I should be expecting more updates in the upcoming days ?

We’ll check it out. Thanks Simon.

I just an email with big jumps for NEXT WEEK. I can understand March, but early Jan? (week between marathon and MLK) I planned the trip timing based on touring plans predictions of crowds of 2 and 3. Now, one week before the trip, they jump to 5, 6, and 7! Poor service. I will NOT recommend crowd tracker to my friends.

So numbers are numbers and predictions are just that. The crowds are going to be what they are going to be whether the predictions are correct or not. It’s a bit like the weather. Would you recommend the crowd tracker to your friends if the predictions for CLs when you’re planning to go went down? My family is going the week of MLK Day and some of the CLs went up as well. While disappointing to a degree, at least I can plan for a higher crowd instead of being surprised when I get there. I can adjust my touring plans and set expectations accordingly. We all know that Disney is doing everything it can to spread out crowds throughout the year. The fact that they are offering free dining during the SUMMER proves that crowd levels shift and change over the years. It used to be that October was a great month to go for crowds. But now it’s looking like summer last year (and it seems this year) will be a good time to go for crowds.

I still think getting a general idea of what the crowds will be like, even the week before, is more helpful than not havinga plan at all.

Also, when I updated my plans this morning, the changes were not too significant.

I know you’re basing the numbers on wait times, which is very helpful, but as staff adjustments have a larger effect it would also be nice to also see a predicted how-many-people-in-the-parks. I have good FPP so I can manage wait times with the help of those and a personalized TP, but it helps to know if it will be hard to walk from place to place, if there will be huge lines for bathrooms, etc. Is that something you guys would consider adding?

I can totally understand holiday weekends and summer. But I am going weekdays in between holidays and in January. I figured touringplans has more inside information and computer power to predict anything I wouldn’t know. So they should have made this change more than A WEEK before the dates.

I have similar concerns. I just posted a separate thread for my specific case. Both of my AK days the end of this month went from low crowds (~2) to 8s! I’m not concerned with wait times- I have touring plans and fastpasses for that. I’m concerned about numbers of people at the animal exhibits, on the paths, and crowding the QS seating areas.

Actually, as someone with anxiety, that is what I’m ALWAYS concerned about. I can stand in a queue without a problem…when people start invading my walking space, bumping into me, and when my short self can’t see anything due to people not moving- that’s when I start getting panicky.

Commenting more to follow than anything, but my days also all went from 4-6 to 8-10. This is just me and my mom, and we would never book a trip with CLs of 9 and 10 the entire time.

Like others, it’s not the wait times as much as the feeling like we’re sardines. I have no interest in dealing with Christmas level crowds - if I did I would go at Christmas.

coming ffrom Minnesota, I would have booked this trip in warmer weather. But thought dealing with cooler temps in Jan would be worth the extremely low crowds previously predicted.

Looking at the blog post it seems like they are factoring in the risk of Disney cutting staffing on the rides. If this is the case, the lines may seem long but the atmosphere in the park will probably make it not “feel” crowded.

That is what I am hoping for! Fingers crossed. I can totally deal with that.

So the blog post says this about early March:

Thanksgiving 2018 was busier than expected. Our models treat that as evidence that other peak weeks will be busier too. That is partly why we see large increases during early March, a big week for Spring Break. However, the second half of March sees changes on this update in the downward direction.

But that doesn’t represent this year’s Spring Break dates as shown in the national date databases, only a small number of schools and colleges take Spring Break early March when Easter is so late. Has this been taken into account?

It’s just all very counter intuitive, early March’s moderate crowds have gone to Christmas time busy. I hope it’s just a modelling error as we’re all booked and ready to go with FPPs in place for many of the days already.