ILL strategy when you're let in prior to 7 AM

We could potentially run into this in DHS and AK during our upcoming trip. My husband is absolutely dying to go on RotR; Galaxy’s Edge is the only thing he is insistent on doing in all of WDW. So we’re planning on using ETPE, we have purchased Genie+ (though that’s not relevant for RotR specifically), and we’re willing to shell out the $15 for the ILL. So I was originally thinking we would try to buy the ILL, if we don’t get one, no problem, we’ll rope drop it. BUT the day we go, ETPE is at 7:30, and I’ve heard that they will sometimes let guests in up to 60 minutes prior to even that, so the queues could start forming as early as 6:30(?!)

A) get in line for something else on our list (maybe SDD or MFSR) and attempt to buy the RotR ILL while in line? This risks having to do RotR standby if we can’t get the ILL, but if we do get it, we could potentially have very short waits for several popular rides. My ideal scenario would be get ILL for RotR and Genie+ for either SDD/MFSR at the 7AM LL drop, and rope drop the other, but obviously I can’t plan that out with any certainty.

B) Rope drop RotR just in case and try to buy the RotR ILL while in line. If we manage to snag one, we could get out of RotR line and get in line for SDD/MFSR depending on the 7AM Genie+ success (though we’ll be further back at that point).

I’m leaning towards B because RotR standby sounds truly awful and I’m afraid to risk it, but wanted to see what others thought. I’m not sure how fast RotR ILLs are selling out these days. We’ll probably adopt a similar strategy in AK (if it works in DHS!) since regular opening time at AK will be 7:30–I’m assuming we will be in the park before 7 using ETPE.

Also, my TP (created w/o LLs) has me getting on MFSR first with a 2-min wait and then RotR, and says I’ll have a 33 minute wait for RotR at that point (getting in line at 7:50). Is that accurate?

Because LLs in HS can run out early, we elected to pay for a ROTR ILL so that we could RD other rides (fewer rides we would need LLs for). This was our first time at HS and we only had one day there, so our list of must-do attractions was long and as big SW fans, we were willing to pay to ride Rise for our first time. I was also worried about rope dropping Rise and it being a morning that it happened to be down and losing that valuable RD time. HS opened at 8:00 for early entry our day so we were making our ILL/LL selections from the sky liner rather than in the park (we did have a day at AK with 7am ER, and it was stressful dealing with G+ while making our way to FoP).

We ended up getting a 2:30 ILL for Rise. It broke down while riding, so I was happy that we still had plenty of time to return later in the day after it was up again (we weren’t hopping so we had the entire day to spend at HS). There are several drops for Rise after the 7 am rush, so on-site guests should be able to get a Rise ILL and likely one that is relatively early in the day to give some cushion for breakdowns.

My vote, assuming Rise is a must-ride for you and you are willing to pay for the ILL, would be to pay for ILL and rope drop other rides.

If RoTR is your #1 priority then it should be your #1. Get in the line and get an ILL. If you ride it twice, bonus! If not, you have 2 shots at it. Unfortunately, SDD would be icing on the cake if you get it afterwards. Focus on what will make you happiest! I know it’s a dreadful choice, but that’s what we’re being forced to do now!

A couple of considerations for you: 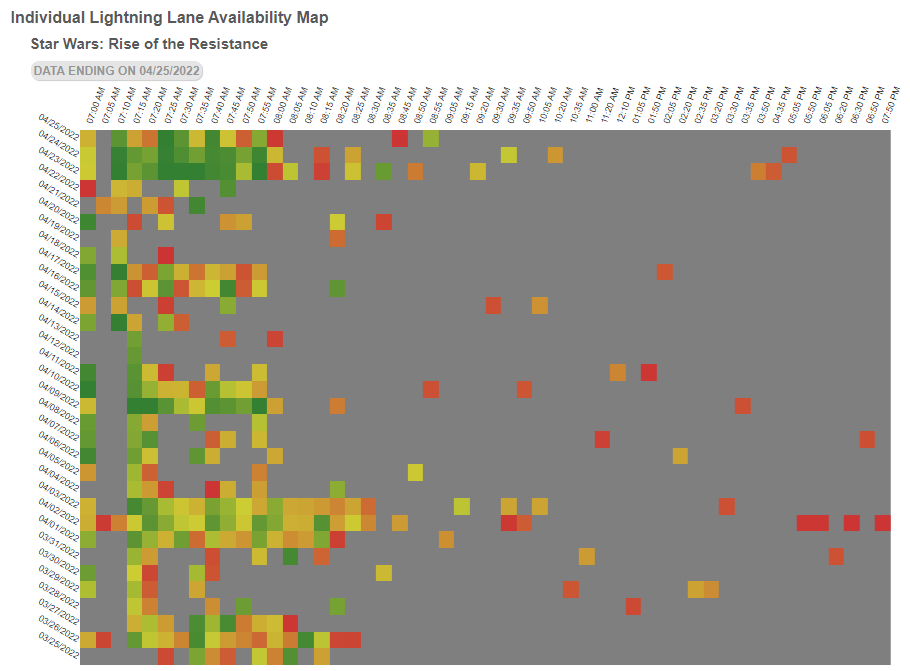 As for what you should RD, I would either wait in line for whatever you want to ride twice (RotR or SDD), OR go to ToT / RnRC, which is a good combo to knock out first thing in the morning.

If all else fails or if you want to ride twice, you can always wait standby for RotR later in the day. If it’s that big a priority, a 2-hour line won’t stop you.