How many fastpasses can you have at one time at DL?

I’m so used to the Disneyworld three daily fastpasses plus a fourth when they’ve run out. We bought the maxpass with our Disneyland tickets and this is our first time going. We’re going in three weeks. I want to make sure I do it right when we enter the park.

Technically I don’t think there’s a limit. Although I don’t think we ever got behind 3, and having 2 was fairly rare. Basically you can only book 1 at a time and then can book another as soon as you “clock-in” for your FastPass or after an hour passes. It will tell you the time you can book another.

Most of the time we found ourselves checking in to one FP and booking another to walk onto as soon as we got off the current ride. For some high demand rides though, you may not be able (or want) to get a time for a couple hours, so in those cases it gives you a time you can book another.

At DL you can only have one FP at a time whether you use MaxPass or not. With Max Pass you can get online and get your first one as soon as you enter the gates of either park, then you can get another one either when your first one is used or when the window is up (usually 2 hours later but can be shorter if your next FP is sooner).

You also don’t get to choose your FP time; the app will show you what’s available and you take it or leave it.

Just like WDW, you can link your whole party and the app will ask who wants the FP. Unlike WDW, you can only get one at a time. The benefit of MaxPass is that you don’t have to go anywhere to get a FP – people without MaxPass still have to physically walk to a FP kiosk.

You can also get FP for California Adventure while at DL and vice-versa, but still only one at a time.

During our trip last August I was able to have 3 at one time. Normally you have 1 FP, then can book your next one as soon as your window opens or an hour later, whichever comes first. That means you could have 2 FPs scheduled. So, when we had TSMM FP in the morning and the ride went down, they we’re changed to “anytime” FPs thus giving us a total of 3 active FPs.
I could tell that FPs were released throughout the day. Couldn’t get GoG first thing in the morning but times became available later in the day. In the evening we even had FPs for both Soaring and Goofy’s Flight School at the exact same time.
I also discovered that I could schedule FPs for our return to the parks while taking our afternoon swimming break back at our (off property) hotel.
I don’t know if any of these things were “glitches” that have been changed but I had only planned on 2 days of MaxPass and ended up getting it for all 4 of our days because it made our days so much easier.

I’m wondering how you ended up with two for the same exact time?! We’re using MaxPass for the first time in a few weeks and I’ll definitely keep an eye out :).

the window for making a new fastpass with maxpass is actually 90 minutes. Its usually 2 hours if you are pulling a paper pass but the maxpass gives you an extra half hour advantage.

Got it! As an aside, I can now report that we LOVED Maxpass. Between going at rope drop and using Maxpass, we didn’t wait for anything (except meeting Mickey), even with 7’s and 8’s on the crowd calendar.

Also some FastPasses (I think it might just be down to World of Color) are “disconnected” meaning they do not affect your ability to get other FastPasses in any way. So you can definitely grab a World of Color Fastpass first thing and then just go about your day collecting and using other fastpasses normally.

I’m a frequent DL goer here and I can tell you that I will frequently hold 2-3 fastpasses at a time - as long as I’m using MaxPass. It’s all about timing and being wise in your use of MaxPass. I make a point to keep track of when I can collect a new fastpass so that I can be on top of it. I should note that it’s always wise to check the MaxPass fastpass times for those rides that might have a fairly long wait. For example, I took my kids to DL at the end of Christmas break and we wanted to go on Haunted Mansion Holiday one more time. Stand-by line said 45 minutes and MaxPass was for just 15 minutes from the current time. We went over to Tom Sawyer Island and hung out for a while and then walked on Haunted Mansion. 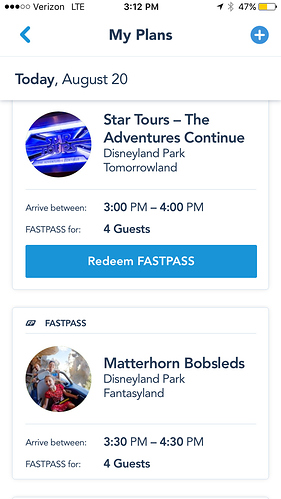 Here’s a screen shot of a time where I had 3 Fastpasses for high demand rides last August.

Here’s the first picture of that days fastpasses. 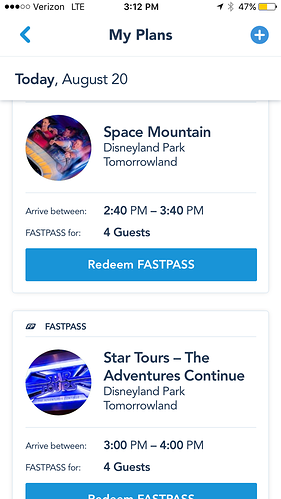 Great visual! This is especially helpful for those who have never used it and to give them a better idea of what to expect.

I LOVE Maxpass. I paid the $10 a day until I renewed my passes, and then I added it to each of our passes. We have saved so much time whenever we go. We can now routinely ride the big rides when we do late afternoon/evenings at the park. Before, we would have to RD in order to ride Star Tours or Space Mountain.

I should try and keep track of how I do my Fastpasses when I go to DL. For early mornings and afternoons. It’s always a different strategy. But we generally have a good time whenever we go!

I agree - it’s such a helpful tool. The other thing is to keep an eye out if a ride goes down during your FP window. When that happens, you’re given a “free” FP to any ride in the same park at any time during the day. That happened twice during our weekend and it worked out great.

LOL! Yes and the key here is same park! We went in Jan and it was our first time using MP and we got 2-3 “free” anytime MPs at DCA. We walked on to 3 rides in DL trying to use these. The first two rides, the CMs gave us puzzled looks, but let us in. The third pushed back, but let us on when I showed her we had the passes. No one told us we could only use them in the same park. It was probably on there, but I didn’t read it. It wasn’t until we got home and I was reading on this board that I figured out what happened. I felt horrible!