How long are bus rides?

We are staying at AoA and from reading it sounds like they have their own bus (yay!) How long does it take to get to the four parks? Where can I find this info?? Thanks for your help!

This website will give you an estimate of the travel time. http://www.ourlaughingplace.com/aspx/twiz.aspx

Plan on waiting 5-20 minutes for a bus to arrive.

Plan on waiting 5-20 minutes for a bus to arrive.

And the good news is you can tell exactly how long your wait will be with times posted at the bus stop, so you can adjust your plans (if necessary) while you wait.

And the good news is you can tell exactly how long your wait will be with times posted at the bus stop, so you can adjust your plans (if necessary) while you wait.

Is this new? We stayed at AoA in November and they did not have times posted at the bus stop. That would be awesome!

I’m surprised they don’t - All-Star Sports had them in October… that’s interesting! Maybe they are still rolling it out at different resorts?

They didn’t have them at POR last week. That would have been great!

I’m surprised they aren’t everywhere by now. They definitely came in handy.

A lot of people pooh pooh All-Stars, but I gotta say that was one amenity we loved and made great use of. We figured out that we could get to MK by way of Epcot faster than waiting for an MK bus one time. We later took a bus we didn’t have to wait for directly to MK, and the time was almost exactly the same! (Plus a great excuse to ride the monorail!)

So how do I figure out if AoA ha them??

They are big display screens attached to the wall of the building at the bus stop. I’ve also seen them (at Contemporary for example) hanging from the ceiling of the covered bus stop. There are not such displays at the parks, though. At least not that I saw.

They aren’t everywhere yet. As you mentioned, they have them at the Contemporary. But they didn’t have them at the Beach Club. And they really do make a big difference. If I had known I’d be waiting for a bus to Disney Springs for over 30 minutes, I may have grabbed an Uber.

Answering the original question… Once you’re on the bus, the ride is roughly 15-20 min to the parks, with some variance due to traffic. From AoA, MK and AK the ride will be a bit longer, EP and DHS somewhat shorter.

Which stop did you use at POR? Last time we were there, the South Depot had the wait time screens to show the arrival estimates for the buses.

I’m staying at ASMu - do they have them there too? I wasn’t aware of this!

Yes, they do. They look like flat screen TVs encased in metal boxes (weather protection I assume). They are attached to the wall on the outside of the lobby building, toward the ceiling of the overhang where there are benches to wait for the buses. 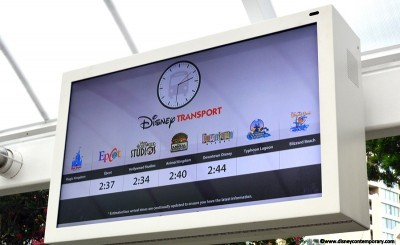 They look like this, though at ASMu, they are painted to match the wall they are attached to, not white.

There were monitors at the POR stop by the gift shop when we were there in October.

Wow, that is a nice perk for a value resort. Very happy to have this info. Thank you!

So does anyone know if AoA has the bus wait tine screens??

We just got back from Disney and stayed at AOA. Unfortunately, they do not have those screens with the wait times!! We never waited longer than 15 minutes to get a bus to the parks or coming back to the resort.

We used the west depot. Maybe south had them because they are the main stop. I never used that one!