How important is it to have interactive wands? (Mild to moderate HP fans)

We are heading to Universal (for the first time) in 2 weeks with our 11 year old triplets. Our daughters are moderate HP fans, our son is only a little interested. Wondering how important the interactive wands are, given that we’d probably end up looking to buy 3 (so ~$150 for the 3 days we’ll have in the parks). We don’t have plans to go back in the near future. If it adds significantly to the experience, we’d consider it - but if it’s only a nice to have, we might hold off. Thanks for any guidance! We are all really excited for the trip!

My husband and I are huge fans. We did only go for a day (because we are not fans of the rest of universal) but we opted not to get the wands. I was afraid we would regret it, but it was fine for us.

That being said, if your girls are super into exploring parks (as opposed to just focused on going from one ride to the next), they are quite cool and certainly add another level of magic - particularly if you expect to spend a lot of your three days exploring the HP part of the parks.

If they aren’t big fans, though, I would also
consider how much time you’ll spend back there. If you are just going to go back to ride the main rides and then move on, I would say for sure skip it - they may not even notice that they are a thing.

I’d say they’re a nice to have and we’re all big HP fans. Having said that, you never know how the kids will react when they see other kids casting spells.

Since only one person at a time can cast a spell at each location, you could be okay with buying only one wand for the kids to share. It depends on how your kids would react to sharing. The Interactive wands are very cool and fun, but the spell casting locations do get lines most of the day. If you had a rotation system where kid 1 gets to do the first spell, kid 2 gets to do the second spell, etc with a chance to come back and do the same spells (with different kids) on other days, it could save you both time and money!

Thank you, everyone! This is very helpful

. I think we may try sharing 1 wand…fingers crossed that will go ok!

If you have American Express you get a discount (or at least you did a few years ago) and it worked on the wands (we had 3 boys that all needed their own wand and it help save quite a bit!

When I was there with my 10 y/o niece, 7 y/o nephew and 5 y/o nephew, the 7 year old was the only one who had any interest in the interactive wands. He had a great time with it. I’m not sure an 11 year old would be interested unless he/she was a big Harry Potter fan.

Just get 1 and have them share, only 1 can use it at a time anyway.

I’m a nudge older than 11. I bought one and didn’t enjoy using it. I found it difficult to get the spells to work and felt self-conscious doing so. And it’s no more magic than using a remote control. I ended up giving mine away.

Why not have your kids watch other kids using their wands and ask them if they’d like one of their own. To share. It’s a huge expense for something that will be used on just one day if you buy three. Also, will they want to cast all the spells or will they get bored after the first few?

Oh almost forgot! We didn’t have luck with this, but friends of ours got theirs on eBay. We went in summer and I only looked for about a week. So peak time + not much searching time means I didn’t find one for any cheaper; but if you have time to keep an eye out and check regularly, you might get lucky. I have friends who got them for like $20 a piece that way.

When we went in February, we didn’t get interactive wands, despite being huge HP fans. We were there four days. It was fine for us just to watch others doing the wand work. My DS8, however, has become super into HP SINCE our trip (he is currently reading through Half-Blood Prince, having gotten through the rest of them) and I think of all our kids, if we were to go today, he’d want the interactive wand.

For our trip in February, he did buy a toy wand…one of those that make sounds and the tip lights up. Cheap piece of junk. Cost like $30, and was broken within a few days. I tried to fix it, but the wiring was so brittle, it couldn’t be fixed. He later bought himself a wand from Amazon. The EXACT same wands they sell in the parks (not the interactive ones), but significantly cheaper. In hindsight, had we known that the toy wand was so cheap, we should have just bought the interactive one to begin with. It would have saved us the money.

Also, a note…my DD15 bought a Fred Weasley wand. I don’t recommend that one. The handle, while cool looking, breaks easily. One of the little nobby bits broke off very quickly even thought my daughter only really has it for display purposes.

Don’t buy this one: 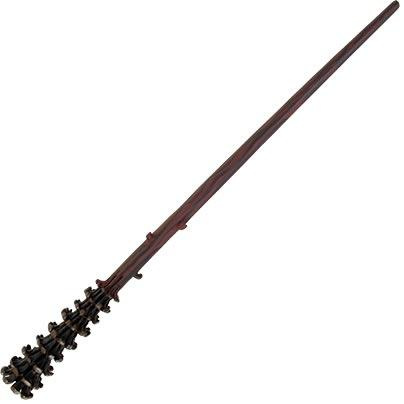 I would get them one to share, and make it clear beforehand. As said above only one person can do the spell at a time and it doesn’t work anywhere else. We are going next year and I’ve told my girls that we will be sharing. DD7 is cool with this but DD9 wants her own one. Ultimately it will be up to them as they’ll have pocket money for the holiday and if they want to blow half of it on a wand they can. Unless they get chosen at Olivanders my guess is they will both share with me.

We don’t buy many souvenirs but I had told DH before going we were going to go in knowing we were going to spend the money to buy three wands. It really added to our time in HP world and that was the kid’s Souvenir. That and candy from honeydukes! The kids really got into all HP while we were there. They took a lot of time in Ollivanders. We had prepurchased robes and the cast members called them “students”. It was really fun!