So. I’ve never been in the parks on a CL10 day, and there are a couple of them predicted for my next trip in January, over MLK weekend. Here’s the predicted CLs: 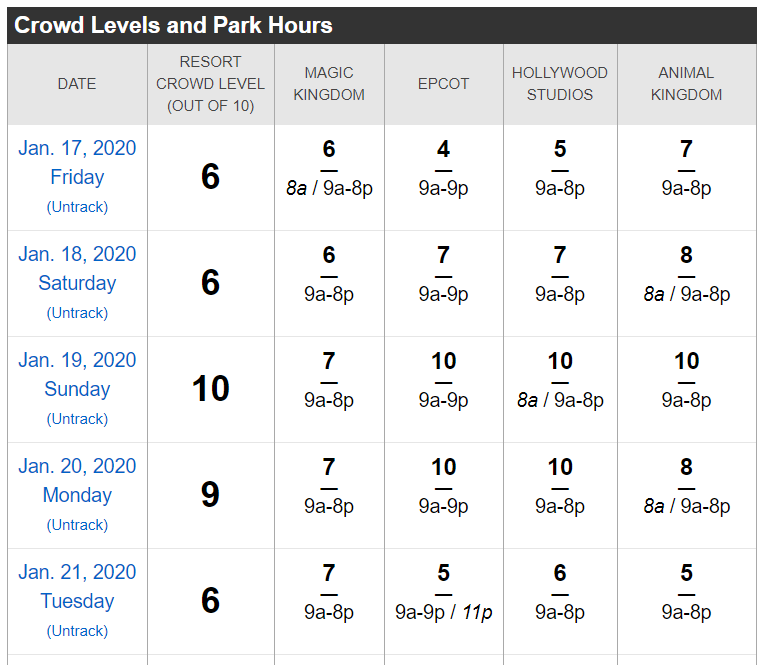 If I was planning to hop to HS the evening of Jan 20, I kind of assume we won’t be able to ride anything without super long lines – I made morning FPs at the MK, so I’d try to look for some at HS in the evening, but I’m keeping my expectations low on that. Do you think it would be so busy that it would be unpleasant to go and walk around and look at SWGE at night?

Basically, I’m wondering if we should just nix going to HS and just staying by the resort. But I assume it won’t be super warm, so it’s not like we’d be hanging by the pool… (Or if you have other fun ideas, I’m all ears!)

What say you, wise Liners?

Too busy to walk around comfortably is kind of the definition of crowd level 10.

Unless I had a VERY compelling reason to go this particular day I’d plan to visit on a less crowded evening.

You could go to Disney Springs, or do Hoop Dee Do, or the California Lounge and watch the fireworks.

Have you gone to that date and looked at the detail page that shows the expected ride waits? I think they are listed at 10am, 1pm, 4pm, 7pm and 10pm, if available. This will help you figure out what the waits are.

Of course, you could just try making a sample TP for that evening and see how it looks.

Set up a good touring plan.
Know you’re not going to see and ride as much as on a 1
But you can see and ride more than the average guest
Pack your patience
Call an audible if it’s not working out.

You are a LINER!

My last trip was over Christmas and New Year. And we’re going back next year at the same time.

I asked my family what everyone’s top 3 or 4 must-dos were for each park.
I made TPs for each park that included everyone’s list; I did have two days per park so that wasn’t an issue. Added other favourites that made sense Touring wise (I always Evaluate plans ).
Included plenty of breaks - 30 mins every 2 hours at a minimum.

The important thing is to set expectations. As a result, my family were delighted at how much we managed to do, even at our very relaxed pace.

I did MK and AK this past Jan for MLK weekend. CL10 both days (not predicted that way). Even with 6 adults and staying offsite we had no problems.

We were traveling for the purpose of taking my 2 yo niece on her first trip. So some headlines were not priorities (no BTMRR or SM). We used a PPO BOG to do 7D with no wait. Those who wanted to did RD to ride FOP - but we were also successful pulling SDFP during one of the drop times for a second ride.

As @OBNurseNH said - remember, you are a liner. I used my TP and was on the app to evaluate and optimize when needed, but I also pulled a SDFP for nearly everything we wanted to ride. I also, because of research, knew well enough how to adjust strategy when needed.

The only time I noticed how crowded it was was during fireworks and parades - I’m not big on camping out well in advance. We found spots about 30 minutes before - but the truly dedicated were staking out at about an hour - especially for HEA. If you don’t want to stake out and want a good spot, it might be worth looking at the dessert party if tickets for the plaza garden are available .

It was also obviously crowded in the areas that already bottleneck and directly after the Main Street events.

Ah this is all such good advice, thank you!

I’d purposely arrange my schedule to do HS on the CL 5 and 6 days. I’d do

So, I planned our days based on earlier CL predictions, and also because the 18th is my birthday, and we’re doing Keys to the Kingdom that Morning, and HEA that night (truly could there be a more perfect birthday than that???). Also, I really like starting at Epcot, though maybe we could skip going to TOWL that night and hop to HS instead… that’s an interesting thought.

The important thing is to set expectations. As a result, my family were delighted at how much we managed to do, even at our very relaxed pace.

Luckily my mom will probably just be THRILLED that someone other than her planned all the details of the vacation. She loves just following along with the plan (as does DF). I feel like I could say “We’re going to do x and y but it’ll be busy so we probably won’t get to do a, b, or c.”

Oh, we are for sure doing the HEA dessert party on my birthday, and I don’t think we’ll be in the park for any of the other nighttime shows except for RoL.

Overall, what I did was plan sort of according to CLs, but also according to what I wanted to do when. And since so many Liners say they don’t plan parks based on CLs, I’m sort of doing the same. ALSO, the predicted CLs have been so variable lately, especially for HS, so I’m not totally convinced it will stay exactly the same for next month’s update… we’ll see.

We used a PPO BOG to do 7D with no wait. Those who wanted to did RD to ride FOP - but we were also successful pulling SDFP during one of the drop times for a second ride.

Miraculously, I got FPs for both FOP and 7DMT (both rides that are new since the last time my mom has been). So I’ve got most of the headliners covered with FPs, and I’m hoping I’ll be able to find a SDFP for Soarin’… fingers crossed.

Ha! This make me smile. (I actually heard the Mufasa whisper in my head.)

We did ROL - If memory serves, there were two shows the night we went and even with the CL there was plenty of room in the first show. We did the Tiffins package because we like eating there anyway, but we definitely didn’t need it. We could have easily walked in to find a seat. I will say, it was cooler than most expected so that could be the reason, but I’m inclined to think the two shows was the primary reason.

We’re going to be there the same dates. Our plan is to go with the flow, follow the TP app, and tap/modify. That and lounges. I’m excited for the Festival of the Arts!

Oh fun! Where are you staying? If you see a blonde, a slightly smaller and more glamorous blonde (my mother), and a grouchy-looking man, say hi!

I am really hoping I’ll get to tap and modify, but I’ve had trouble with it on busier days—I feel like there isn’t as much to be found that’s convenient. But I will employ all my Liner tricks! I’m sure my mom will at least be impressed… I’m so used to not waiting in any lines that this weekend will certainly be an interesting test.

THIS. As I was looking at my very detailed Google Docs itinerary, I think I actually might be OK with less time in the parks and more time at the various lounges. I think I might just have us go to Geyser Point instead of braving one of the nighttime crowds…

Maybe it’s just me, but to me the solution is obvious. On your overall WDW CL day of 10, go to MK, which has a CL of only 7.

When I’m planning out a WDW trip and start planning which days I’m going to do which parks, the first thing I do is come here to the TP website, and to a CL tracker for the duration of my trip. Then I pick out for each day, which park has the lowest CL for that day. Then I create an overall plan, to optimize hitting each park however many total days I want during the trip, with the overall lowest combined CL total for the entire trip.

So unless you really want to be at a particular park, on a particular day of CL 10, and you just HAVE to do that park on that day, pick the lower parks. If I were mapping out your vacation, and you wanted to do a park on the 19th, I’d absolutely pick MK, to avoid the CL 10 at the other three parks.

FWIW, I’m doing a WDW trip on those same dates that you are, and that’s exactly what I’m doing, going to MK on the 19th.

GP was our chosen “break” on our CL 10 MK day - we watched the parade, met Mickey and then headed out. We came back after a leisurely dinner and drink to watch HEA and ride a couple rides (with FPPs that we picked up).

We’re at SS. I’ll be with my DH and another couple.

Then I pick out for each day, which park has the lowest CL for that day. Then I create an overall plan, to optimize hitting each park however many total days I want during the trip, with the overall lowest combined CL total for the entire trip.

That works in theory for me, but 9 times of out 10 the CL predicted when I make my plan at either 180 or even 60 days out changes considerably as we get closer. Now that FPP are in, changes are minimal.

Yeah, that’s my situation too – I’m just not going to change the days I’ve planned for which park at this point (52 days!), because I’ve got FPs and tours and TS reservations all set. Also, since it’s my birthday trip, I did have a specific order of the parks – start at Epcot, then Magic Kingdom for my actual birthday. (Because, magical.) I’m just crossing my fingers the CL predictions come down a bit!

We’re at SS. I’ll be with my DH and another couple.

Oooh fun. I really need to go over to SS and poke around – now that DF’s a DVC owner I’m curious to see all of the DVC resorts I’ve never seen before.