How do I get TP to recommend FastPass+ times

I keep seeing people discussing that TP can make Fastpass+ suggestions. Is it just suggesting which ride to use it on or will it recommend a time to try to reserve it for? I’m coming up on my 60 day mark tomorrow, but I can’t get it to work. I don’t want to pick fast pass times that won’t help.
Thanks

I found this very useful

OK, I'm making an effort to give this "brave new world" a try, so I'm going to post my popular thread here. Sorry for the choppy feel of it, but remember that it was originally designed with the 255 character limit

After much testing plus some helpful discussions with @len, I have come up with an updated method for making Optimized PTPs with FPP reservations. I think that this method is a little more straightforward, but please give me any feedback you may have. Before we start, a …

I’m having the same issue with my Epcot day. (I’ve tried following the optimize suggestions on the post provided by brklinck)

I’m not sure if that’s because it’s a crowd level 2 on my day, but then the plan also has me walking back and forth all over the place even with minimize walking set like this: 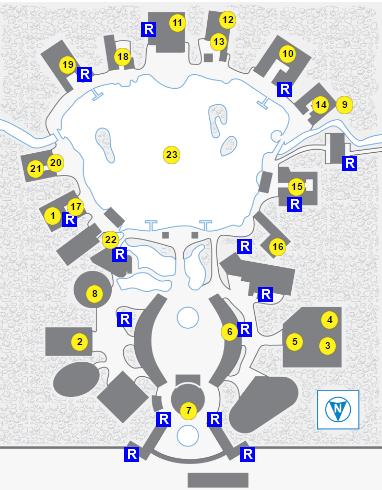 I’m not sure if that’s because it’s a crowd level 2 on my day, but then the plan also has me walking back and forth all over the place even with minimize walking set like this:

One thing to bear in mind is that “minimize walking” does not come up with the plan with the least walking. The main purpose of the Optimizer is to minimize wait time, and “minimize walking” just puts a little bit more of a penalty on walk time when determining a plan. In your case, without the bouncing around you may find that the plan would have a lot more wait time.

That being said, I always find that Epcot WS provides some challenges to the Optimizer. In your case I would take the first 8 steps in the order presented, and then just put the remaining attractions in counter-clockwise order and evaluate.

Epcot WS provides some challenges to the Optimizer. In your case I would take the first 8 steps in the order presented, and then just put the remaining attractions in counter-clockwise order and evaluate.

I’ve noticed about WS and your suggestion is pretty much my plan.

I just keep torturing myself by hitting “optimize” every so often to see if it will give me something better or if I adjust the time we enter the park because I really don’t know exactly what time we’ll go on that particular day.

I assumed minimize walking would stop the back and forth since the other option on that scale is minimize waiting, but from what I can see in this day’s particular plan – that’s not the case at all.

Optimizing the WS part isn’t really going to do much good because there’s really not anything back there to optimize, as far as lines go except FEA, and if you want to see a lot of the live entertainment then you probably will actually have to walk back and forth a lot just because of the way the schedules tend to line up. They don’t really fall into a timetable that would allow you to move efficiently in one direction or the other and just see the next thing as you arrive.

My strategy for this day would be to first make a FW-only optimized TP that will give you an idea of how long you’ll need before WS. Since you don’t know what time you’ll arrive, for now just assume that you’re arriving at 10:00, so low RD lines don’t skew your wait times. Then you can use that info to do the same thing for WS, only don’t optimize. Instead arrange things in logical order and evaluate… whenever you run into the show scheduling issue you can decide whether to backtrack for that thing, or forgo it. That will tell you how long you should take to see all of WS, and once you know that you can go back and adjust your FW arrival time accordingly.

Taking my own advice (since my chosen Epcot day is also a CL 2, and not going to be a RD kinda morning), I just did separate FW and WS TPs… I put nearly every non-seasonal thing in the WS into the TP, set it to start at at 12:30, and lo and behold it gave me a plan that goes exactly in order, clockwise.

If I change the start time to anything later than that, though, it starts with the backtracking, because the final Voices of Liberty and Sergio shows are at 5:00 and 4:40. With a 1:15 start (which is based on a 10:00 start FW plan that includes FPs for Character Spot, Soarin at 10 & 11… it ends just after 1, after Spaceship Earth) the backtracking isn’t too bad, though… it now starts in France and moves counter-clockwise, to hit a 6:00 FP for FEA and eventually end in Canada/UK before Illuminations.

This does not include specific meal breaks, however there is an extra hour between the final steps and Illuminations, and it is scheduled to hit the FEA FP just after 60, so there would be time for a dinner somewhere between the end of Sergio (in France) and FEA, or anywhere between FEA and Illuminations because nothing except FEA has an actual schedule or a wait to speak of. It also has Agent P as the first step at 1:15, which could definitely be swapped for a QS lunch (either Electric Umbrella or Les Halles in France would be a logical choice there). Another option would be to arrive 30 minutes earlier… you’re not likely to have measurably longer waits for anything in FW.

Here are the plans I made, if you want to look at details for inspiration…
FW morning TP
WS afternoon/evening TP

Thanks! I can’t see your plans though.

I will try 2 different plans. I don’t plan on making it a RD day either since we’ll be at MNSSHP the night before and unsure of wake up time. We are planning to drink around the world so I definitely need enough time to space that out without motion sickness potential rides at the end of the night (although I seem to have less problems with that when I’m drinking, at least on a cruise ship!)

Well, if you start the WS at 1:15 then you have the next 8 hours in WS, uninterrupted by anything but the very tame FEA… plenty of time to get merry!

Hi Chann856,
Thanks for the info. I also emailed the webmaster and was told that the fastpass+ with suggested times were from the pre-planned tours. The software doesn’t recommend specific times for custom touring plans, but will list best attractions to use Fastpass+ on. For custom touring plans they suggested doing it the way you outlined which is what I did.
I was able to get all of the fastpasses I wanted yesterday on my 60 day mark! I even got Frozen-ever-after, Seven Dwarfs Mine Train, and Flight of Passage, but by 7:02am FoP only had afternoon times left.
Apparently, there is some frantic mouse clicking going on!